Labor can’t face the challenges ahead if the party remains focused on bitter battles and disputes of the past. 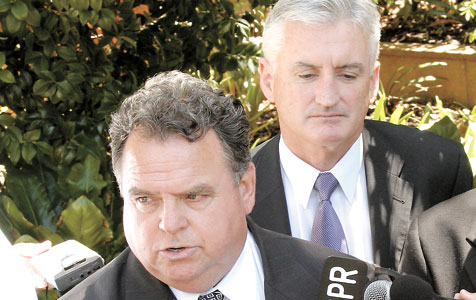 Politics has always been a hazardous business. Reporting on it can also have its moments, especially if you a have a book published on key participants, as I found out on a recent Friday night in Rockingham.

Gary Gray, the Labor member for Brand, had invited me to ‘launch’ my new book, Tales from Boomtown, at a function he was organising. On such occasions, comments are usually made about the book and author, who is invited to address the topic.

It was an interesting audience. It included two former state Labor ministers Julian Grill and Norm Marlborough, and former union leader Kevin Reynolds, all of whom had given interviews to me for the book and are friends of former Labor premier, Brian Burke.

About 60 people were at the function, which started with Mr Gray saying some kind words, followed by Labor’s treasury spokesman Chris Bowen, who spoke of the value of such books on the recent political past.

I spoke about each of the 11 premiers I have known and interviewed during my career, starting with Sir David Brand and ending with Colin Barnett, both Liberals, of course.

Then Mr Marlborough spoke, opening with the comment that he thought I had been a “Labor supporter”. He then attacked the Brand government for delaying the introduction of local government into the Pilbara in the 1960s, and Sir Charles Court’s government for insertion of the infamous Section 54b clause regarding public gatherings into the Police Act.

But he saved his strongest criticism for former Labor premier Geoff Gallop, who had joined with his Liberal predecessor, Richard Court, at the formal launch of my book on April 23.

Dr Gallop had blocked Mr Marlborough's elevation to the cabinet.

There was also an interjection from the audience that another former Labor premier, Alan Carpenter, who tangled with Messrs Burke and Grill over their lobbying activities, had been a “failed journalist”.

Had I been invited to reply, I would have made these points.

1. I am not a ‘Labor supporter’, I am a political journalist. As such, all parties should expect and receive similar treatment for their successes and blunders.

2. The new Pilbara communities in the 1960s were company towns. Key facilities, including housing and roads, were built by the mining companies. Local government councils at that time were elected by ratepayers only. That eventually changed.

3. Section 54b was draconian legislation. Among other things it required police approval for public meetings of four or more people, and was a direct response to the industrial free-for-all in the Pilbara at the time. It was ham-fisted, and it would take another six years or so for the industrial chaos to be resolved. But it was hardly the most defining policy of Sir Charles’s term – unless you have a very jaundiced view of history.

4. Geoff Gallop was determined there would be no questionable processes in his administration. He succeeded.

5. Alan Carpenter was a widely respected journalist. His term as premier was dogged by ministers being found wanting in public proceedings in the newly formed Corruption and Crime Commission. In response, he disciplined them. The ministers included Mr Marlborough. A more subtle response by Mr Carpenter would have been more politically astute.

Mr Burke has, like several other former premiers, and Mr Barnett, readily agreed to sign a number of my books, which have been snapped up.

But with WA Labor polling so poorly in the recent half-Senate election, I would have thought alarm bells would be ringing across all sections of the party and its supporters about the challenge ahead. Apparently not.

One premier I didn’t write about in my book, but with whom I had close dealings, was the late New South Wales leader, Neville Wran. I came in contact with him while reporting on NSW politics for The Sydney Morning Herald in the late 1970s.

Mr Wran was the best politician I have observed never to become prime minister, but he had harboured ambitions for the top job. A successful industrial barrister and QC before entering politics, one of his favourite pieces of advice was the importance of ‘keeping your feet on the ground’.

With regard to personal ambition, Mr Wran said: “Look, I wouldn’t get anywhere in this business if I wasn’t wearing the Labor colours. I’d hardly get a vote.”

My relations with him weren’t always harmonious. In fact they broke down when I described as “draconian” some legislation he had pushed through to counter a threatened truckies blockade of Sydney.

In his younger days, Mr Grill played for the Subiaco Football Club when the sole field umpire often called ‘fair bump, play on’.  It’s good advice in politics as well.  Many of the contentious issues consuming these former MPs occurred more than 20 years ago. It’s time to move on.