WA’s tourism treasures often seem to be doing it tough, so why can’t the locals be more involved in deciding their region’s future? 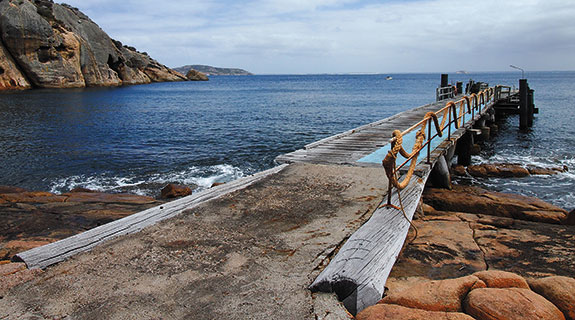 My family and I recently spent a couple of days offshore, so-to-speak, at an island retreat.

No it wasn’t Rottnest, my usual favourite when indulging my penchant for sharing holiday adventures (if only in an abstract way).

This time we ventured to the eastern fringes of Western Australia’s southern coast, to Esperance – a town that, in my view, gets a lot of things right.

From there, it is a short boat ride to Woody Island, the kind of alternative tourism option our state should have more of – celebrating the simple and remote isolation that, in truth, is one of WA’s biggest strengths.

The 240-hectare island is a little unusual among the numerous isles that dot the waters off Esperance at the western most edge of the Recherche Archipelago, which stretches more than 100 kilometres east to Cape Arid and beyond.

Woody Island is so-named because it has trees, a stark contrast to most of its neighbours, which are mainly windswept rocks that, at best, offer a few shrubs clinging to the granite.

Its size and vegetation means the island has been subject to human interaction for a century or so, although even less congenial isles have hosted sealers and grazing herbivores since the arrival of Europeans in the 19th century.

In the 1950s, Woody Island’s sheep were removed and it became a nature reserve.

It has been a regular visiting place for tourists and holidaymakers since the 1970s when Esperance’s seafaring and logistics group, Mackenzie Marine & Towage, started taking people there.

In 1995, Mackenzie obtained a 28-year lease, which allowed it to develop a niche eco-style resort with infrastructure that includes a magnificent visitor centre, with semi-permanent ‘safari’ tent accommodation and a campground.

It was clearly quite successful.

I am quite surprised by that because, despite being to Esperance several times since the early 1980s, I was unaware of the existence of Woody Island until a few years ago.

It’s a pity, perhaps, that it isn’t better known because it is the sort of alternative experience that many people – both locals and those from outside WA – are seeking.

Many of these islands can be seen from Esperance harbour, enticing visitors.

Who knows whether it’s been commercially viable? I understand Mackenzie has ceased operating tours to Woody Island and managing the resort, although it still holds the lease.

Its core business was tugboats and storage.

Esperance has certainly had the kind of major commercial growth to suggest that tourism may no longer have held the attraction it did.

In 2012 the WA Department of Environment and Conservation’s draft management plan for the area revealed that negotiations were under way to transfer the lease to this new operator, although a two-year trial had been requested.

From what I understand, that process has not been completed and the potential improvements to the island remain in limbo because of the lack of certainty.

In my view, Woody Island is in need of an upgrade.

A new operator ought to have a free hand to bring such an outstanding tourist location up to date, especially when they inherit facilities that have done decades in an extreme maritime environment.

Due, no doubt, to the sensitivities of negotiating with other parties, the new operator declined to discuss the issues with me when I called as a reporter following my return to Perth.

However, it was patently clear from being on the island that the changeover in operators has been far from perfect and is most likely holding back the kind of refurbishment and transformation a new owner typically brings to a hospitality and tourism venture.

I’d bet that the current uncertainty creates an environment that reduces the incentives for business to invest the capital required to maintain standards.

And, no doubt, regulatory burdens would add further cost to what is probably an expensive place to maintain and develop.

It is a bit of a common refrain for many of our unique locations.

In some ways it’s a mini-version of Rottnest, which has finally, let’s hope, managed to secure a muchneeded revamp of its upmarket accommodation after years of disappointment.

Let’s also hope the policies or bureaucracy within the department responsible for Woody Island are not part of the problem.

It seems incongruent to me that a conservation-minded department manages tourismfocused places like this, which should be a jewel in Esperance’s crown.

Perhaps that kind of empathetic oversight should be done at a local level.

Esperance shows how efficiently a small town can make good decisions to benefit industry and residents, because the big hand of government is just so much more diminished in a place where everyone knows everyone.

Despite the lead scare of a few years ago, mining has been allowed to expand and grow.

The harbour has been expanded, along with the road and rail network restructured to cater for that in a way that is sympathetic to the town’s other operations – as a rural service centre and tourism destination.

The town has a thriving (or so it seemed to me) retail sector, the foreshore has been redeveloped to create a stunning setting, and housing is allowed along the coast so that (heaven forbid) there are ocean views.

Special credit must go to the people who run Taylor’s Beach Bar; a venue right on the beachfront and a prime example of how to use waterfront assets.

And I didn’t see one Lock the Gate or anti-GM food sign within hundreds and hundreds of kilometres.