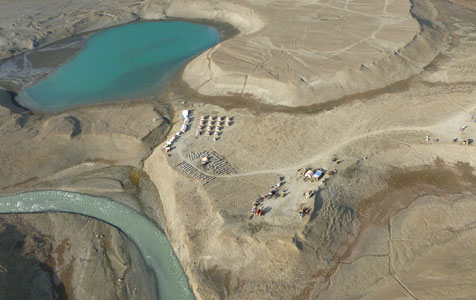 The workers camp at the Citronen base metals project in Greenland.

Ironbark Zinc shares jumped on the ASX today, after it released a report indicating the viability of its Citronen base metals project in Greenland.

The bankable feasibility study flagged a capital cost of $US484.8 million for the Citronen project, which is forecast to bring in life-of-mine revenue of $US5.65 billion.

Operating costs would be $US0.68 per pound of zinc, with smelter fees an additional $US0.22/lb.

Citronen has a net project value of $US609 million, Ironbark said.

The feasibility study incorporated a recent review of capital costs and an updated resources statement from late last year.

Managing director Jonathan Downes said the company was delighted to prove the Citronen project as a base metals operation of global significance.

“Located in Greenland, a nation actively seeking to foster a mining sector to help support its economy, Citronen’s mine life of 14 years is defined only by the limits of drilling to date,” Mr Downes said.

“As such, one of the project’s most exciting aspects remains its exceptional exploration potential with identified mineralisation remaining open in almost every direction.”

Ironbark holds a memorandum of understanding with China’s Nonferrous Metal Industry’s Foreign Engineering and Construction Co (NFC), for a fixed price engineering and construction contract for the mine.

The agreement comprises a 70 per cent debt funding proposal through Chinese banks and gives NFC the right to purchase a 20 per cent direct stake in the project.

Ironbark said the feasibility study was being presented to NFC, and a formal agreement would be coming towards the end of this year.