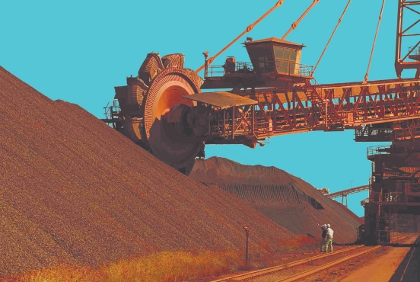 IronClad Mining has signed a second off-take agreement for ore from Wilcherry Hill.

IronClad Mining says it will ramp up construction at its Wilcherry Hill iron ore joint venture, after signing a four-year offtake agreement with a Chinese firm.

Ironclad announced today that Hong Kong-based resources investment group New Page Investments, which invested $6 million in IronClad last month through a share placement, would take 50 per cent of annual production from the Wilcherry Hill mine for its first four years.

Ironclad is developing Wilcherry Hill in an 80:20 joint venture with Trafford Resources.

New Page Investments is a major shareholder in Chinese steel trading, distribution, processing and manufacturing firm Novo Group, which is dual listed on the Hong Kong and Singapore stock exchanges.

The agreement secures all iron ore produced from the mine for its first two years, and follows a two-year deal signed with a Singaporean trading company.

IronClad executive chairman Ian Finch said inaugural shipments of direct shipping ore from Wilcherry Hill for sale to Chinese steel mills were due to commence in the second quarter of this year.

“Today’s announcement with New Page Investments not only bolsters our order book but, significantly, paves the way for heightened construction activity at the mine site,” Mr Finch said in a statement.

“Under the terms of the new agreement, New Page Investments must pay IronClad 95 per cent of the agreed value of iron ore leaving via ship from our Lucky Bay port facility, within 30 days of that ship departing.”