Business News' annual export review charts the state’s reliance on a handful of major companies and commodities, despite the emergence of new players. 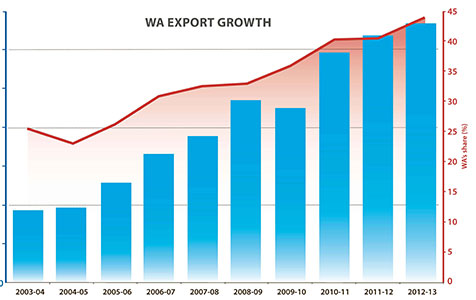 Business News' annual export review charts the state's reliance on a handful of major companies and commodities, despite the emergence of new players.

If any single statistic shows Western Australia’s success as an export powerhouse, it is the state’s growing share of national exports.

Ten years ago, WA accounted for a quarter of Australia’s total exports. Over the past decade, that share has grown to 44 per cent.

This rise has been driven primarily by the growth in iron ore exports, which account for about half the state’s total exports.

With big players such as Rio Tinto, BHP Billiton and Fortescue Metals Group continuing to expand their production capacity, iron ore will continue as WA’s largest export commodity for many years to come.

Liquefied natural gas (LNG) is set to drive the next wave of export growth, as projects such as Gorgon, Wheatstone and Prelude are commissioned.

Other commodities that make a big contribution to the state’s exports include crude oil, gold, alumina, and grains.

And education and tourism continue to be significant generators of export income.

BHP Billiton remains the state’s largest exporter, according to analysis by Business News.

BHP made a total contribution across its iron ore, petroleum, alumina and nickel businesses of $23.9 billion. That equates to nearly 20 per cent of the state’s total exports in the year to June 2013.

By far the largest contributor was its 85 per cent owned WA iron ore business, which produced exports of $18 billion.

From a single business perspective, the state’s largest exporter continues to be Rio Tinto Iron Ore, which had sales of $21.4 billion.

Rio and BHP both experienced a slump in the value of their iron ore exports following a sharp fall in iron ore prices earlier this year.

In contrast, FMG achieved further growth in the value of its iron ore exports, as continued rapid expansion of its production volumes outweighed the impact of lower prices.

FMG achieved sales of $7.9 billion last year, lifting it ahead of GoldCorp to be ranked as the state’s fourth largest exporter.

This estimate is derived from Woodside’s annual accounts, which disclose the revenue from its one-sixth stake in the NW Shelf venture.

Woodside also qualifies as a major exporter in its own right following the successful commissioning and production ramp-up at its 90 per cent owned Pluto LNG plant.

In the half year to June, Pluto made nearly the same contribution to Woodside’s LNG sales as did the NW Shelf.

Woodside also has a substantial oil business that contributed to its export sales, which increased to $5.7 billion last financial year.

Peak business group the Chamber of Commerce and Industry WA has tracked the state’s export success, and found that exports have grown in 10 of the past 11 years. The one exception was during the GFC, when export values slumped.

CCI expects further strong growth in exports over the next two years, after a gain of 8.4 per cent last year.

The Bureau of Resources and Energy Economics (BREE) also has a bullish view on export values, according to its latest quarterly review.

Mineral commodity exports are forecast to grow by 18 per cent to $127 billion in 2013-14, “mainly due to substantial growth in iron ore exports”, which are overwhelmingly from WA.

Energy commodities are predicted to grow by 9 per cent to $76 billion, underpinned by higher earnings for LNG.

Looking further ahead, the BREE expects a positive outlook for Australia’s mineral and energy exports.

The bureau projects national export earnings to increase at an annual average rate of 11 per cent to reach $294 billion in 2017-18.

Within this total, iron ore exports are tipped to grow by 10.2 per cent a year in volume terms but a modest 6.4 per cent per annum in value terms.

A much larger growth driver will be LNG, as projects including Gorgon and Wheatstone in WA, Ichthys in Darwin, and three major Queensland projects come into production.

The most notable example is Japanese trading house Mitsui & Co, which is a big investor in some of the state’s largest mining and petroleum projects.

Mitsui’s share equated to annual exports worth an estimated $2 billion.

The Japanese group also has a 7 per cent stake in BHP’s WA iron ore division, which produced 187mt last year. Its share equated to an estimated $1.5 billion.

Mitsui’s third major WA asset is an 8.33 per cent stake in the North West Shelf Venture, which would add $1.4 billion to its attributable exports.

Collectively, Mitsui’s share of exports from the three projects is $4.8 billion, making it the state’s 7th largest exporter.

Its partners in Robe River include Japanese companies Nippon Steel (10.5 per cent) and Sumitomo Metal (3.5 per cent).

Other investors in Rio’s iron ore mines include China’s Sinosteel, which holds a 40 per cent stake in the Channar mine, and Shanghai Baosteel Group, which owns 46 per cent of the Eastern Range mine.

Sinosteel has aspirations of being a WA miner in its own right, after paying $1 billion some years ago for local company Midwest Corporation.

However its plans are dependent on the Oakajee port project proceeding.

Another very prominent partner in Rio’s mines is Gina Rinehart’s Hancock Prospecting, which owns half the Hope Downs mine.

Together they own 15 per cent of BHP’s WA iron ore business, including the mines, rail and port infrastructure.

The two Japanese companies agreed earlier this year to invest a further $US1.5 billion in BHP’s Jimblebar mining hub and resource, maintaining their ownership interest across the group.

Jimblebar’s production capacity is being expanded to 35mt as part of BHP’s plan to lift its capacity to 220mt.

Another BHP business with long-standing joint venture owners is Worsley Alumina, which has a bauxite mining operation at Boddington and an alumina refinery at Collie.

Its partners in this project are Japan Alumina and Sojitz, which collectively own 14 per cent.

In the oil and gas sector, Mitsui was a foundation investor, along with its partner Mitsubishi Corporation, in the Woodside-operated North West Shelf venture.

Other investors in the venture include global petroleum giants BP, Chevron and Shell.

Similarly, Shell will join the ranks of major WA exporters after commissioning of its Prelude floating LNG development.

In the petroleum sector, other exports on Business News’ top 20 list (see page 14) include Apache and Santos, which own or operate a number of offshore oil fields.

A new entrant to the list this year is Sandfire Resources, after the company completed its first full year of production at its DeGrussa copper mine.

It is ranked this year as the state’s 12th largest exporter with sales of $1.7 billion; when Business News launched the Biggest Exporters feature, it was ranked number five with sales of $4.3 billion.