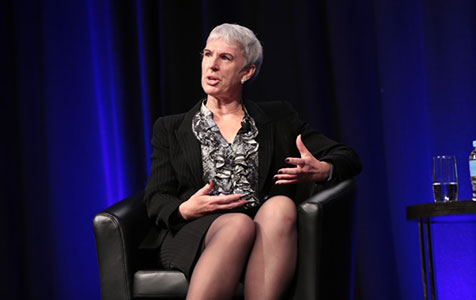 “I think we’re already starting to see the shake-out occur, it’s not just iron ore, it’s going to be coal in the east as well,” said Ms Smith-Gander who chairs ASX-listed Transfield Services and sits on the board of Perth-based giant Wesfarmers.

“We saw Bandana Energy, one of the Wiggins coal terminal partners, go into receivership in the last couple of days, so I think it’s almost inevitable if the prices keep sagging.”

She said the ideal structure of the iron ore industry was a tricky question.

“From an economist’s point of view, you would say if you’ve got two very large companies, as we have in the iron ore sector here, that probably the most efficient way to manage that industry would be in a duopoly structure.

“But that’s clearly not the way that our current regulatory and policy settings in Australia see as being the most effective way to go.

“I think as a nation the question is more broad than the industry sector."

“So I would’ve thought that our regulatory and policy settings should be to allow us to be world-class regulators of those sorts of industry structures, when in fact I think we put a lot of energy into trying to create perfect market analogues,” she said.

When questioned about the size of the Wesfarmers board, she said that strict rules about size and market capitalisation need not apply.

“A board is all about diversity," she said.

“You learn early on in your career that if you’re the best at everything in your team- you’ve got the wrong team.”

Gender diversity was a part of that, but is also a larger issue across the economy, she said.

“We’ve got to get away from the feeling that it’s politically incorrect to have a conversation with a woman about how she’s going to manage her children," she said.

“I think we have to have those conversations with men as well … I think men want flexibility as much as women.

“The biggest productivity lever we can pull in this country is to improve female participation in the workforce and to stop throwing away the skills that women build through their education and career experiences when they get to a career break."