The big commodities exporter has stolen a march on Australia with a China deal to use giant ships at cheaper rates. 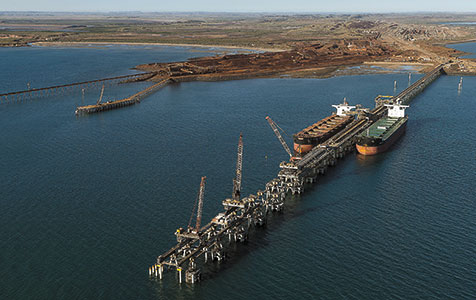 Brazil’s carriers deal will put the squeeze on BHP Billition and Rio Tinto, which use smaller vessels. Photo: Rio Tinto

Western Australia has been China’s favourite source of iron ore for more than 20 years, but it could be another story over the next 20 with one of the state’s most important ports reaching its growth limits just as Brazil finds a new way to win a greater share of the China market.

Port Hedland, the home for the export operations of BHP Billiton and Fortescue Metals Group as well as a number of small miners will soon be joined by Gina Rinehart’s Roy Hill mine, which is scheduled to start shipping around this time next year.

In theory, Port Hedland could squeeze out a few more ships each week, but the ‘port full’ sign is not far away, which is one reason why BHP Billiton has designed an outer harbour to cope with future expansion – and possibly for bigger ships than the current Capesize, which ranges from 150,000 tonnes carrying capacity to as much as 300,000t.

Brazil, which is much further from China, has until now, also favoured Capesize vessels for its exports to the world’s biggest consumer of seaborne iron ore, with the extra 20 days sailing time from its ports, yielding a substantial freight-cost advantage for Australian miners.

Unfortunately, that advantage might not last much longer, for two reasons.

The first is the squeeze developing at Port Hedland and the failure of BHP Billiton to proceed with its outer harbour development plan, which would have seen a lot of its shipping exit the narrow (and relatively shallow) waters of Port Hedland.

The second is that Brazil has just struck a sweetheart deal with China under which an entirely new class of super-sized bulk ore carrier could be admitted to Chinese ports.

Three years ago the world got its first glimpse of a VLOC, or very large ore carrier, a monster ship with a carrying capacity of 400,000t per shipment.

Also known as Valemax ships after their promoter, Brazil’s Vale mining company, their early years have been a wipeout with China, apart from one visit by the first VLOC, banning the super ships from its ports, allegedly on safety grounds.

The truth, as is so often the case with anything to do with China, was far more commercial than a simple safety issue, with the Chinese upset that they did not build the ships, or own them, or operate them.

Vale did all of that, and then tried to inject them into Chinese ports and achieve a dramatic saving in freight costs.

Rather than being allowed to dock its Valemax super ships in Chinese ports, Vale was forced to construct a floating storage system in the deep harbour at Subic Bay in the Philippines, once the home of the US Seventh Fleet.

Double handling costs incurred by having to unload Valemax ships at Subic Bay and then reload into smaller Capesize or Panamax-size ships negated any advantage gained from using the 400,000-tonners.

What the peace treaty means is that Brazil will soon be able to enjoy the full benefits of the giant carriers, which are too big to enter Port Hedland with its notional maximum ship size of 320,000t, but with most carriers much smaller than that.

The deal with China, under which more VLOCs will be built by Chinese companies and with ownership transferred to Chinese ship operators (before being provided on a 25-year lease to Vale), carries a number of messages.

It means that China has found a way to cut the freight cost from the long haul around the tip of South America, with the cost per tonne dropping by as much as 33 per cent.

It also means that Australia is slipping behind Brazil in terms of infrastructure capacity which, in bulk commodity terms, simply means the bigger the better (and cheaper).

BHP Billiton’s decision to mothball its outer harbour plans for Port Hedland were seen until recently as a nuisance rather than a game stopper.

When combined with the expansion of the fleet serving iron ore mines in Brazil, both in number and tonnage, the problem becomes somewhat clearer – and it comes at just the wrong time for WA’s iron ore industry.

Not out of Africa

IF there is any good news in the iron ore price (and Brazilian tonnage) squeeze it lies in the fact that once grand plans to develop a series of mines in West Africa are highly likely to be shelved, including Rio Tinto’s African flagship, the Simandou project in Guinea.

One reason for kissing goodbye (for now) to Simandou and a number of other iron ore projects in West Africa is the latest outbreak of Ebola, and while company executives play down the threat it is very real.

But more significant reasons behind Simandou and other projects returning to a filing tray marked ‘pending’, is that the world’s steel industry simply does not need a new source of ore, and investors are wary of supporting a fresh burst of executive-driven project development.

Simandou and other projects are classic examples of management (also known as hired help) using shareholders’ funds to build an empire.

It’s fun while it lasts but at some point the owners of the money being used to erect monuments to management blow a whistle and say ‘stop’.

Ivan Glasenberg, the chief executive and one of the major shareholders in the big commodity trader and miner, Glencore, blew his whistle last year and called on everyone in mining to stop building new mines because excess capacity was killing the industry.

His call is now reverberating around the mining world, with shareholders demanding a halt to management empire building at a time of flat-to-falling commodity prices.

WESFARMERS, which prides itself on being the last of the big diversified industrial companies on the Australian Securities Exchange, is being pressured by its critics to rebalance its retail-heavy portfolio by acquiring a new business, which is not in retail, such as its sector-leading Coles and Bunnings brands.

If that message is accepted by management the next question is whether now is the time for the Perth-based business to make its overdue offshore move with an acquisition in Asia – perhaps in China, which is the latest topic of chatter among Wesfarmers watchers.

The world is full of willing people. Some willing to work, the rest willing to let them.