Almost half of revenue reported by WA’s top 20 public resources companies can be attributed to iron ore miners amid an industry boom. 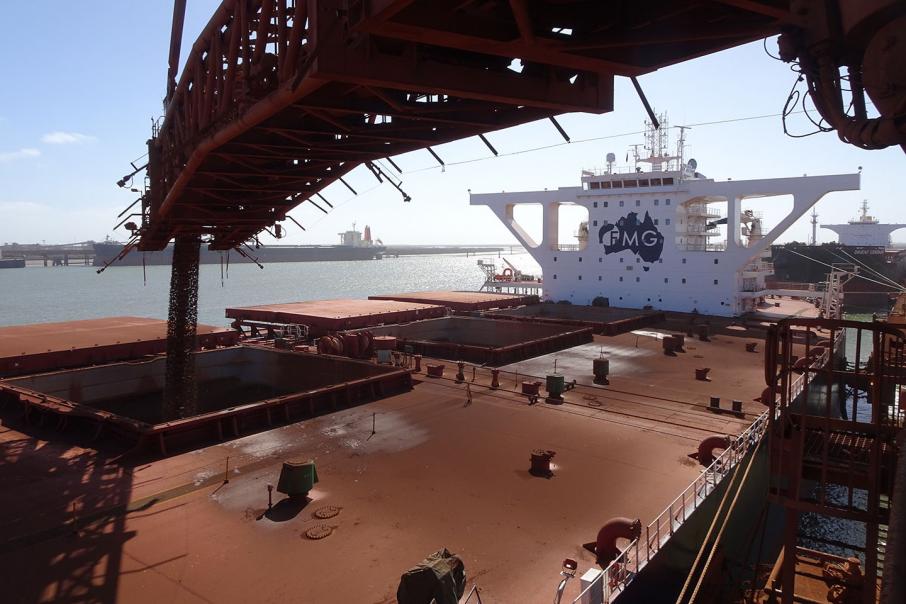 Fortescue will have the capacity to ship 188mtpa of hematite ore, as well as 22mtpa of magnetite concentrate sourced from Iron Bridge. Photo: Gabriel Oliveira

The rush to gold by investors in the aftermath of the GFC was hardly unexpected.

What may have surprised analysts at the time, however, was China’s embrace of iron ore, which ultimately saved Australia from a recession 10 years ago.

And although the economic impact of COVID-19 has reached deeper than the GFC, that situation seems to be playing out again, with iron ore producers and goldminers insulated from a wide-ranging economic malaise. 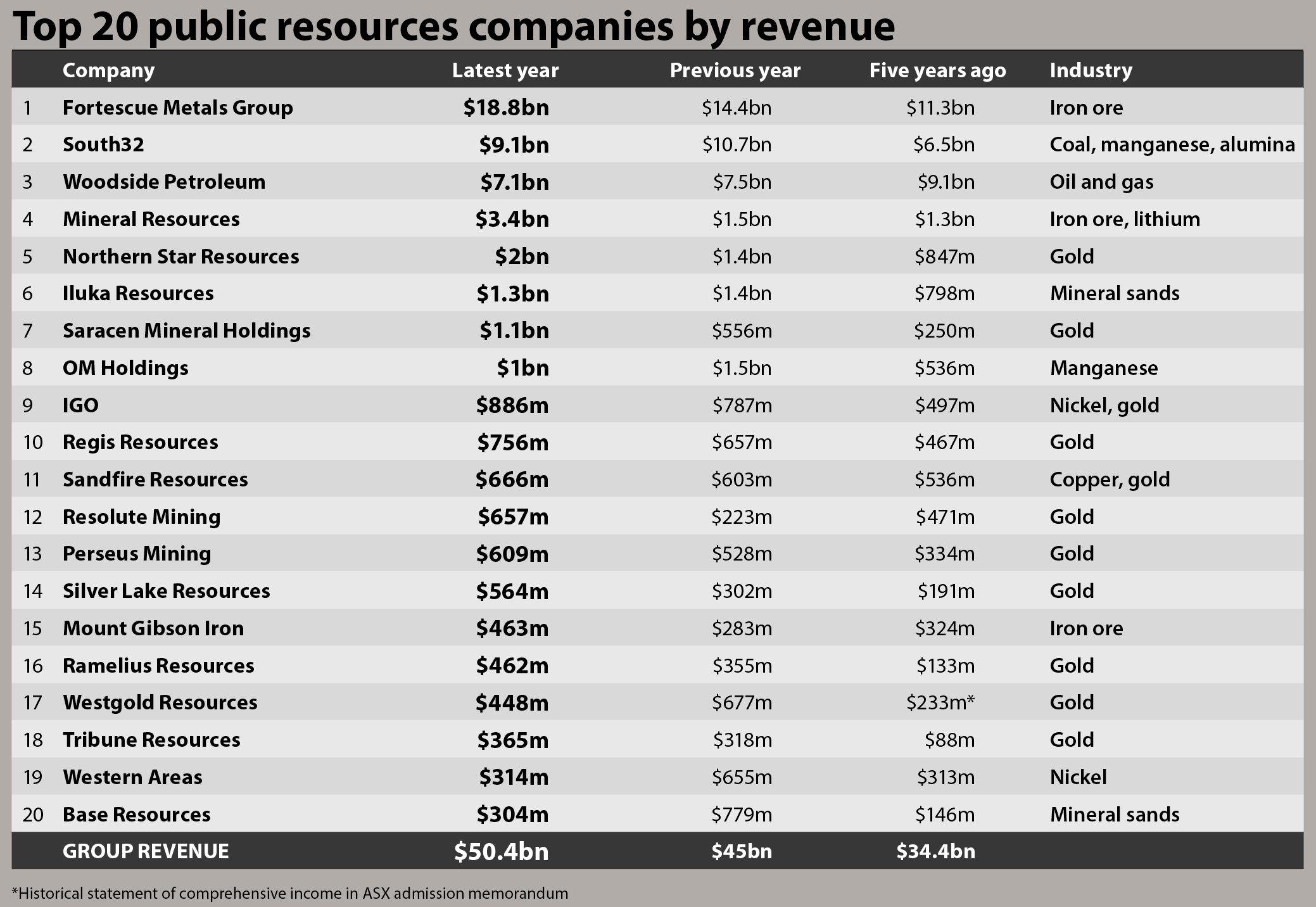 That figure has climbed 12 per cent in just one year and by 47 per cent over the past five years.

Half of the top 20 companies were goldminers, which contributed $8.5 billion in revenue, helped by large annual gains from Kalgoorlie Super Pit owners Northern Star Resources and Saracen Mineral Holdings.

Northern Star grew revenue by about $570 million in the past year to record $2 billion in FY20, while revenue at Saracen was up $519 million at nearly $1.1 billion.

Nickel and gold producer IGO and goldminer Regis Resources also reported gains, with both their revenues up $99 million.

The Data & Insights ranking previously included Atlas Iron, BCI Minerals and uranium miner Paladin Energy among others, which have fallen out of the top 20 during the past five years.

Fortescue Metals Group, Mineral Resources and Mount Gibson Iron were the only WA-based iron ore miners to make it into this year’s top 20, accounting for $22.7 billion in revenue. That represents 45 per cent of the combined top 20 revenue.

Most of this figure came from Andrew Forrest-chaired Fortescue, which lifted its revenue to $18.8 billion.

The company attributed its growth to record shipments of 178.2 million tonnes, together with a strong iron ore price that hit a high of $US128/t earlier this month.

By comparison, Wood Mackenzie previously forecast a price of around $US80/t for the second half of the calendar year, which senior research analyst Kim Christie said was one of the more bullish predictions made at the time.

The high price has been driven by ongoing supply constraints in Brazil, due to heavy rainfall earlier in the year followed by coronavirus impacts on operations, coupled with unexpectedly strong demand for the steel-making metal from its top consumer, China.

“Everyone’s been very surprised at how resilient the iron ore price has been through this year,” Ms Christie told Business News.

“China has thrown trillions of dollars at infrastructure projects, which has pushed steel demand quite substantially.

“We still think there’s going to be a slide in the iron ore price, but having said that, we don’t think it’s going to get anywhere near $80 a tonne. It’s likely to trade somewhere around the $90 to $100 mark.”

Similarly, Macquarie Group expects the iron ore price to average $US115/t for the remainder of the year before falling back to about $US99/t in 2021.

Investment banking company UBS, however, has predicted the price to slump to about $US85/t next year, suggesting Brazilian supply would recover faster than global steel production.

Ms Christie said China, which accounted for about 70 per cent of global iron ore imports, was rapidly moving forward with large construction projects, noting a ‘second city’ being built south of Beijing as just one example.

“There’s a lot of this that’s driving the steel demand, and therefore the iron ore demand,” she said.

“China’s always unpredictable … the economy is moving forward very quickly, based on these infrastructure projects, and we don’t know how long they will keep doing that.”

Large magnetite deposits are being developed in WA and South Australia, including Fortescue’s $US2.6 billion Iron Bridge project in the Pilbara.

The asset is set to deliver 22mt of high-grade, 67 per cent iron magnetite concentrate each year, with production planned for the first half of calendar 2022.

Fortescue could sell magnetite concentrate as a discrete product, Ms Christie said, or blend it with hematite ore produced from its other Pilbara operations, including the impending Eliwana mine, which could raise the company’s average product grade to above 60 per cent iron.

Eliwana is expected to produce 30mt of iron ore per annum from October this year.

Ms Christie said Fortescue, like other Australian iron ore miners, planned to increase its iron grade across the business.

“Australian ore is reliable and cheap, but is lower grade. We’re struggling to get that 62 per cent [iron] in our grades these days,” she said.

“That’s why I think some of these magnetite mines, particularly in South Australia, are getting a bit of attention.”

Ms Christie said although Chinese demand for Australian product had surged in 2020, importing nearly 760mt of iron ore between January and August, the high price had also created a rise in China’s domestic supply of between  1 per cent and 2 per cent.

She also said Australian exports would likely be lower in the coming months, with many mining companies carrying out most of their maintenance work following the end of the financial year.

Shipments have since risen to a rate of 818mtpa in August, matching April volumes.

That figure could rise further, with Fortescue recently receiving environmental approval to raise its iron ore exports through Port Hedland from a rate of 175mtpa to 210mtpa.

Fortescue will have the capacity to ship 188mtpa of hematite ore, as well as 22mtpa of magnetite concentrate sourced from Iron Bridge.

This approval came shortly after Macquarie predicted the miner would deliver 178mtpa in the current financial year.

Other exporters shipping through Port Hedland – the world’s largest bulk export port – have also flagged plans to raise throughput, with Melbourne-headquartered BHP expecting to ship 286mt in the current financial year, and Gina Rinehart’s Roy Hill between 55mt and 60mt.

Heavy rainfall earlier this year, followed by the onset of COVID-19 and subsequent mine closures, including one of Vale’s hubs in June, have further hampered the nation’s iron ore supply and boosted the commodity’s price.

Ms Christie expects mining to pick up, but said Vale would likely underperform.

“Our forecasts for Vale have always been around 350mtpa, but we doubt they’ll reach that. It’ll probably be closer to 300-320mtpa,” she said.

“But there are shipments coming through, and they will land in China this month and into next month, so that will ease some of the pressure on supply.”

Vale, whose Australian business is headquartered in Brisbane, recently projected it would meet the lower end of its production guidance for the calendar year of between 310mt and 330mt. Its previous guidance was 340mt-355mt.

Vale’s weekly shipments dropped to around 5mt in August, well below the weekly run-rate of 6.5mt-7mt needed to reach its revised guidance, according to UBS.

Meanwhile, WA iron ore exporters are faced with potential competition from new mines in Africa, in particular the 2.4 billion-tonne Simandou deposit in Guinea, which holds some of the world’s largest iron ore reserves with grades of 66 per cent to 67 per cent.

Consortium SMB Winning, which controls blocks one and two of Simandou, is pushing for an operational start in 2026, Ms Christie said.

That would require between $8 billion and $10 billion spent on infrastructure, including a 650-kilometre railway line.

Rio Tinto and Chinese aluminium giant Chinalco, which hold blocks three and four of the Simandou deposit, would likely share the infrastructure costs with SMB, should they proceed with development of their blocks, Ms Christie said.

“Steel mills are more productive on higher-grade ore,” she said.

“If [China] can get that at a reasonable price, it’s going to assist their mills from an environmental point of view.”

Last year, WA accounted for 65 per cent of the iron ore imported by China, according to the Department of Jobs, Tourism, Science and Innovation.

More than $17 billion worth of major iron ore projects are under construction or committed in WA, including Rio Tinto’s Koodaideri mine, which is expected to start producing in early 2022.

The London-based miner also has sustaining projects at its Robe River and Greater Tom Price operations.

Meanwhile, BHP says it has entered the final development stages for its 85 per cent-owned South Flank project, which is set to become the largest iron ore processing facility in the state.

The asset will replace BHP’s Yandi operations in the Pilbara, and is expected to deliver 80mtpa.

Fortescue’s Eliwana mine – expected to cost between $US1.325 billion and $US1.375 billion – is the closest to production, scheduled for later in the year.

The state’s third largest iron ore miner – and fourth largest producer in the world behind Vale, Rio Tinto and BHP – Fortescue has had an active year, moving forward with its new developments while also successfully operating its existing assets.

Those include the Christmas Creek and Cloudbreak iron ore mines, within the Chichester hub.

Fortescue also achieved the number one ranking in the S&P/ASX 100 Index for total shareholder returns over the three years to June 2020 of 266 per cent.

The company declared $US3.7 billion in dividends in August, representing about 77 per cent of its full-year net profit of $US4.7 billion.

And although chief executive Elizabeth Gaines says delivering enhanced returns is a key priority for the business, Fortescue’s dividends have been volatile over the years.

However, as a pure-play iron ore stock, relative to competitors BHP and Rio, Fortescue has achieved rapid growth.

Fortescue has also bolstered its sustainability efforts in recent years, with a plan to achieve net zero emissions by 2040.

Ms Gaines said that goal, among other targets, positioned Fortescue as a world leader in addressing climate change.

“Our success will be founded on practical initiatives that will allow us to deliver on our targets in an economically sustainable manner,” she said in June.

“Mining is one of the most innovative industries in the world and Fortescue is harnessing this technology and capability to achieve carbon neutrality with a sense of urgency.”

The company has $US700 million worth of transmission and power generation projects in place, aimed at powering its iron ore operations with renewable energy.

That includes a $US450 million, 150-megawatt solar photovoltaic facility to provide low-cost power to its Iron Bridge magnetite project.

Fortescue is hopeful of becoming the first Australian iron ore producer to successfully operate a magnetite mine, which Ms Christie said had historically been unsuccessful commercially.

“We’re only 18 months away from Fortescue getting iron ore on a train and out from Iron Bridge,” she said.

“They say they’re on track, but time will tell.

“If anyone’s going to do it, Fortescue will do it.”