If you’re wondering why the outlook for iron ore remains grim despite last night’s price rise to a three-month high of $US63.10 a tonne, it is partly because Western Australia’s iron ore miners have a new competitor – themselves. 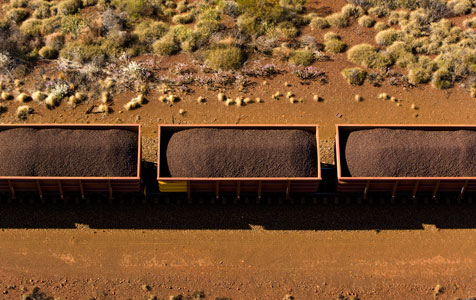 If you’re wondering why the outlook for iron ore remains grim despite last night’s price rise to a three-month high of $US63.10 a tonne, it is partly because Western Australia’s iron ore miners have a new competitor – themselves.

That sounds odd, but not when you consider that one of the fastest growing sources of feedstock to make steel in China is scrap, and much of the steel scrap being collected and recycled today started as WA iron ore.

Until recently, scrap represented about 10 per cent of the raw material used by Chinese steel mills; a remarkably low ratio given that around 60 per cent of the steel made elsewhere in the world is made from recycled scrap.

There are obvious reasons for China having such a low scrap ratio, including the fact that it has been in a building phase and it takes around 20 years for steel to reappear as scrap.

After almost 20 years of hectic growth, including periods when the Chinese economy expanded at more 10 per cent a year, the scrap era is starting, with steel recycling centres popping up around the country.

One bank’s view of the world is not necessarily an accurate guide to the future, and last night’s iron ore price rise has bolstered investor confidence that conditions might not turn out to be as bad as feared.

But what Citi has done in its fourth annual global iron ore book is paint a picture of an unrelenting slowdown in demand, accompanied by a deluge of supply it expects to crush the iron ore price back down to $US40/t over the three years from 2016 to 2018.

“For the iron ore market the next decade is shaping up to be a complete reversal of the past decade,” Citi said.

For Australian iron ore producers, and that essentially means WA, it will be a case of ‘the big get bigger and the small get smaller, and fewer’.

Currently in the process of an attempted revival, Atlas Iron is one of the locals handed a sobering diagnosis by Citi, which involved a likely restart and another closure.

“Despite a significant debt burden, it (Atlas) is likely to re-start in the near future. However, because the break-even (cost) is around $US50/t, we expected closure again given our $US40/t price forecast,” Citi said.

Other key elements in Citi’s analysis of the iron ore market include:

• an overall decline in global demand for iron ore of more than 60mt between 2018 and 2025 (i.e the end of growth) thanks to China’s slower growth and rising scrap availability;

• falling costs in the iron ore industry, which will keep higher-cost mines in production for longer; and

• cheap expansion projects whereby the world’s lowest cost mines, including Rio Tinto and BHP Billiton, will boost output while still remaining at the bottom of the cost curve.

Citi took a knife to the project development pipeline, carving it into three pieces with the biggest and lowest cost operations, including those of BHP Billiton, Rio Tinto and Gina Rinehart’s Hancock Prospecting, likely to proceed.

The second category of brownfield projects (expansion of existing mines) would include deferrals and delays, such as Baosteel’s West Pilbara development.

The third category comprised a long list of cancelled projects, many proposed by small companies in West Africa and Australia that “have become unviable”.

“Comparing the project pipeline today versus that of a year ago, more than half of projected tonnage has seen its scope reduced or start-up date pushed back,” Citi said.

However the more important part of the bank’s analysis is that iron ore is rapidly contracting into fewer, bigger, mines, a point best illustrated by the observation that: “At the extreme, 18 per cent of projected tonnage has been cancelled entirely. Only 42 per cent remains on track, concentrated in eight projects, six of which are owned by the majors.”

With China entering a long-term period of change, the best hope for iron ore miners is rising demand for steel in other countries and regions, particularly a group Citi called “the emerging five” – India, South-East Asia, the Middle East, Africa and Latin America.

“Of these, India shows the most promise,” the bank said.

But before the ‘emerging five’ can have an effect on the iron ore market, China’s declining demand for steel and the rise of an alternative source of raw material supply in the form of scarp will dictate the trend.

That means the immediate outlook is for an iron ore price of $US40/t before settling at a long-term $US55/t which, interestingly, is the long-term iron ore price for the 115 years from the year 1900 when expressed in 2014 U.S. dollars.

That’s what you call a really long-term trend.