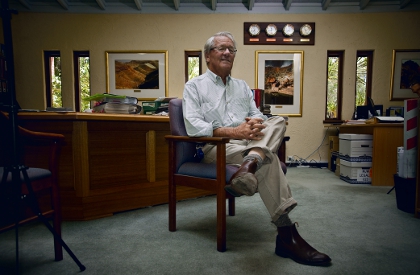 Iron ore heir and Voyager Estate owner Michael Wright has died at the age of 74.

Mr Wright, along with his sister Angela Bennett, had a combined wealth estimated to be in the billions due to the work of their father, Peter Wright, partner to Lang Hancock, who was instrumental in the early development of WA’s iron ore industry.

It is believed Mr Wright had been ill for some time.

Last year, in an extensive interview with WA Business News, he outlined the extent of his succession plans, expressing his desire to ensure that his family were not mired in the legal battles that had frustrated him.

Some time ago he and his sister settled a long-running legal dispute with the children of their brother Julian, who claimed they were owed more from Peter Wright’s estate despite their father’s decision to sell his interests to his siblings some decades ago.

More recently, Mr Wright and Mrs Bennett were locked in a legal battle with Mr Hancock’s daughter Gina Rinehart over ownership of a 25 per cent stake in the Rhodes Ridge iron ore deposit, which is 50 per cent held by Rio Tinto.

“I would like to get rid of these legal issues,” Mr Wright said last year.

“Why at my time of life do I have to deal with the bloody things that have been going on since 2000? I don’t know.

“They are fatiguing and frustrating and, if I want to feel sorry for myself, I could say they are demonstrably unfair, but there is no point thinking like that, you are stuck with them and you have to deal with them.”

Mr Wright, who did not drink, bought Voyager Estate in 1991 and developed the vineyard and cellar door into an extensive business. He also had significant property interests in the US, notably Las Vegas.

In discussing his succession plans last year, Mr Wright said after significant planning and consideration, both his daughters had decided to become directly involved in the family business, while his son had opted to stay out of it and concentrate on a career in theatre sector.

A link to last year's story is available here for subscribers: http://www.wabusinessnews.com.au/article/Timing-vital-to-making-the-Wright-move