Export revenue has become increasingly concentrated on iron ore but WA has still benefitted, while moves to net zero now dominate thinking. Click for the list of WA's biggest exporters. 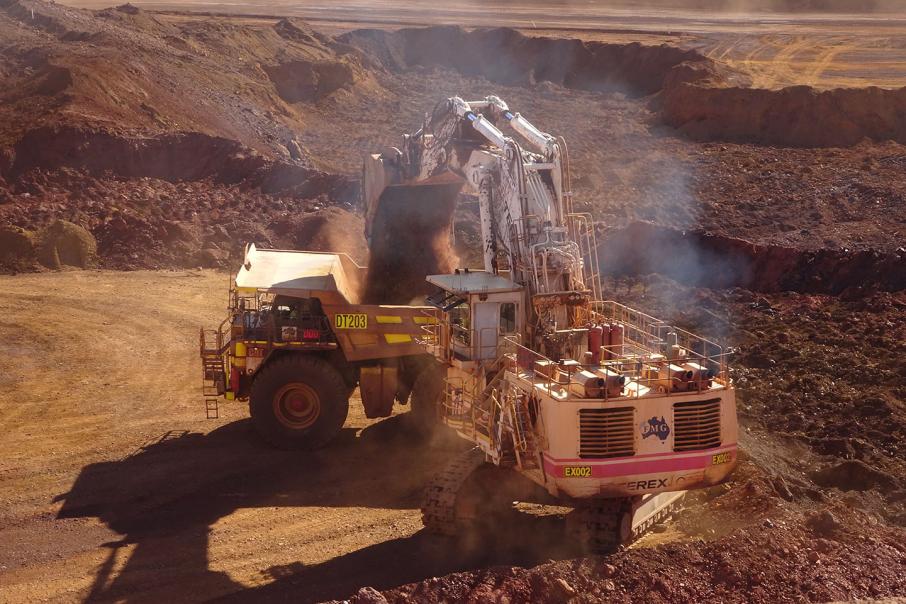 There's a popular sentiment in business and political circles that Western Australia should diversify its export industries.

Manufacturing iron ore wagons in Midland, or pumping out green hydrogen from the Mid West, were among the ideas proposed in the state election in March.

Some smaller businesses and industries pitch for support for the same purpose.

But this year’s Business News Data & Insights Biggest Exporters list provides an insight into why diversification is a complicated issue.

The top 10 exporters on the Data & Insights list are shipping at a rate of $180 billion annually, although that data comes from varying time periods and is calculated at a 100 per cent, operating basis, rather than on equity share.

Data from the Australian Bureau of Statistics shows a similar story: in calendar 2020, the iron ore trade was worth $115 billion, about 62 per cent of the state’s merchandise exports.

As a rough guide, just more than $1 of every $3 of production in WA in the year was from the iron ore industry.

Only two years earlier, however, iron ore shipments of $63 billion were 43 per cent of merchandise exports.

That shows a dramatic concentration of iron ore as the state’s most significant export.

But while the data indicates exports became less diversified over the time, it was a phenomenal period for WA’s economy and living standards, with a headline-grabbing $5.6 billion operating surplus in the 2021 financial year for the state government.

More than $400 billion was invested in the state’s mining industry in the past two decades, unlocking the iron ore deposits and increasing capacity.

Iron ore production rose from less than 200 million tonnes annually at the turn of the century to surpass 800mtpa.

The investment helped large miners such as Rio remain among the lowest-cost producers globally, with the company’s most recent half yearly results showing a cash cost before royalties, freight and capital charges of about $US18 per tonne.

Whether similar investment could be achieved across other industries will depend on several factors.

One of those is corporate tax, which affects the rate of return for capital spent on a project.

Since the Henry tax review recommended a reduction of the rate from 30 per cent to 25 per cent for all businesses in 2010, the proposal has resurfaced frequently.

In July, the Tax Institute called for a cut in the rate to 25 per cent, saying the country’s headline tax rate was fourth highest in the developed world.

Research by the Australian National University released earlier this year indicated that high concentration of resources in the country’s economy may partly reflect the uncompetitive corporate tax rate.

It said data suggested a one percentage point rise in the company tax rate would cut foreign direct investment by 3.3 per cent.

Australia had continued to attract foreign investment, even as the company tax rate became less competitive globally but it had mostly flowed into mining and financial services, the authors said.

Business investment outside of resources had been declining as a portion of the economy for decades, the ANU report said,

The suggestion is that Australia attracts mining investment because that sector is highly competitive and has a strong natural resource endowment, but broader economic settings hold back other industries. 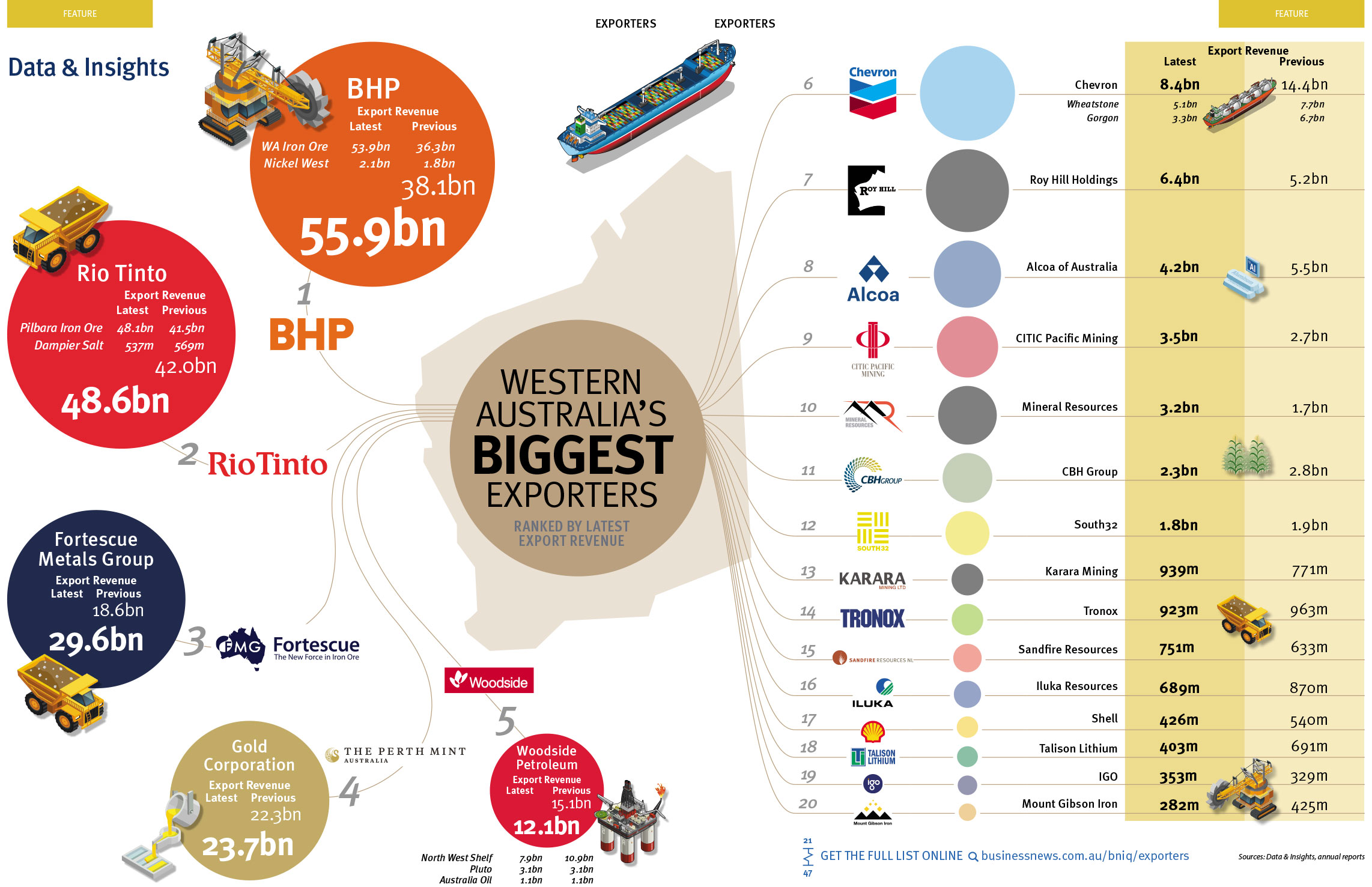 NB: For example, all of the export revenue from Pluto and North West Shelf Venture is listed under operator Woodside.

The federal government’s decision to pledge a net zero by 2050 target for carbon emissions might ordinarily be expected to affect the state’s big exporters, which are also big emitters.

They were already on the move, however.

Woodside Petroleum announced a $1billion-plus ammonia and liquid hydrogen plant to be built near Rockingham in late October, adding to partnerships in South Korea and Japan to develop hydrogen markets.

The ASX-listed energy business had already set an aspirational goal of reaching net zero by 2050, with a 30 per cent cut on its 2016-20 emissions average by 2030.

Fortescue Metals Group announced a series of hydrogen projects on the east coast, including an electrolyser plant to be built in Queensland.

Electrolysers use electricity to split water into hydrogen and oxygen.

The company has an even deeper emissions target - net zero for scope-three emissions by 2040.

That means the customers using its products will need to ensure no net carbon emissions from their production of steel or other materials.

Rio Tinto promised to cut its scope-one and -two emissions, which include emissions at its operations and through its electricity use, by 50 per cent by 2030 from a 2018 baseline.

Some of the cash would go towards one gigawatt of wind and solar power being deployed in the Pilbara and electrification of its trucks and rail operations through the region.

“Can you blame them? It’s no conspiracy, mate. They’re just fund managers trying to make a dollar for their own punters.

“They’ve made a rational economic judgement that those countries with a COP26 carbon neutral commitment are much better investments than those without it.

“As an economic rationalist, I can see their logic.

“But so does half the world’s investible capital, controlling $120 trillion worth of assets.

“They have committed to not finance companies and governments – like ours – without a 2050 carbon neutrality target.”

Treasurer Josh Frydenberg made a similar point speaking to the Australian Industry Group in late September.

Foreign investment stood at $4 trillion, half of the federal government’s bonds were foreign owned, and 20 per cent of banking funding was sourced offshore, he said.

“Reduced access to these capital markets would increase borrowing costs, impacting everything from interest rates on home loans and small business loans, to the financial viability of large‑scale infrastructure projects,” Mr Frydenberg said.

“Australia has a lot at stake.

“We cannot run the risk that markets falsely assume we are not transitioning in line with the rest of the world.

“Were we to find ourselves in that position, it would increase the cost of capital and reduce its availability, be it debt or equity.”

All of that suggests a multi-billion-dollar pipeline of investment coming into the state to reduce emissions.

The federal government claims a net zero by 2050 policy will lead to national income about $2,000 higher per person in 2050 than under a no policy change scenario.

Nonetheless, there are challenges.

Unlike natural gas, where economic reserves are necessary for a country to become a producer, renewable hydrogen production can take place in many locations.

It will be a competitive market.

Similarly, investment programs to electrify the Pilbara will be competing for resources and workers with other industries in the state.

“In the (stated policies scenario) … demand growth in China, India and elsewhere in South-East Asia continues to support prices in those regions through to 2050, giving signals for incremental export capacity growth to established producing regions such as Australia and the Middle East as well as to emerging exporters in East Africa,” the report said.