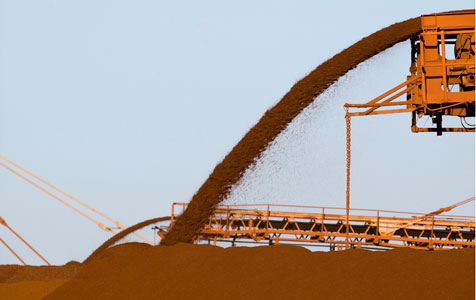 The $10 billion tragedy of Western Australia’s failed magnetite iron ore processing experiment risks becoming something worse next year, as the price is pushed down by a flood of iron ore supply and a slowdown in demand from the Chinese steel industry.

A series of recent events point to an emerging crisis for high-cost miners of both types of iron ore – the direct shipping material preferred by most producers, and heavily-processed magnetite preferred by some Chinese steel mills.

The first hint that something serious is brewing in iron ore came with the appointment last week of former Leighton Holdings chief executive Wal King as a special adviser to the deeply troubled Sino Iron magnetite project in the Pilbara.

One man will not fix what’s wrong with the design, engineering and operational stability of the $7 billion Sino Iron project, but Mr King could be the man to recommend a major rebuild or total shutdown to avoid even heavier future losses for the project’s owner, Citic Pacific.

There was a second unwelcome surprise yesterday when Gindalbie Metals revealed more operational problems at its $3 billion Karara project, which will involve a three-month fix-it program and a call for more money from the project’s major shareholder, China’s Ansteel group.

Played down by management as a tailings dewatering issue, the reality is that design and engineering problems have plagued both Karara and Sino since they were built. Neither has performed as promised and neither can say when it will operate successfully, let alone profitably.

The third magnetite project proposed for WA – the Southdown mine near Albany – was abandoned partly because of the failure of the first two, and partly because its dominant Chinese shareholder could see a flood of surplus iron ore heading for the world market sometime in the next few years.

The flood, according to several recent studies is arriving, aided by huge iron ore expansion programs being undertaken by the world’s biggest miners keen to secure a grip on their market share before the supply surplus collapses prices.

Rio Tinto, the biggest of WA’s iron ore producers, added to the surplus this week when it loaded the first bulk carrier at its new Cape Lambert B wharf.

The sailing of the Tai Shan for Japan signals the effective completion of Rio Tinto’s ‘290’ project, which lifts annual capacity at its Pilbara operations to 290 million tonnes a year.

Next step for Rio Tinto is its ‘360’ project, which is when annual output rises to 360mtpa and, more importantly, the total cost of producing each tonne drops from its current $US50 to around $US35.

By pushing ahead with the expansion of its WA iron ore business, and by keeping rivals guessing as to when it will go to 360mtpa, Rio Tinto is stamping its authority on the industry as only the biggest and lowest-cost producer can do as the global supply of iron ore moves into a period of significant oversupply and falling prices.

The effect of the market-protecting expansion projects will be felt most severely by high-cost small producers, new entrants into the industry such as Gina Rinehart’s Roy Hill project, and the magnetite producers, which should be able to earn a price-premium when in production but will need it because their costs will be rising with every delay and every new capital injection.

All that’s needed now to complete this picture of an industry entering a highly competitive period of oversupply is a measure of the surplus; and that too was being circulated this week by concerned investment banks – perhaps with information provided by Rio Tinto during briefings associated with the 290 project because it will be keen to squash its smaller rivals.

According to the Swiss bank, UBS, the global iron ore surplus next year will be around 100mt. Goldman Sachs goes even higher, suggesting a 200mt surplus in 2015.

The price of iron ore, like any other commodity, will fall as the surplus rises. UBS forecasts $US100/t from later this year, a substantial fall from the current $US138/t, but not enough to force any Australian producer out of business.

The local cutbacks could come if the price dips to UBS’s long-term forecast of $US72/t, a level at which Rio Tinto and other big miners such as BHP Billiton, can remain handsomely profitable, but which will hurt high-cost producers.