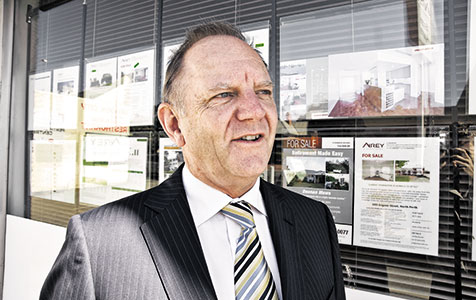 Prospects for significant capital growth over the next couple of years in Perth’s residential real estate market are slim, according to leading industry players, with the median home value forecast to remain between $540,000 and $550,000.

The latest data on Perth home values has painted a picture of a steady market, with the Real Estate Institute of WA reporting the metropolitan median house price remained at $540,000 for the past two months.

Sales turnover, according to REIWA, was down 25 per cent during the past three months, compared with the previous quarter.

Analysis from national property research firm RP Data was similar, with the agency putting Perth’s median house price at $512,000, just 1 per cent higher than the figure three months ago.

Tgis has been driven largely by the state government’s incentive changes making it much more attractive to build.

Mr Airey said that, before the incentive changes, which slashed the first home buyers grant for established homes from $7,000 to $3,000, seven out of 10 first-time buyers were buying existing homes.

“With that change in demographic there are less people trading up because their homes are not selling to first home buyers,” Mr Airey told Business News.

“They’re a big driver of sales and I think they will be steady around 20 per cent of the market, but of those 20 per cent, half of them will be buying a new home and that will really affect the established home sales.”

Mr Airey said he expected sales turnover to bounce back over the next few months – the traditional spring rebound – but acknowledged prospects for capital growth over the coming year were not good.

“Bearing in mind, though, we’re moving into the best two quarters for sales, so we’ll probably see more growth in this next six months than we will in the subsequent six months.”

The Bourkes managing director said the market was “absolutely flat” in relation to capital gains.

“It’s going to be a steady as she goes sort of market, probably for the next couple of years,” Mr Bourke said.

“We won’t see any great shocks to the market, whether that be up or down.

“There is also no real speculation, there is no-one flipping or tarting up homes and getting in and out very quickly.

“It’s really getting back to what the raw market is, and what it should be.”

He said those prospects, or more accurately the lack of prospects, had left investors to consider alternatives to residential real estate.

He estimated more than 90 per cent of Bourkes’ sales were to owner-occupiers, while investors made up just 9 per cent of transactions in the broader Perth market.

“It’s a very tricky question for an investor as to where you put your money,” Mr Bourke said.

“Do you leave it as cash, where you are getting two or 2.5 per cent, which is a pretty meagre return, the share market is strong, but how long will that go, and property, well, there is no capital gain.”

According to REIWA research, the median weekly rent in Perth of $450 at the end of June this year was 5.3 per cent lower than the same time last year.

“Some investors that got in six months ago were probably quoted figures they haven’t been able to achieve,” Mr Bourke said.

“I guess that’s the quandary, and that’s why cash at the bank is at its highest level for 30 years.

“People move to cash in uncertain times of investing, and just leave it where it is until a clear path is available.”

Realmark managing director John Percudani joined those warning that capital growth would be slim. But he said the market was made up of diverse segments, some of which were performing better than others.

However, Mr Percudani said his agency was experiencing an increase of activity from investors.

“Because the first home buyers are now out of the way, so to speak, the investors have a better chance of participation, so their participation level has increased.

“That’s a positive sign of maintaining that market, rather than the market falling away.”