Falling private sector investment in heavy industry and electricity generation were major contributors to a big drop-off in total construction and engineering work in Western Australia in June, down 21.7 per cent quarter on quarter to $6.75 billion. 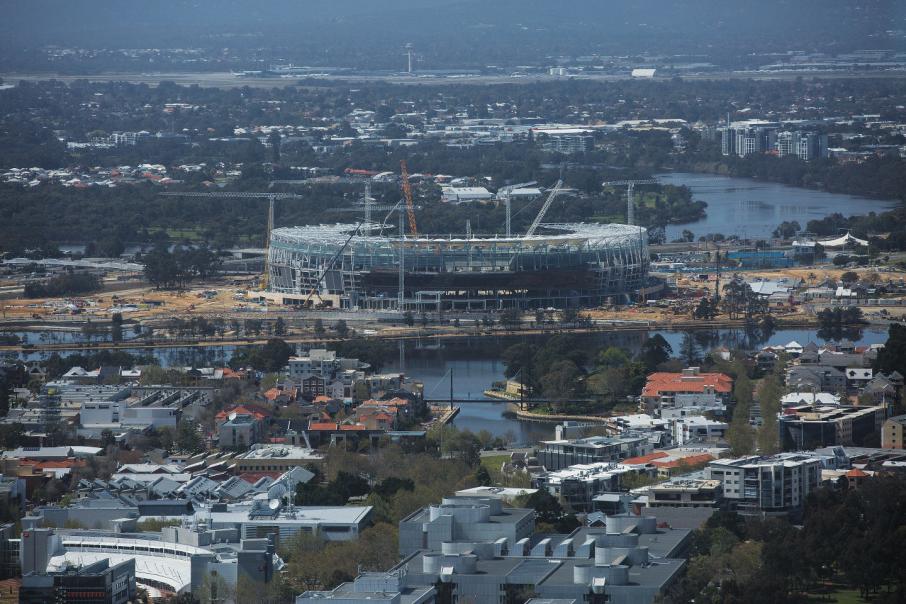 The government-funded Perth Stadium is one of the state’s largest current construction projects Photo: Attila Csaszar

Falling private sector investment in heavy industry and electricity generation were major contributors to a big drop-off in total construction and engineering work in Western Australia in June, down 21.7 per cent quarter on quarter to $6.75 billion.

That brought total engineering and construction spending to $36.1 billion for the year to June, down from $40.9 billion in 2014-15, according to the Australian Bureau of Statistics.

June quarter spending was well down on the same period in 2015, when it came in at $12.5 billion.

While high levels of public spending ameliorated the impact to an extent, the drop in private investment outweighed this effect.

This result in Western Australia has similarities to the June quarter national GDP figures, which found the majority of growth in that period had been driven by government spending.

Construction spending data is key in this regard, with the sector one of the state’s largest employers. During the recent mining boom, it was a key component of rising business investment and WA’s economic growth.

The most significant drop was in private sector heavy industry construction spending, which was down 28.5 per cent in June to $4.97 billion, according to the ABS.

Electricity utilities and generation capacity expenditure fell 13.7 per cent to $168 million, a number that pales in comparison to the $1.9 billion spent in that sector in June quarter last year.

Public spending trended in the opposite direction.

In electricity generation and utilities, public construction spending lifted 31.8 per cent to $281 million, while in recreation it was 30.3 per cent higher to $96.9 million.

A key piece of data in this sector was for rail work contracted yet uncompleted, which came in at $1.3 billion – nearly nine times the level in March.

That increase coincides with the awarding of the Forrestfield Airport Rail contract in April.