Click through to read Business News's annual list of WA's 20 biggest exporters, with data on companies such as Chevron, Roy Hill, Gold Corporation and Glencore. 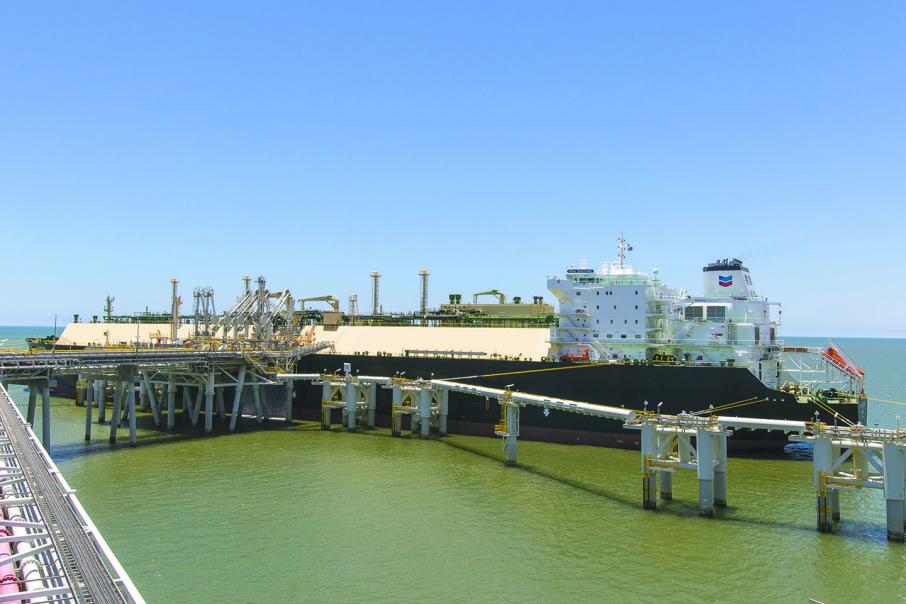 Chevron is a big exporter of LNG from WA. Photo: Chevron

As big projects have entered production, numbers on Business News’ annual biggest exporters list have lifted, with the top 10 companies shipping at a rate of $136 billion annually.

US-based energy giant Chevron has finally cemented its position as a long-term powerhouse of Western Australia’s economy, according to the latest Business News biggest exporters list.

Chevron dramatically lifted annual exports from WA operations, by more than $10 billion on this time last year, to $14.8 billion.

It now ranks fifth, up one position from the 2018 list. 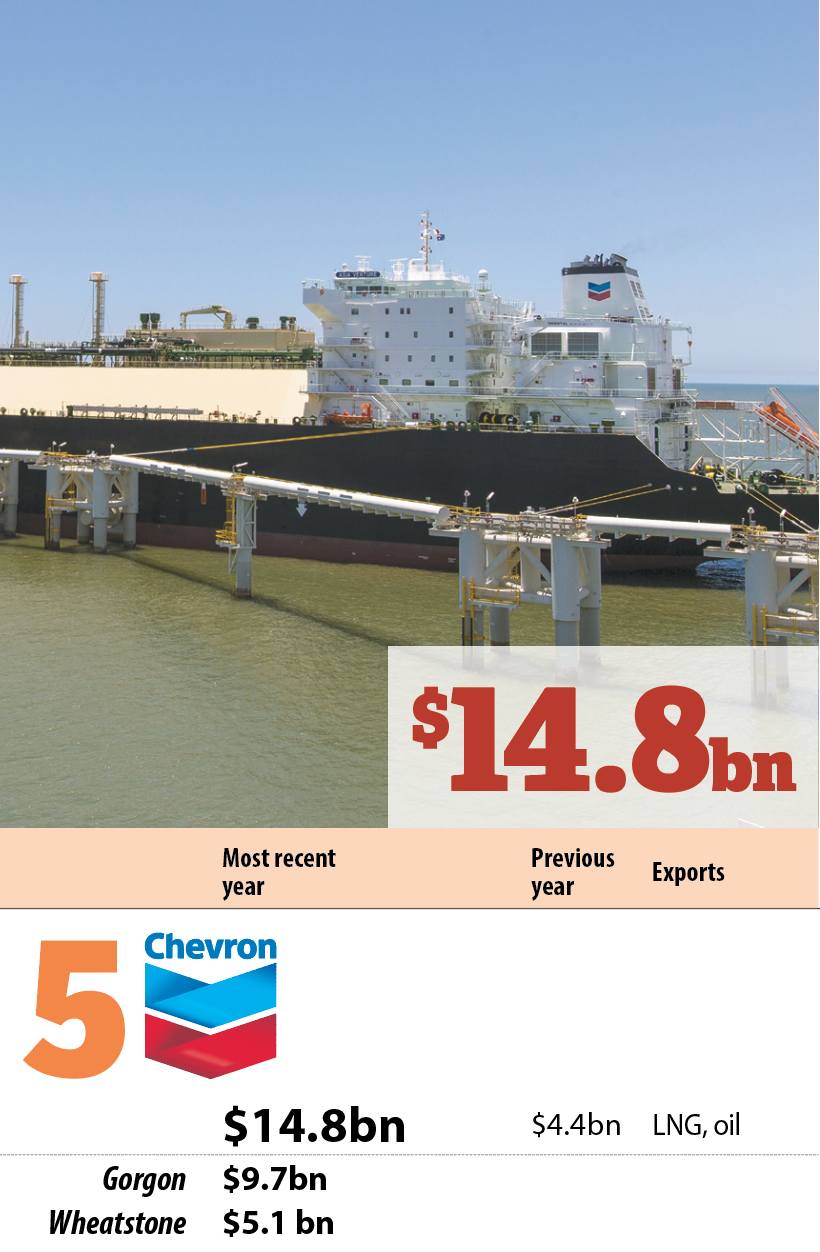 Businesses are ranked by export revenue from their operations, rather than their equity share from facilities.

That means Chevron’s number comprises shipments from its Gorgon and Wheatstone operations, but not the North West Shelf Venture.

The estimate is calculated using data from Chevron’s most recent annual report, for the year to December 2018, and from Woodside Petroleum, as the two companies partner on both North West Shelf and Wheatstone.

Chevron’s ascension on the Business News list has been a lengthy process.

The final investment decision for the 15.6 million tonne per annum Gorgon LNG plant on Barrow Island was made in September 2009, with first gas produced at train one in March 2016.

Production at the third LNG train began a year later.

The 8.9mtpa Wheatstone plant was given the green light in September 2011, with first gas in October 2017, and production from the second train in June 2018.

Business News estimates revenue from the Gorgon plant was $9.7 billion, while Wheatstone revenue was $5.1 billion. 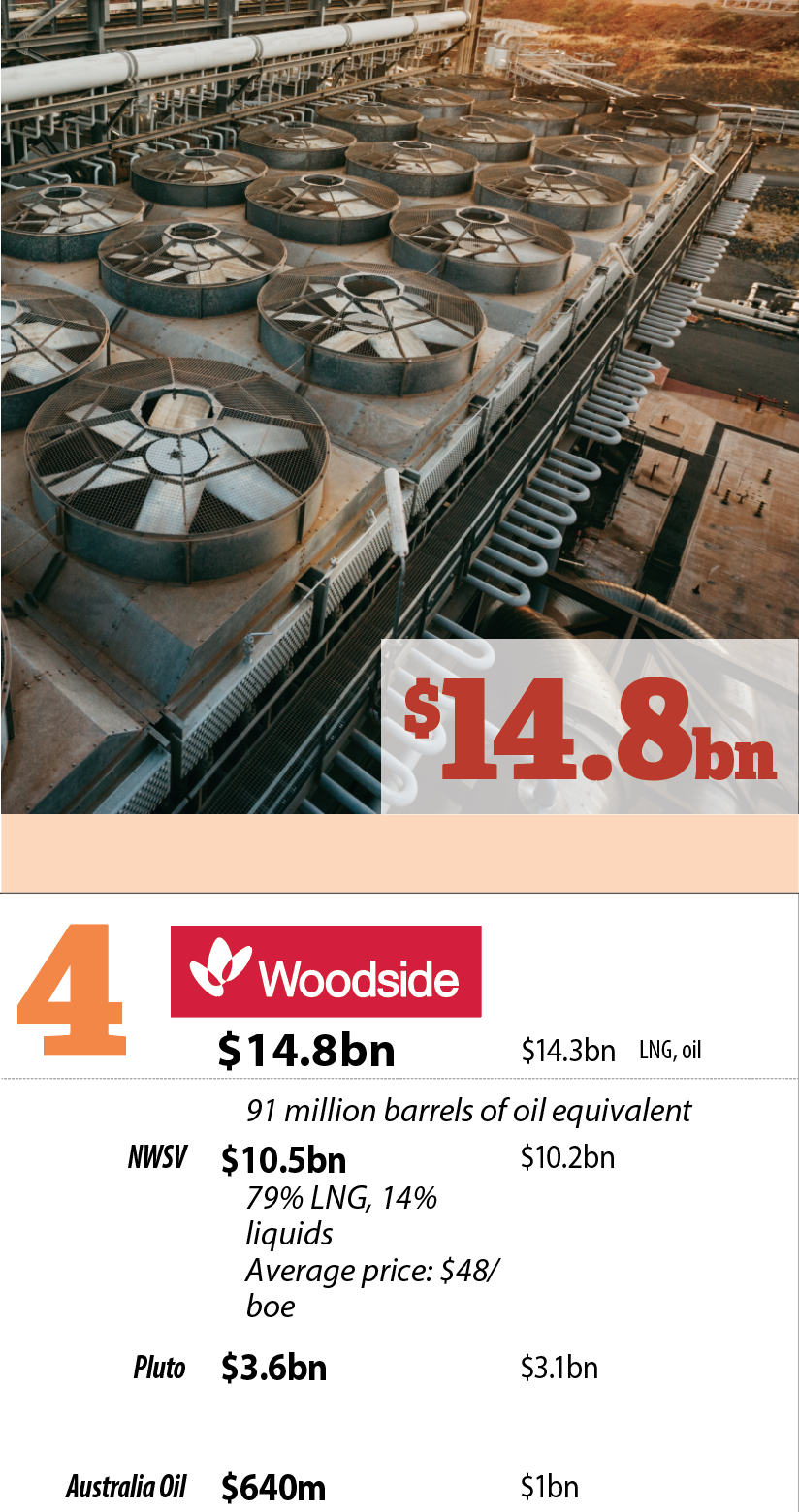 Woodside maintains fourth position on the list, with revenue up from $14.3 billion to $14.8 billion.

The company’s three WA operations are the North West Shelf Venture, where export revenue is estimated to be $10.5 billion, Pluto LNG ($3.6 billion), and Australia Oil ($640 million).

Business News made adjustments to remove domestic gas sales, which we valued at about 8 per cent of project revenue, and assumes contract pricing is similar across all stakeholders.

Shell does not yet feature on the list because shipments from the Prelude LNG vessel only started in the middle of this year. If the facility were operating at full capacity, however, the company would rank about 11th. 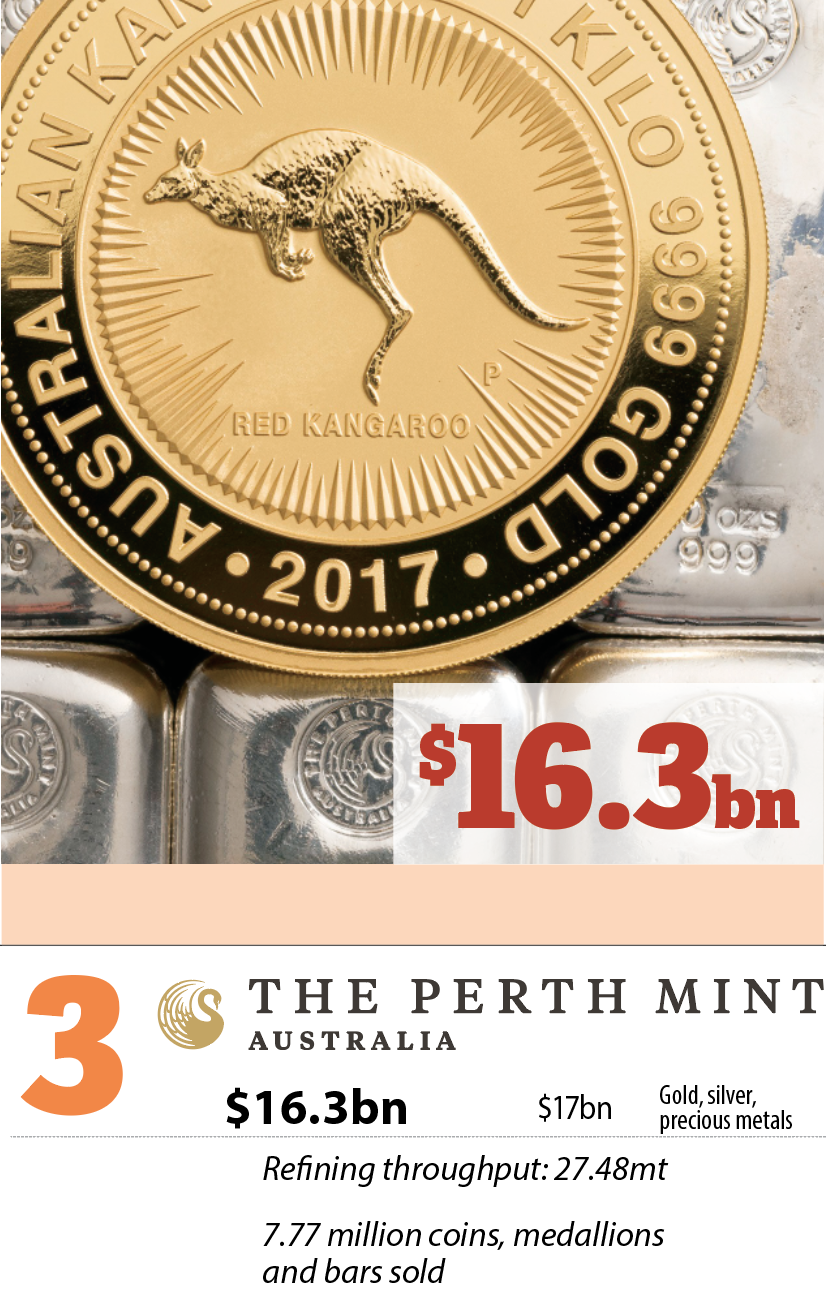 The eight iron ore miners on the list have benefited from strong prices since a Brazilian tailings dam collapsed in January.

The price reached highs of more than $US120 per tonne in July, around 70 per cent above where it started the year.

Notably, businesses on the list report on different time periods, while exchange rate or price volatility can create big movements in the figures that lead or lag for particular companies.

For example a 10 per cent rise in the iron ore price would lift export revenue across the state’s economy by about $6 billion. 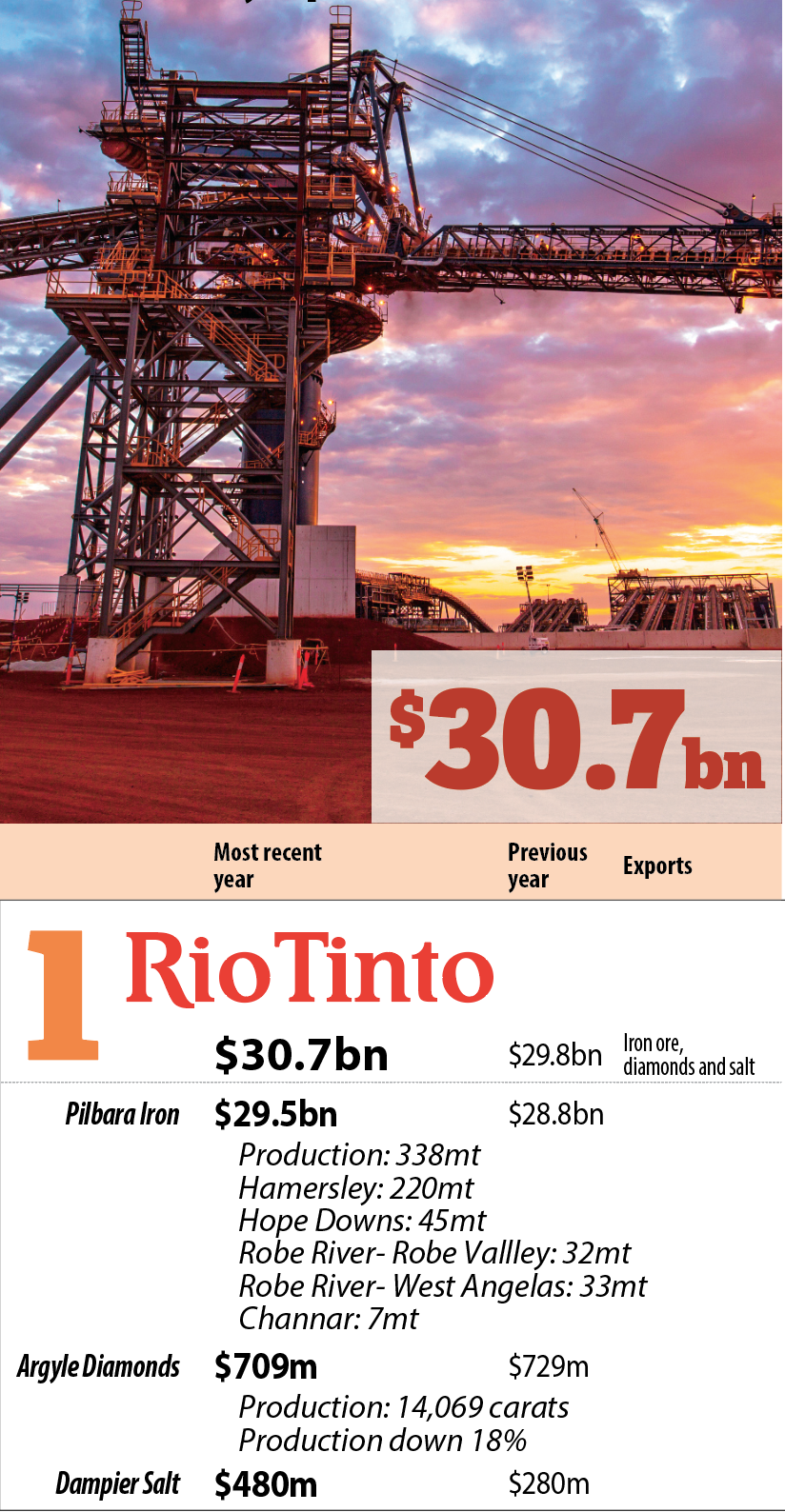 The top exporter on the Business News list was Rio Tinto, which produced 338mt of iron ore at its Pilbara iron ore operations with a value of about $29.5 billion.

Rio reports on a calendar year basis, so those numbers will not include this year’s price surge.

The total production figure across the company’s 16 Pilbara mines was only 2 per cent up on the previous period.

Rio also operates Dampier Salt and Argyle Diamonds, which have a combined revenue of about $1.2 billion. 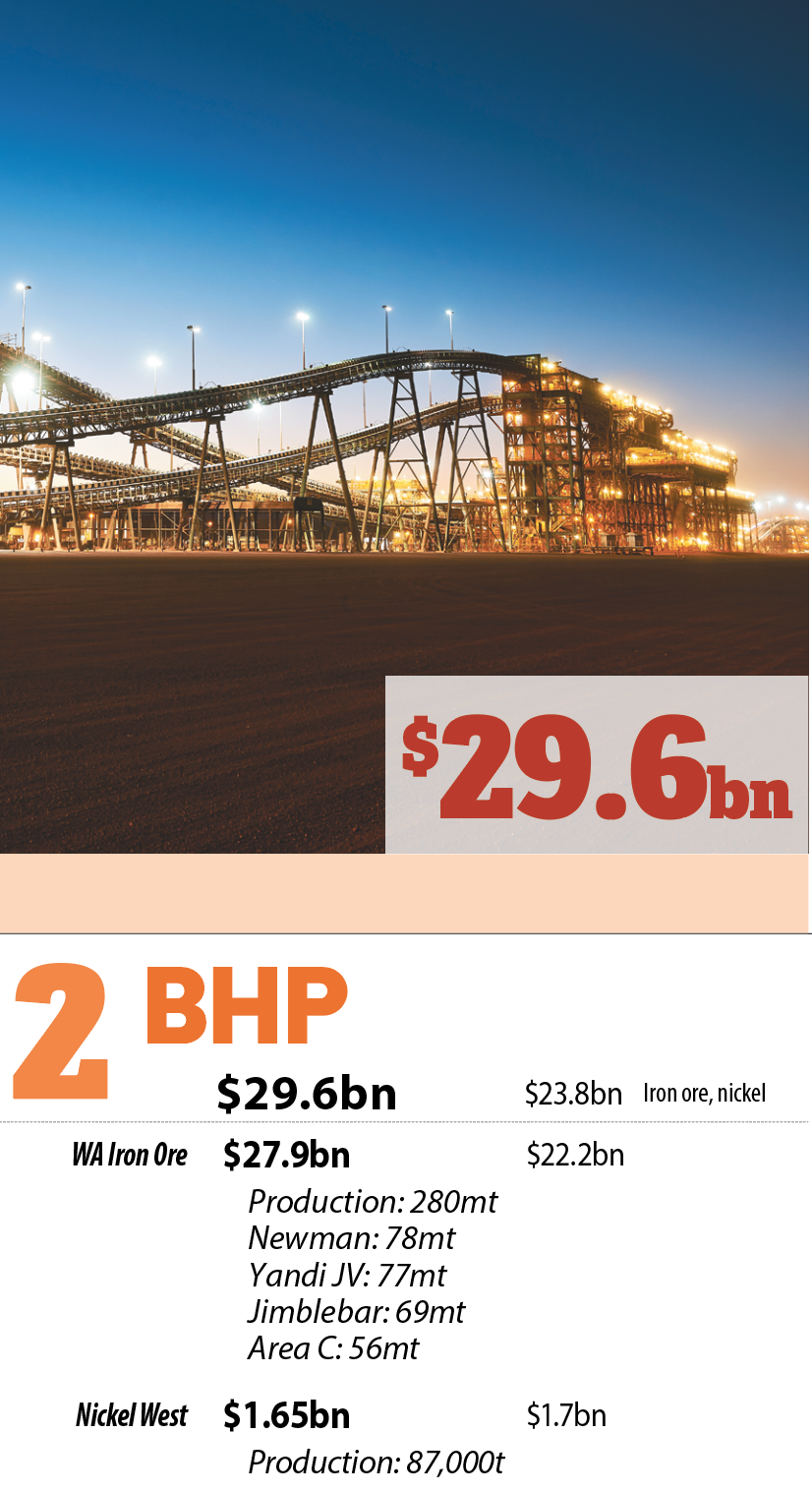 BHP remained in second position, with exports of $29.6 billion, about $27.9 billion of which came from the WA Iron Ore division.

Iron ore was up from $22.2 billion last year thanks to the higher iron ore sale price, which appreciated 16 per cent to average $US80/t, and an exchange rate fall of about 6 cents to US75 cents.

Sales at BHP’s Nickel West operation fell 3 per cent to $1.65 billion after a fire at the Kalgoorlie smelter in September 2018 reduced output.

Three other iron ore exporters were in the top 10. 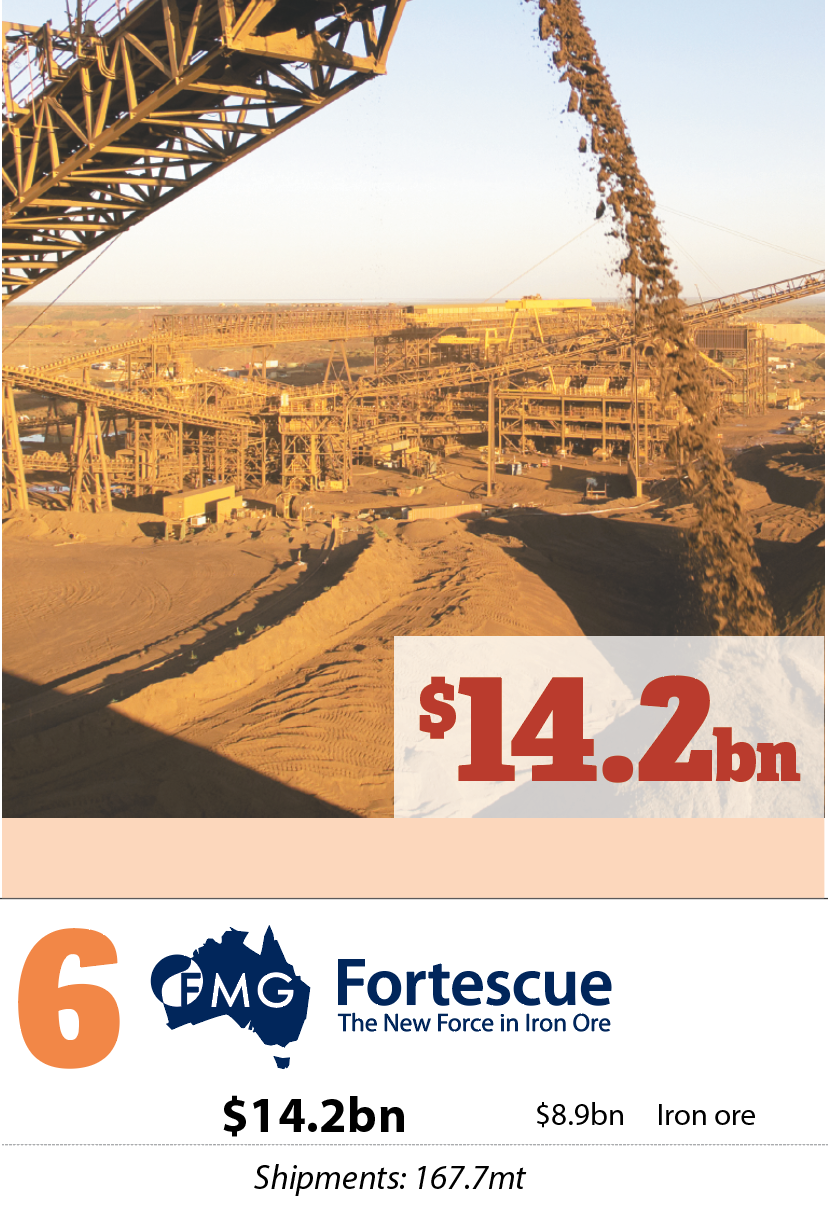 Citic Pacific (10th) revenue was $2.4 billion, according to its latest annual report.

These figures combine to deliver a significant economic impact for the WA economy, as highlighted in recent research by EY funded by Fortescue.

“Australia’s resource sector is the powerhouse of our economy, and at 3 per cent of GDP the iron ore sector directly contributes 68 cents to the economy per dollar of output with a further 17 cents per dollar indirectly flowing through strong linkages to other industries,” FMG chief executive Elizabeth Gaines said. 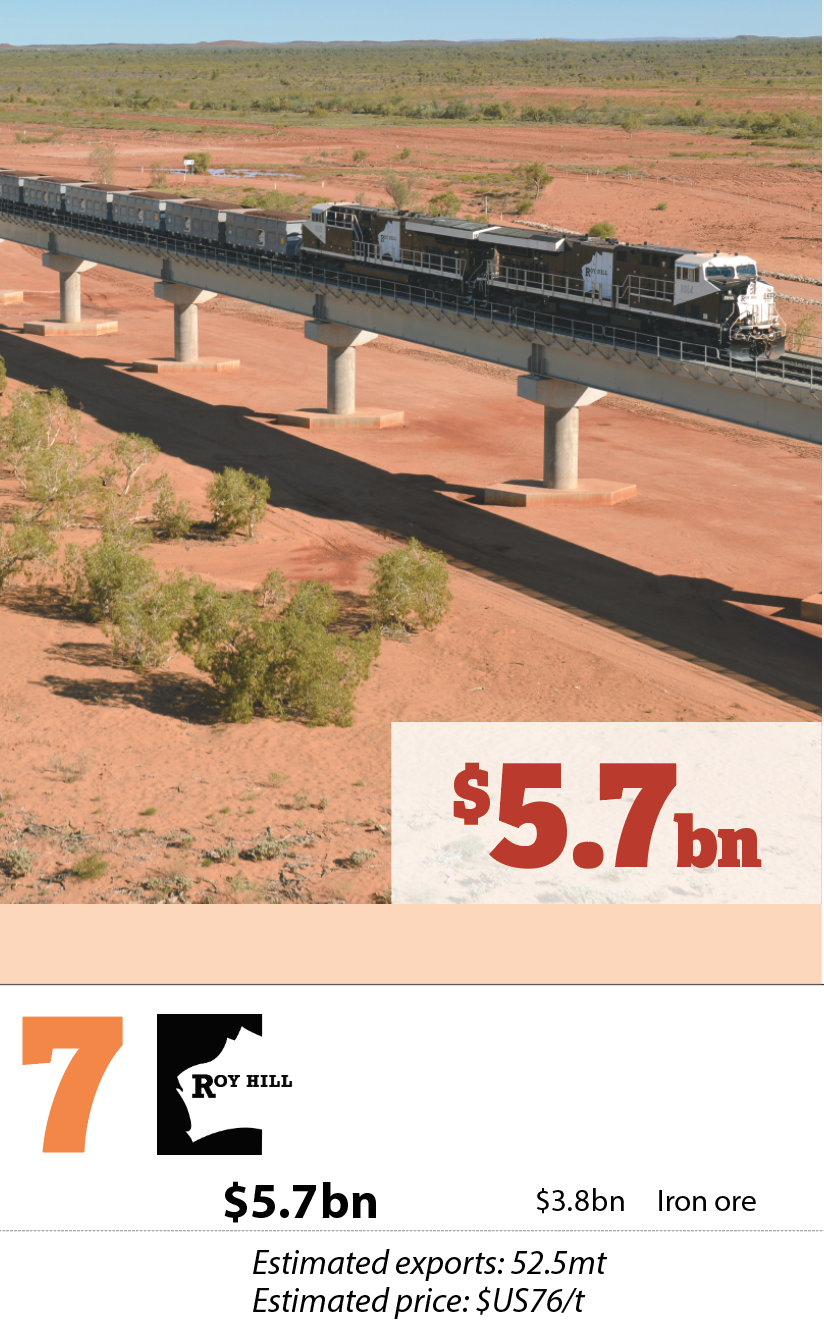 Numbers for Atlas and Karara are becoming more difficult to clarify, with Atlas now owned by Hancock Prospecting and Karara by Chinese company Ansteel.

For Karara, former owner Gindalbie Metals reported to the ASX that 7.5mt of magnetite was shipped in the year to March 2019, with a price of about $120/t.

That implies revenue of about $900 million over a year.

Mineral Resources provides a useful demonstration of two of the trends in this year’s data.

Its iron ore sales rose 52 per cent to be nearly $1 billion, while lithium output dropped 65 per cent to $230 million.

That almost netted out, with overall revenue down $91 million to $1.2 billion.

“This was not unexpected and mirrored some of the hype, and then financial pain, that the iron ore market experienced earlier this decade.

But managing director Chris Ellison also noted that the iron ore business had struggled earlier in the year because of heavy discounting of lower grades.

Further changes are expected in the ranking among lithium producers, however.

Talison Lithium may drop off the list in future years as output is sent to local refiners, with co-owners Tianqi Lithium and Albemarle Corporation likely to move onto the list when their plants are completed.

Similarly, Covalent Lithium, owned by Wesfarmers and SQM, will operate a Kwinana refinery with output of 44,000t. 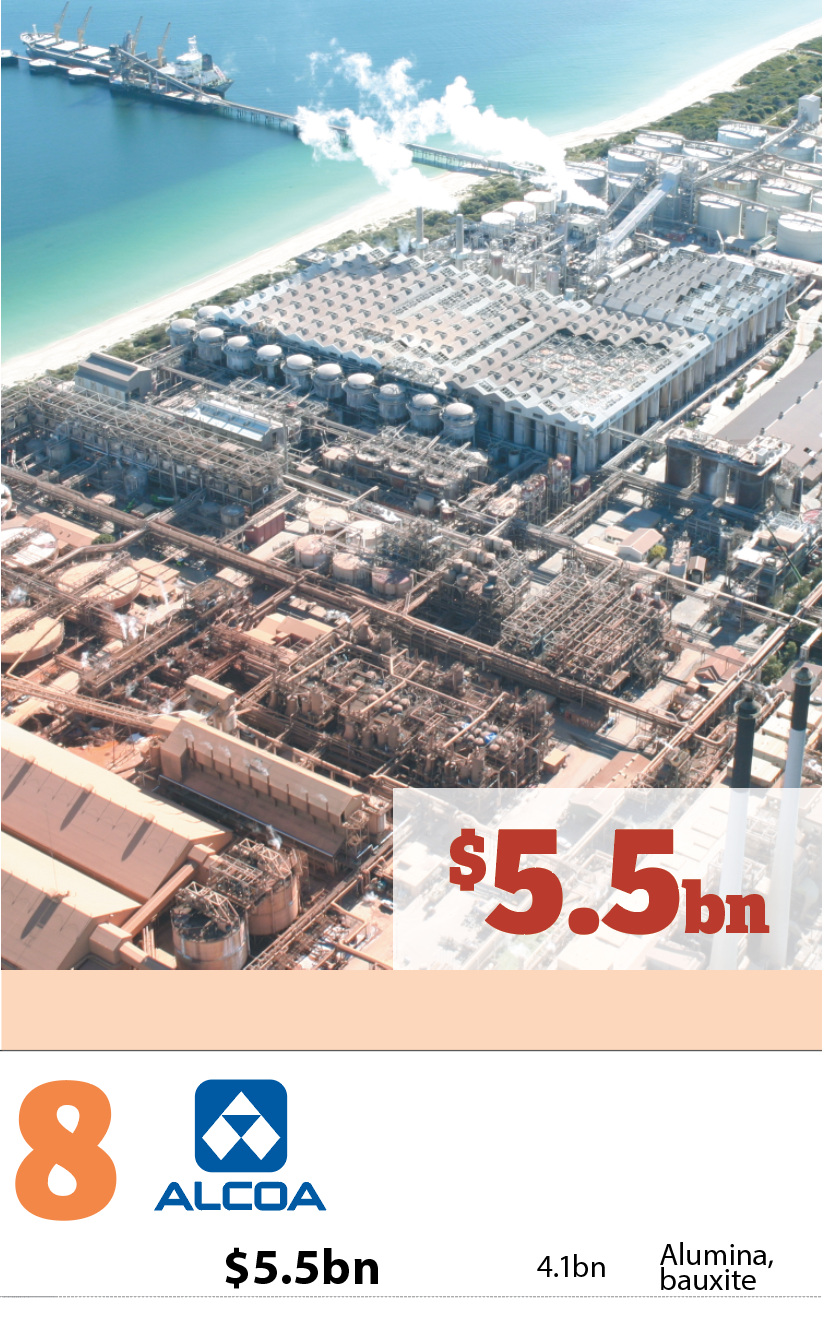 Perhaps lithium hopefuls will be encouraged by two other businesses that mine and process in WA – South32 and Alcoa, exporting alumina.

That followed a period of volatility on markets early in this financial year, with production and supply disruptions, although prices have since dropped.