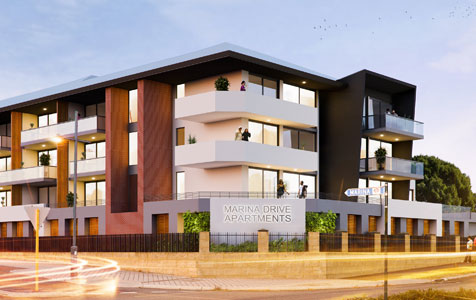 An artist's impression of the Marina Drive Apartments project.

An interstate developer has launched its first apartment project in Perth, near the banks of the Swan River, joining a long list of multi-residential projects in the City of Belmont.

Perth-based building company Pindan said today it had won a contract to build the luxury project, which will be known as Marina Drive Apartments, on behalf of Adelaide-based firm Starfish Developments.

It will comprise 35 apartments around seven kilometres from the CBD.

Pindan constructions director Mark Thompson said the project would boost the company’s growing portfolio, which includeds the recently-completed North One development in Subiaco and the under construction Paramount Apartments in Beeliar.

Pindan was ranked as Western Australia’s top apartment builder earlier this year by the Housing Industry Association, with 1,175 multi-unit starts in 2013-14.

Pindan’s performance in the HIA-Cordell Housing 100 was good enough to rank it fourth in the nation; however the company was ranked second in Australia in 2012-13, albeit with a lower starts number of 1,110 multi-residential dwellings.

“Our ability to deliver high-specification apartment projects has been widely recognised in the industry,” Mr Thompson said.

Starfish Developments project manager Craig McRostie said the project would be the first time the developer would work with Pindan.

“Pindan has an excellent reputation for constructing this type of development in Perth and was selected for the strength of their offer and good, all-round approach to the project,” Mr McRostie said.

The four-storey project, which is expected to be complete within 12 months, is the latest in a long line of apartment projects in the City of Belmont.

The developer’s director, Gavin Hawkins, said Vantage was one of the only apartment projects set to be developed in Perth which featured absolute river frontage. Mr Hawkins said he believed the fundamentals of Rivervale, which has been the subject of numerous warnings of oversupply over the last year, were “incredibly strong”.

The Vantage project is Edge Visionary Living's third development in the area.

“The Burswood Peninsula will explode in the next five to 10 years in terms of bars and cafes, and this really sits right next to it, but still away from it, which is great.

“You overlay that with a much-improved Crown Casino, which has been accepted as a five-star destination, the new six-star hotel coming up and the stadium, none of that existed 10 years ago.

“There are eight projects under construction now in Rivervale but in two to three years’ time it will all be gone and people will be talking about it as an opportunity missed.”

Also in Belmont, Business News reported last month that a long-stalled riverfront apartment project at the old Sandringham Hotel development site had been revived, emerging from a decade-long saga which had threatened to derail the luxury project.

Marketing for the second and third stages of that project, which will total 79 apartments, all with river views, is expected to commence soon.