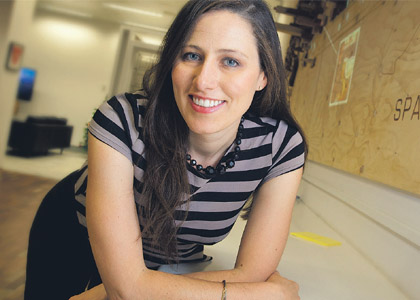 GOOD PLACE TO START: Claire Robertson is co-directing the launch of The Founder Institute in Perth. Photo: Annaliese Frank

A YOUNG Perth entrepreneur has teamed up with a leader among Malaysian start-up businesses in a bid to boost the success of local technology entrepreneurs.

Claire Robertson has returned to her hometown after five years in London and is preparing to launch the Perth branch of the US-originated ‘start-up accelerator’, The Founder Institute.

The institute aims to provide education and advice to budding technology entrepreneurs to help them commercialise ideas through start-up companies.

She told WA Business News there was little opportunity to progress that interest on her return to Perth.

“It’s a little bit difficult to tap into that stuff because it’s not very well publicised. There are a lot of events that happen ... it’s just that it’s difficult to find out about them unless you’re connected in some way,” Ms Robertson said.

She hopes the institute course, which will start in Perth next February, will complement work already started with the launch of Spacecubed earlier this year.

Spacecubed is a co-working area on St Georges Terrace intended to bring entrepreneurs together and foster collaborative working relationships.

Mr Dhakshinamoorthy is known for founding startupmalaysia.org, a not-for-profit initiative in Malaysia, and Warison Global, a project management company with an associated company providing entrepreneurial education.

He is also leader of Global Entrepreneurship Week in Malaysia and a fellow of the US government’s International Visitor Leadership Program.

Mr Dhakshinamoorthy has been involved in Perth start-up ventures including Curtin University’s Ignition program, and Startup Weekend, hosted by Spacecubed in September.

He was approached by The Founder Institute to launch the Perth chapter of the global accelerator, which Ms Robertson said could help bridge the gap between Australia and South-East Asia.

“Perth has a massive entrepreneurship community and there’s a lot going on ... (it’s) close to South-East Asia and shares similar time zones but it’s also English-speaking; that makes it attractive as a launch pad for English speaking entrepreneurs that are looking to market into Asia,” she said.

The course in February will feature mentors from Australia and overseas, who will work with technology entrepreneurs here.

Silicon Valley venture capitalist and Perth resident, Larry Lopez, said activity was ramping up in the local start-up scene, but Perth faced the disadvantage of not having a lot of entrepreneurs who had been successful with start-ups.

“In some regions you have lots of entrepreneurs who have a lot of experience and they’re available to share that; you have a bigger ecosystem for start-ups,” Mr Lopez said.

“In Perth we just don’t have that, and so an accelerator is an opportunity to bring those experiences and skills to bear on the market.”

The institute will also provide somewhat of a safeguard against failure for the intended 30 participants; it has a ‘graduate liquidity pool’ arrangement whereby graduates are asked to contribute warrants for 3.5 per cent of their company, which is then shared among graduates, the mentors and the institute.

In addition, if a company secures funding, its founder is asked to pay a fee back to the institute to enable it to grow.

One mentor already confirmed for the Perth course is David McKinney from Filter Squad, which has been successful in launching the Discovr iPhone app.

“Sydney has by far the strongest Australian start-up ecosystem ... Perth has relatively few success stories by comparison, (but) there’s a growing number of highly motivated and competent people returning to Perth after experiences overseas and wishing to contribute to the start-up scene here,” he said.

Mr Mcfarlane said the introduction of The Founder Institute to Perth could help reduce the rate of initial failure among entrepreneurs - a point supported by Spacecubed founder Brodie McCulloch.

“What it can potentially do is save them a lot of time or energy, and really validate their ideas and at the same time build their skills. So this might not be the idea that they are successful with, but it will give them the skills to carry out their next idea,” Mr McCulloch said.