Inside the political machine 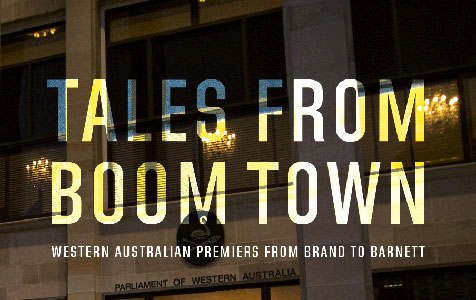 HIGH ON THE HILL: A new book from Business News columnist Peter Kennedy has captured more than 40 years of WA political machinations.

Students of local politics ought to add our columnist Peter Kennedy’s book, Tales from Boom Town, to their libraries.

Whether you really are a student or simply someone who feels they ought to better understand our recent political history, Kennedy’s book is an excellent chronicle of the past 40 years or so, a period he has covered extensively as a journalist with daily newspapers, as an ABC broadcaster and, of course, most recently at Business News.

Even those who have an intimate knowledge of Western Australian politics will enjoy this fast-paced book, which serves as a neutral observation of the key events in the terms of each of our state premiers since David Brand, and is sprinkled with personal anecdotes of a reporter who was on the scene.

I am still working my way through the book, but found the initial chapters I chose, on Carmen Lawrence and Richard Court, as a good taster for what I hope is the overall flavour of the book as a whole.

I was away overseas for last years of Ms Lawrence’s term and most of the first term of Mr Court’s reign, so I enjoyed the detail of that time as much as I did having my memory refreshed on a events that occurred when I was back in town.

While I am very familiar with the so-called Easton affair, which prompted the suicide of Penny Easton and damaged the later federal career of Ms Lawrence, it is a reminder of how significant an event this was at a time when I was in London and the absence of the internet made such news hard to come by.

When it came to Mr Court’s period as premier, I was surprised how much I had forgotten the influence of the native forest logging debate and the drama of the finance brokers’ scandal. It is hard to imagine the passion over trees that became so widespread that it prompted a breakaway version of the conservative side of politics, Liberals for Forests.

It is also hard to imagine such a corrosive issue as finance brokers ripping off thousands of investors, including churches, being allowed to fester in such a damaging way in this era of fast-paced news and web-based community scrutiny.

There are a lot of lessons and gentle reminders for all of us in here.

We tend to view the politics of the day through a contemporary prism and it’s worth revisiting the past to see what is relevant today.

Kennedy provides a sympathetic viewpoint of all the people he covers; resisting the opportunity judge anyone involved too harshly. Perhaps that is his style, but it also pertains to a different era when Perth was a lot smaller and connections often went beyond business.

For instance, Kennedy was at school with Ms Lawrence’s brother, Bevan, and the pair played cricket together. Mr Lawrence, a lawyer, became a major thorn in his sister’s side by forming People for Fair and Open Government, which campaigned against the corruption of his sister’s predecessors during the period known as WA Inc.

As much as any other individual it was his efforts that led to the Royal Commission that exposed much of the scandalous behaviour in the 1980s, which put the state out of business for nearly a decade.

Like any good journalist, Kennedy lets others do most of the talking – and he has clearly spoken to a lot of people.

Each referenced interview is dated and, I am pleased to note, many have occurred in the past year. I reckon this historical book research would have significantly informed his columns, which are well received and widely read.

African in the frame

I do like to give a plug as often as possible to local authors, especially if they come from the business world, which is not always a natural starting point for creative writing.

Not long ago I caught up for coffee with John Frame, the chief financial officer of not-for-profit group Bethanie, who, like Peter Kennedy, has recently published a book.

Frame heralds from the former African state of Rhodesia, which is now the failed-state of Zimbabwe.

Moving to Perth after serving in the air force during the civil war that engulfed that nation, he subsequently enjoyed a career as an accountant that seems to have been more interesting than most.

Due to my commitment to read Kennedy’s book (above) I haven’t cracked the first page of Frame’s novel, Retribution, in which he revisits Rhodesia’s nasty bush war; but I suspect that many in WA, through direct immigration or indirectly via the mining industry, would be interested in reading a novel informed by events of that time.