UPDATE: Japan's Inpex has pushed back its planned first gas date from its $20 billion Ichthys project by one year to 2016. 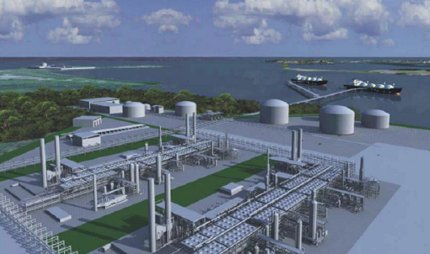 A design of the planned Ichthys processing plant in Darwin.

UPDATE: Japan's Inpex has pushed back its planned first gas date from its $20 billion Ichthys project by one year to 2016.

In a presentation to investors this afternoon, Inpex president Naoki Kurado said the final investment decision will now take place in the fourth quarter of 2011.

Liquefied natural gas production from the project's onshore facility is forecast to start in the fourth quarter of 2015.

Inpex had previously flagged than FID would take place in the second half of 2010, which was pushed back from an earlier intention to make a FID in the first half of this calendar year.

"We are taking the time now to optimise all aspects of the project's design to minimise the risk of increasing costs. This will require additional time and effort to achieve, but will ultimately lead to a more robust and cost effective design.

"In particular, we are focusing on reducing the weight of the offshore central processing facility and allowing more time in our schedule for the preparation and evaluation of tender proposals.

"There has been no change to any aspect of the Project's development concept, including the location of the onshore facilities in Darwin."

Mr Kurado's confirm comments made by Inpex director Masahiro Murayama earlier this week, who said the company would not be making a FID on Ichthys this year.

The project will extract gas from fields in the Browse area - off the north-west coast of WA - and pipe it some 890km to a processing plant in Darwin.

Ichthys is 76 per cent owned by Inpex while France's Total SA holds the balance.

Ichthys is planned to initially produce 8.4 million tonnes of liquefied natural gas each year, 1.6mt each year of liquefied petroleum gas and about 100,000 barrels of condensate each day.

The project is one of a number of gas projects that are being developed in the north west coast of Australia, including the $43 billion Gorgon project by Chevron which is also firming up its Wheatstone project, and Woodside Petroleum's Browse project.