Innovative UWA O-Tube awarded an A+

A partnership between oil and gas heavyweights Woodside Petroleum and Chevron, and the University of Western Australia is changing the design of offshore pipelines and cutting construction costs for the expensive infrastructure. 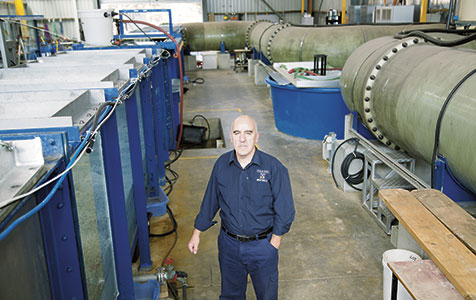 A partnership between oil and gas heavyweights Woodside Petroleum and Chevron, and the University of Western Australia is changing the design of offshore pipelines and cutting construction costs for the expensive infrastructure.

The collaboration has produced the O-Tube, which is described as a wind tunnel with water. It can simulate the cyclonic conditions created on the seabed that occur around the gas fields off the state’s northern coast.

The aim of the O-Tube project, which was initiated in 2010, was to reduce the costs of stabilising subsea pipelines.

UWA estimates about 3,000 kilometres of pipeline will be installed offshore in Australia during the next decade, costing more than $15 billion. About 30 per cent of the costs relate to stabilisation measures.

The Ichthys liquefied natural gas project, located in the Browse Basin off the north-west coast of WA, will build an 885km subsea pipeline to its processing plant in Darwin.

“The O-Tube has been used for studies to optimise pipeline design for Chevron’s Wheatstone project, which has provided us with significant savings in this area,” Mr Flaherty told Business News.

Design and engineering firms Wood Group Kenny and Atteris worked in conjunction with UWA, Chevron and Woodside to develop the project. Perth-based Atteris managing director Eric Jas said his company initiated the project with UWA, as a u-tube, in 2007 with a proposal to Woodside. Atteris had a key role during the design and construction phase and, Mr Jas added, Atteris remains the most frequent user of the O-Tube on commercial projects, working on a number of subsea pipeline and umbilical design projects which have resulted in significant cost savings in terms of their stability design.

The O-Tube allows researchers to track the impact of wave and current loadings on underwater infrastructure.

Woodside senior vice-president of health, safety, environment and technology, Shaun Gregory, said the award demonstrated the benefits of a collaborative approach between industry organisations and the university sector.

“Through working together the project partners have been able to significantly improve the future design of offshore oil and gas pipelines. This is a practical example of how embracing technology can achieve real cost savings for oil and gas companies,” Mr Gregory said.

The project has also attracted the attention of other major players in the oil and gas industry with BHP Billiton, BP, Arup, Apache, Advanced Geomechanics, and JP Kenny conducting tests with the O-Tube.

Winthrop Professor John Dell, dean of UWA’s faculty of engineering, computing and mathematics, said research completed on the O-Tube could lead to a change in the design standards used in the industry.

“The O-Tube program uses engineering solutions to optimise the competitiveness of industry while ensuring the safety of our offshore infrastructure,” he said.

The O-Tube is housed at UWA’s Shenton Park site, which is one of three locations the university is utilising for its planned $250 million E-zone development – a project to increase collaboration with industry.