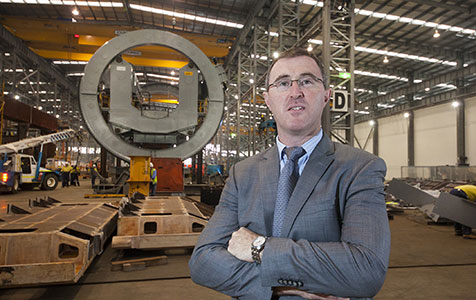 ON TOP: Pat Tallon says Civmec’s success is due to the constant quest for improvement. Photo: Bohdan Warchomij

For a business exposed to the ups and downs of commodity prices and the costs of the manufacturing sector, Civmec has had a good year.

The Henderson-based engineering and construction company increased revenue by 51 per cent the first three quarters of this financial year, compared to the same period a year earlier.

Net profit was up 22 per cent and tendering activity was at its highest level since the company started less than four years ago.

Its activity in the growing oil and gas sector has helped keep its income strong (having secured contracts for work on Chevron's Gorgon and Wheatsone projects) but chief executive Pat Tallon says innovation has been key to its competitiveness across the board.

"At a very early stage we realised that if we didn't start thinking a bit more innovatively then the work was going to go overseas," Mr Tallon told a recent Chamber of Commerce and Industry WA conference.

"We hear a lot of negativity in the market about how things have gone over the last year or so, but at the end of the day ... we're using new technology and innovation and we're actually succeeding.

"[The work] is there for the taking as long as you think outside the box every now and then and try to produce something a little bit better."

The company's contract for site civil work on Rio Tinto's Hope Downs 4 is proof of its delivery on that innovative approach.

Mr Tallon said Civmec faced a challenge in delivering its part of the project on time when a segment at an earlier stage was delayed and couldn't be handed over.

"While we weren't allowed into the area, we sat down and we thought of faster ways of carrying out the work," Mr Tallon told Business News.

"We designed modular formwork that could be quickly moved ... and over a short period of time we actually brought that element of the project off the critical path."

Civmec's $30 million fabrication workshop at the Australian Marine Complex has also been a key efficiency driver; the facility is located just 500 metres from the wharves, so oversize structures can be made at the facility and loaded for transportation without needing to cross any public roads.

Civmec credits much of its success to its employees.

"We constantly take note of their ideas and opinions on what we can do to make the job better for our clients," Mr Tallon said.

"You can never underestimate the value of your people, and that goes right down to the guy on the floor. Potentially, at the end of the day, they're the people that can make or break you."

Civmec's approach to getting the most out of its employees and their ideas involves placing accountability on their work, which Mr Tallon said was important in such a competitive industry.

In return, employees are rewarded with potential opportunities and free rein to, essentially, use their initiative.

"Obviously these people want to advance their careers so we try to open doors for them wherever we can to make that step up to the next level," Mr Tallon said.

"And we give them the opportunity to forward think and be innovative in what they do."