Innovation at heart of apartment JV

An innovative joint venture in Success led by the Department of Housing has provided a potential roadmap for the rollout of affordable apartments in the Perth metropolitan area. 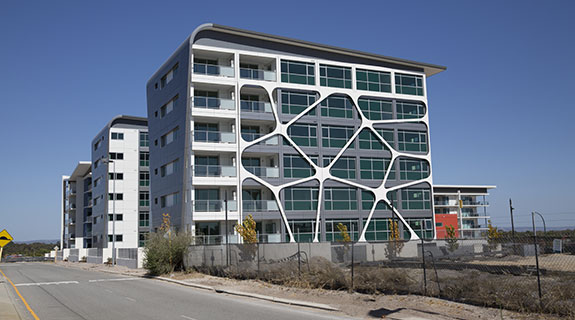 An innovative joint venture in Success led by the Department of Housing has provided a potential roadmap for the rollout of affordable apartments in the Perth metropolitan area.

Construction of the third stage of the Stella Village joint venture between the department and private developer Goldmaster Enterprises was recently wrapped up, with the building ready for the first residents to move in early in the New Year.

The Stella Village project is a long-term plan expected to run for another 10 years and ultimately comprise 11 stages.

The project is unique in many ways, as the department purchased a direct stake in Goldmaster and increased that shareholding to 54.5 per cent 2013, thereby assuming control of the company.

“The shareholders in Goldmaster were having trouble funding stages two and three through the GFC; they had a lot of money tied up and couldn’t get any back out,” he said.

“It made sense for us to see the project proceed and as such we’ve been continually investing capital in the project for the last few years.”

The other unique aspect of Stella Village is the department’s commitment to using emerging technologies to keep construction costs down, and subsequently roll out more affordable dwellings.

The Adara Apartments were considered to be another leap forward for affordable apartments, with the project utilising a modular construction method developed by Melbourne-based construction firm Hickory Group, which Mr Searle said had practically halved the normal construction timeframe for the building.

“It reduces cost, it reduces waste, and it’s a much greener outcome because conventional construction techniques are quite wasteful in terms of how they operate,” Mr Searle said.

“It also ensures a better quality product because you can control all of the elements in a manufactured environment that you can’t necessarily do on a building site.”

Mr Searle said the department would continue to focus on delivering affordable apartment products in close proximity to metropolitan area train stations, while new building techniques would also be considered on a case-by-case basis.