The two men vying for the nation’s top job at next month’s federal election talked up their infrastructure credentials during their first visits to Western Australia during the campaign. 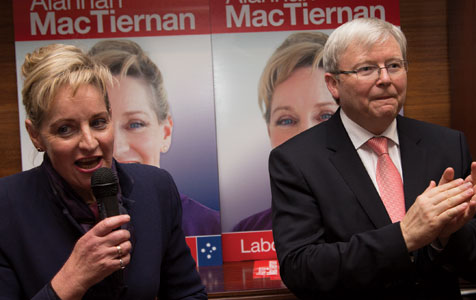 The two men vying for the nation’s top job at next month’s federal election talked up their infrastructure credentials during their first visits to Western Australia during the campaign.

The bypass road, which will form a section of the proposed Perth to Darwin highway, will stretch 40 kilometres between the intersection of Reid and Tonkin highways in Beechboro and the Great Northern Highway near Muchea.

Campaigning in the marginal seat of Hasluck over the weekend, Mr Abbott declared he wanted to be known as an “infrastructure prime minister” if elected.

The coalition’s $615 million commitment towards the Swan Valley Bypass exceeds the $418 million pledged by Labor in May’s federal budget, but prompted claims from Labor that Mr Abbott had simply taken money out of existing projects funded in the federal budget – namely the Tonkin Highway overpass project and works on Leach Highway and High Street.

Labor was also quick to point out that Mr Abbott has refused to match a promise of $500 million in funds towards the state government’s urban rail plans, including the MAX light rail and Perth airport rail link.

Despite this, WA Treasurer Troy Buswell welcomed the roads pledge, saying the extra funding injection would allow for the Swan Valley Bypass project to be delivered without having to be staged.

Securing federal funding for the state’s infrastructure needs is high on the agenda for the Barnett government, which is forecast to deliver its first budget deficit next financial year unless it can reduce record-high spending levels.

Speaking on the sidelines of the forum, Ms MacTiernan said funding metrics were often structured around the economic realities of the eastern states.

“It’s much harder to engage them or have them really understand what we’re talking about.”

Ms MacTiernan said while the state Labor government had delivered “massive things” during her time as a minister, she felt it could have gone harder on delivering infrastructure projects at the expense of keeping the state’s net debt-to-revenue ratio down.

Prime Minister Kevin Rudd visited Kununurra during his first visit west for the campaign late last week. While there he promised $10 million to help fast-track the expansion of the Ord River Irrigation Scheme to the Northern Territory by assisting in native title negotiations with traditional landowners.

Mr Rudd also inspected the Perth City Link project before visiting the Australian Resources Research Centre in the marginal electorate of Swan, where he announced Labor would invest $30 million in a new floating LNG research centre and a further $16 million towards a new oil and gas industry innovation partnership, to be led by Woodside.

He sought to quell concerns that WA would be disadvantaged by Labor’s plan to establish a special economic zone in the Northern Territory, telling reporters that zonal tax rebates could be established in the northern parts of WA and Queensland.

Both parties have pledged big money towards projects that have been coolly received by the business community during the campaign.

The coalition’s paid parental leave scheme – set to cost $5.5 billion per year yet, with about half of that cost to be met by a 1.5 per cent tax levy on the nation’s biggest companies – has come under attack from industry groups including the Business Council of Australia.

Labor, meanwhile, faced hostility last weekend when it announced that it would commit a further $500 million in support for the car industry if re-elected, with the additional funding to be enshrined in legislation.