Influence radiates from centre of power

SPECIAL REPORT: A small group of ministers and backroom advisers close to Mark McGowan will set the agenda for the new state government. 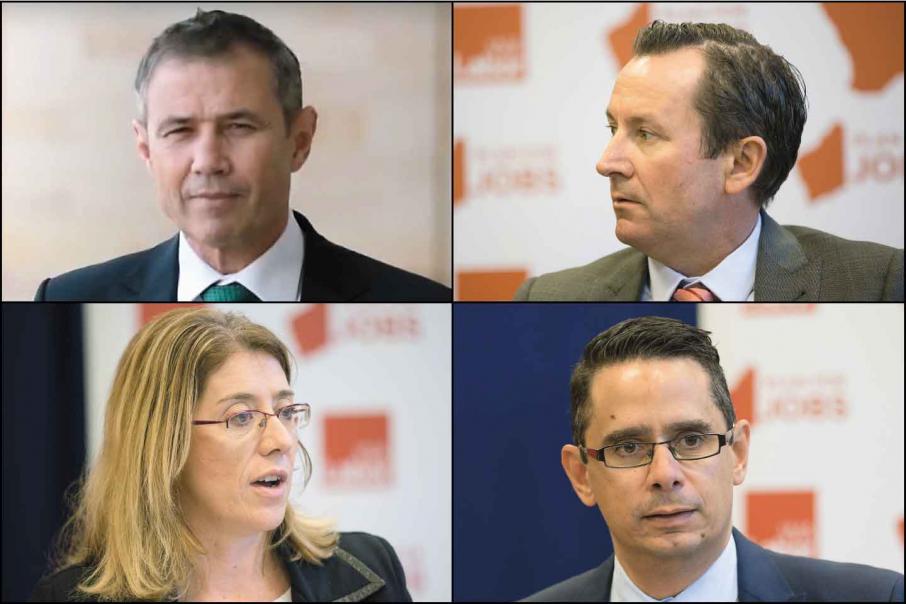 A small group of ministers and backroom advisers close to Mark McGowan will set the agenda for the new state government.

There’s an old adage that a government with half a dozen really good people is well placed to succeed, so it is instructive to realise how few really good performers were in Colin Barnett’s ousted government.

It is possible, however, to identify six people who will be pivotal to the performance of the McGowan Labor government.

This small group will be central to the task of setting and implementing the government’s strategy, and dealing with challenges like the state’s dire financial positon and the pressure that will be applied by powerful unions and other interest groups.

First and foremost is the 49-year-old premier. 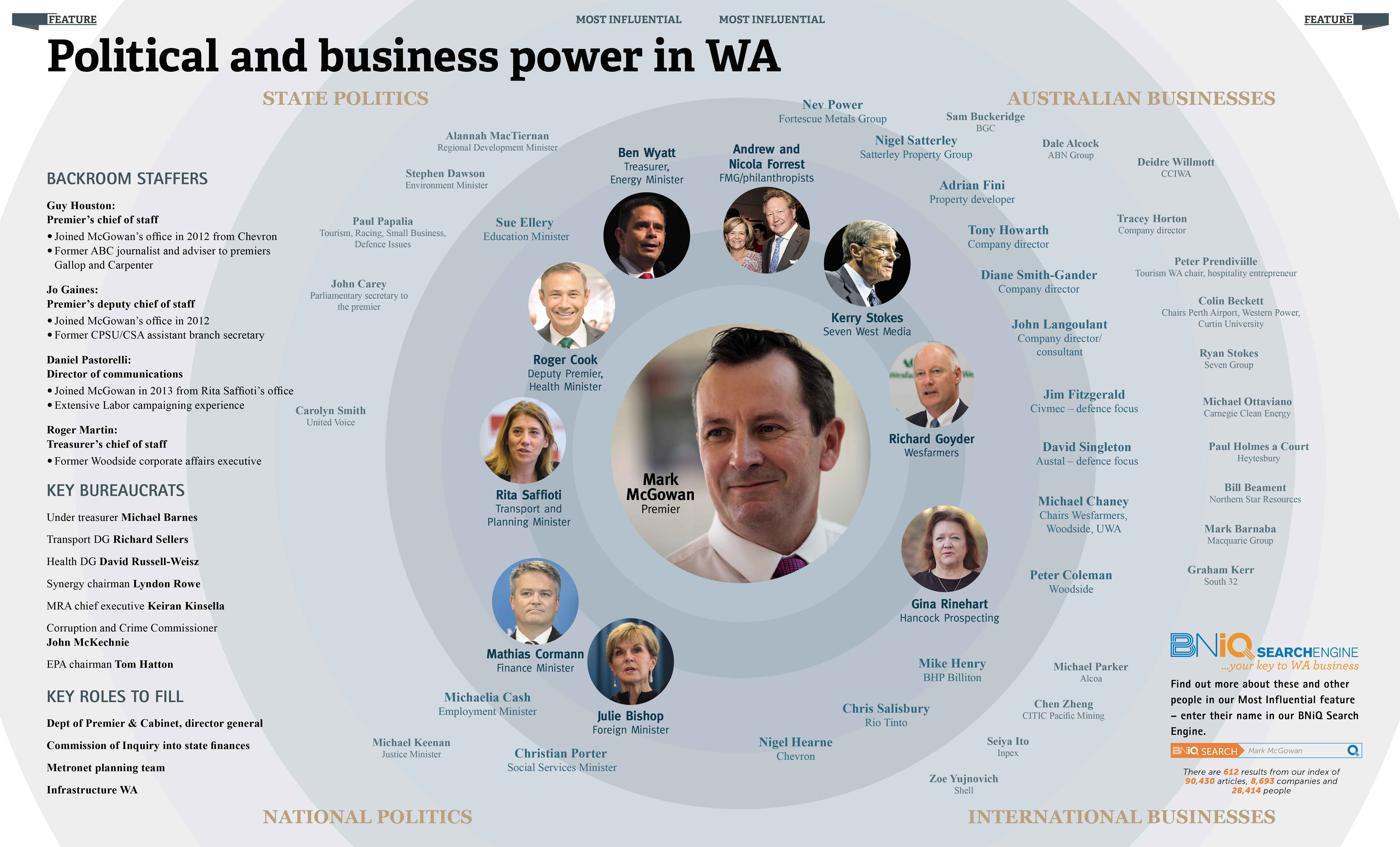 Mark McGowan, who is factionally non-aligned, has won power after 20 years in parliament and five years as opposition leader, and also brings ministerial experience to the job.

His key lieutenants include Ben Wyatt, who has the all-important Treasury portfolio and, somewhat surprisingly, the energy portfolio.

Another key figure is Planning and Transport Minister Rita Saffioti, who has 20 years’ experience as an economic and political adviser to Labor leaders, including former premiers Geoff Gallop and Alan Carpenter.

As deputy premier, health minister and a leading figure in the dominant left faction, Roger Cook will also be a major player in the new government.

Like Mr Cook, she is a member of the left faction and aligned to the powerful United Voice union, but more significantly is considered very close to the premier, having accompanied him almost every day during the election campaign.

Like Ms Saffioti, he worked for former premiers Gallop and Carpenter, and has been chief of staff since Mr McGowan won the Labor leadership in 2012.

On election night, Mr McGowan made a point of thanking Mr Houston along with his deputy chief of staff, former unionist Jo Gaines, and communications director Daniel Pastorelli.

This trio will be key advisers and gatekeepers to the premier.

Most other ministers are yet to appoint their staff, with one of the exceptions being Mr Wyatt, who has hired former Woodside executive Roger Martin as his chief of staff.

Most ministers in the new government have little, if any, experience of government.

A notable exception is former planning and infrastructure minister Alannah MacTiernan, who has been given the delicate task of reshaping the Royalties for Regions program.

Her high public profile, force of personality, experience and strong backing from the premier suggests Ms MacTiernan will be an important player.

Other notable ministers, particularly for the business sector, include Paul Papalia, who is close to the premier, and Stephen Dawson, who is an important factional player through his affiliation with the Australian Manufacturing Workers’ Union.

It may be premature to talk about future ministers, but one MP with bright prospects is former Town of Vincent mayor John Carey.

Having just been elected, he has been appointed parliamentary secretary to the premier.

While Labor’s election victory has opened many career opportunities, it’s instructive to also look at the people who have effectively been demoted.

Bill Johnston, Michelle Roberts, Kate Doust and Margaret Quirk, who are members of Labor’s right faction – the same faction as former federal minister Stephen Smith, who launched a quixotic leadership tilt last year – have all lost seniority compared with the shadow cabinet positions they held before the election.

Mr Johnston lost the senior portfolios of energy and state development, Ms Roberts is police minister but is no longer leader of the house, and Ms Doust and Ms Quirk are out of the ministry altogether.

Another loser was former shadow environment minister Chris Tallentire, who missed out on a ministry despite being aligned to United Voice.

He was responsible for one of the few blunders of the campaign, when he suggested Labor could cede ministerial responsibility for project approvals to the State Administrative Tribunal.

The government’s priorities, and the people who hold influence, will become more apparent in coming weeks.

One of the first priorities will be to establish a commission of inquiry into state finances, which Labor hopes will reveal opportunities for more efficient contracting and other savings.

Another priority will be appointing a planning team to progress the Metronet public transport project.

Reviving cabinet’s expenditure review committee, members of which will include Mr Wyatt and Ms Saffioti, is another very high priority.

Less immediate, but still important, will be the establishment of Infrastructure WA, which will be used to frame a long-term infrastructure plan for the state.

Another, even more important, position due to be filled this year is a permanent director general of the Department of the Premier and Cabinet.

As Business News reported online last week, there is speculation the role will be filled by Darren Foster, who was chief of staff to Mr McGowan in the Carpenter government.

One of the big talking points around the new government is the influence of unions, especially as 10 of the 17 ministers are aligned to specific unions.

The union influence stems from their financial muscle and organisational capacity, which they use to sign up party members and win control of branches.

Combined with their direct votes at Labor’s state conference, this gives unions influence over both policy and candidate selection, and that flows through to the selection of ministers.

It is the biggest union in the dominant left faction, and its influence is reflected in the fact four ministers, including Mr Cook and Ms Ellery, are aligned to it, as is newly appointed Cabinet secretary Amber-Jade Sanderson.

There are also four ministers aligned to the Australian Manufacturing Workers’ Union.

Notably, no ministers are aligned to the Maritime Union of Australia or the construction union (CFMEU).

They are two of Western Australia’s noisiest and most militant unions, but have almost no representation in parliament.

Their limited political influence is illustrated by Labor’s strong support for an outer harbour development at Kwinana, despite strident opposition from MUA state secretary Christy Cain.

Union and faction affiliations are not always straightforward.

Michelle Roberts and Margaret Quirk, for instance, are aligned to the SDA (the Shop, Distributive and Allied Employees Association).

They had the support of former SDA secretary and right faction leader Joe Bullock, but aren’t as close to current secretary Peter O’Keeffe.

Daniel Smith, principal of government relations firm Campaign Capital, said every Labor government had a mix of people with union backgrounds and those without.

“This government is no different from the Hawke and Keating governments, or the Gallop government, in that regard, and industry should have nothing to fear from this,” he said.

Mr Smith believes the government will reflect the premier’s pro-business approach, which was evidenced during his time as a minister in the Gallop and Carpenter governments.

“Mark was elected on a platform of diversifying the economy and creating jobs,” Mr Smith said.

“He is committed to cutting red tape for business. By nature, he is someone who listens, then acts. All of this is a great opportunity for industry.”

He said anyone looking to engage with the new government should provide solutions.

“There could be enormous opportunities for businesses that have innovative solutions on how to deliver infrastructure and services,” Mr Smith said.

Hawker Britton director Megan Anwyl, who has just stepped down as president of the WA Labor Business Roundtable, said she took on that role to help ensure an effective policy dialogue with the private sector and industry groups.

“A key reason why WA Labor had a landslide win is that the current cabinet and other MPs worked so hard to engage with the wider business community,” Ms Anwyl said.

Cannings Purple director Richard Harris agreed Mr McGowan and his team had spent a lot of time talking to business and formulating policy.

“This strong basis will serve them well,” said Hr Harris, whose firm is ranked on the BNiQ Search Engine as the largest lobbying business in WA.

“I am confident the ministers who hold the key economic and infrastructure portfolios will hit the ground running.

“They have all put in the hard yards and have a clear idea of what they want to achieve.”

Labor’s big win in WA has already had an impact on federal politics, highlighting the state’s raw deal on the distribution of GST revenue.

It will also trigger a spat over infrastructure funding, with Labor wanting the $1.2 billion of federal money allocated to Perth Freight Link shifted to Metronet.

The large swing to Labor also means several federal seats could change hands at the next election.

The most notable is Pearce, held by senior minister Christian Porter, who is likely to face a fight for political survival.

It is likely the McGowan government will be supportive of the resources sector.

That being the case, and with no big expansion projects on the cards, the giant multinationals that dominate the resources sector in WA are expected to quietly focus on their existing operations.

They have huge business operations in WA, will continue to influence public policy debates, either directly or in Mr Stokes’ case through his media outlets, and, importantly, they are investing in the agricultural sector.

Any business involved in potential growth sectors, such as agriculture, tourism, hospitality, defence, technology, renewables and education, has potential to be more influential.

A business leader who will continue being influential is Richard Goyder.

He is due to retire as managing director of the state’s largest company, Wesfarmers, but has already been tapped as chairman of Woodside Petroleum and the AFL.

That puts him at the peak of WA’s largest oil and gas producer and the country’s biggest sport, and means he will influence negotiations over usage of Perth Stadium.

Many people will be watching to see if property developer Nigel Satterley’s public support for Labor helps his business.

Mr Satterley and other developers are set to benefit from Labor’s opposition to the creation of a wider buffer between industrial and residential land uses near Kwinana.

Labor sources say the premier and his deputy, whose electorates are in the area, have held the same policy for many years and have not been influenced by recent events.

With Labor planning big land sales to help its budget repair, and prime sites such as Princess Margaret Hospital to be developed in future, there will be plenty of other opportunities for developers to benefit.

One measure of influence is Klout scores, which measure the engagement generated by a person’s social media output.

Rather than targeting frequency of output, Klout looks at the way the audience reacts, such as liking, retweeting, sharing or commenting. 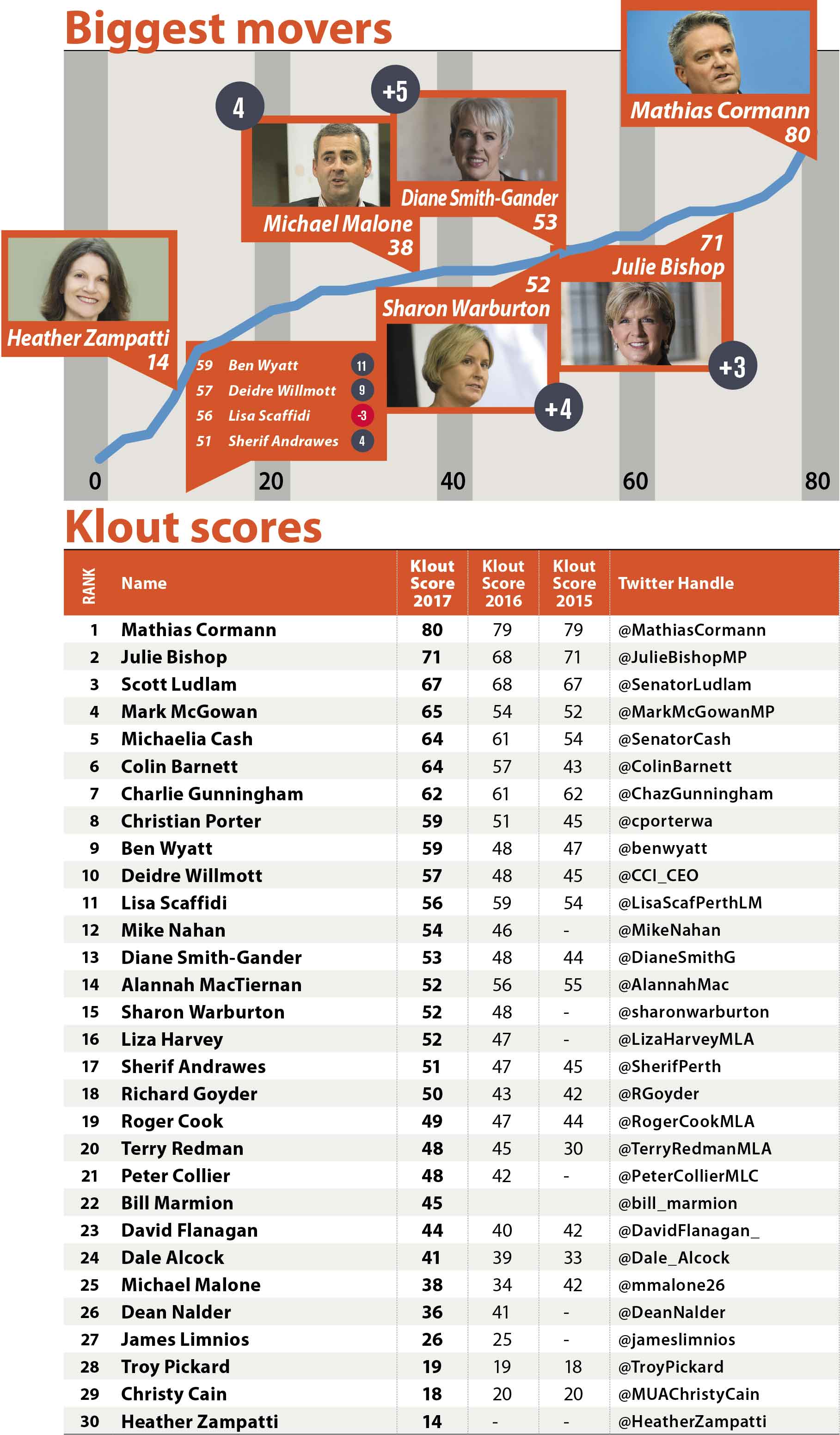 A score of over 63 puts people into the top 5 per cent of all online influencers (only six of the people on the list are over 63).

Politicians dominate the top of the list, as they tend to get most feedback.

The biggest movers (+11 in score) are Mr McGowan and Mr Wyatt.

Plenty of business people are not active on social media, and/or not being picked up by Klout, but there are some standout performers such as Deirdre Willmott, Diane Smith-Gander and Sharon Warburton.