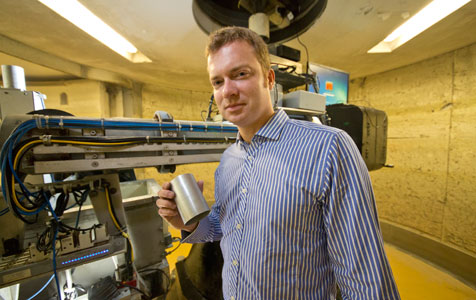 Western Australia could become a world leader in offshore engineering expertise if it continues to invest in research, a leading academic says.

David White was announced last month as the inaugural Shell EMI chair of offshore engineering at the University of Western Australia. His research is funded through a new partnership with Shell Australia, with further funding support for two associate professors and three PhD students.

With a fast-growing list of floating LNG developments in the pipeline off WA, Professor White told Business News it was vital for industry to invest in research that could be applied to future gas projects on a global scale.

“When we wrote a vision statement for this chair recently, the one-line aim is to build up offshore engineering in WA, so not just for the university but other companies in town,” Professor White said.

“We want to build up offshore engineering expertise so that we position ourselves in the same way that Houston and Aberdeen and Oslo are positioned in the North Sea and the Gulf of Mexico.

“They’ve got technology that’s being applied around the world. WA should be using the current boom to position itself in the long-run with facilities and an educational base as well as skills in the companies in town that mean we can roll on and serve projects elsewhere in the world, not just the gas projects we have at the moment.”

Professor White’s academic life began at Cambridge, where he was offered a lecturing role shortly after completing his PhD in geotechnical engineering.

While Cambridge is in close proximity to the gas fields of the North Sea, Professor White said he was drawn to the less established challenges facing offshore engineering in WA. He spent several years collaborating with local academics before taking a full-time role at UWA in 2006.

UWA’s Energy and Minerals Institute is closely connected with major industry players, with Woodside, Alcoa and Chevron also funding research chairs alongside Shell. The result was that students were engaged in research with tangible benefits, he said.

“To be honest, if you want to make your academic work have impact you need to be connected to industry,” Professor White said.

“You can’t just write papers and expect somebody to read them and then use them. You need to be out there talking to industry about the research and understanding their problems, then bringing them back and doing the research.

“That’s the way that universities ultimately justify their existence; it’s through changing the way that things are done through our research.”

With first production scheduled for 2017, Shell’s $12 billion Prelude floating LNG development in the Browse basin is likely to be the first of its kind. Prelude’s anchoring systems were designed using UWA technology and students at the university have contributed to research for a number of other offshore projects in the works, Professor White said.

“Students here read in the newspapers about all these future projects and by studying here and learning about these structures, they can become involved in all these mega-projects,” he said.

Professor White’s research is centred on investigating how the seabed behaves and responds to instability, such as earthquakes, so that engineers can design platforms and gas pipelines that can handle such forces. These forecasts are made possible with the assistance of high-spec facilities like the O-tube, which simulates seabed conditions during cyclones.

Understanding such behaviour will mitigate potential environmental disasters, as well as allowing companies to increase their competitiveness through a reduction in labour costs and materials.

“The implications for this are huge,” Professor White said.

“For a typical gas pipeline, you might be spending $5 million per kilometre of pipeline to get it there and a lot of that money is spent on concrete that you put around the pipeline to help it stay there.

Shell Australia chair Ann Pickard said in a statement that the partnership with UWA would build on existing strengths in offshore research and encourage closer ties between industry and universities.

“The fact is that neither party can do this work in isolation; the real value comes when industry and research organisations work closely together,” she said.

“Increasing local capabilities in offshore engineering is not only positive for the Australian industry and specific projects, but also works to position WA as an offshore centre of excellence.”