Perth looks set to have its own indoor skydiving facility after Sydney-based leisure firm Indoor Skydive Australia announced it had signed an offer to lease a block of land in Belmont to construct a 4.2-metre vertical wind tunnel. 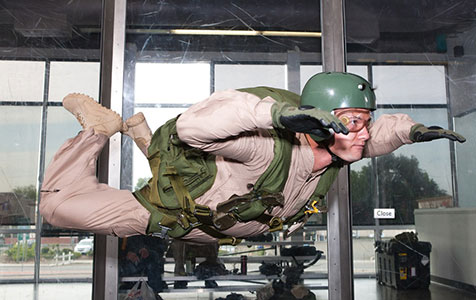 The SAS uses the vertical wind tunnel in Sydney to practise free-falling.

Perth looks set to have its own indoor skydiving facility after Sydney-based leisure firm Indoor Skydive Australia announced it had signed an offer to lease a block of land in Belmont to construct a 4.2-metre vertical wind tunnel.

It will cost ASX-listed ISA between $10 million and $12 million to build the glass chamber on a 3,931 square metre block, which is believed to be located on the corner of Great Eastern Highway and Belmont Avenue.

Construction is expected to begin next year and the facility is due to be operational in mid-2016 under a 20-year lease term, with two additional 10-year options.

ISA’s facilities allow human 'flight' within a safe environment and are used by tourists, skydiving enthusiasts and the military.

“The prices will be less than Sydney, which starts at $89 for a two-flight package,” ISA chief marketing officer Brett Sheridan said.

“The whole experience lasts about an hour, but the actual flight time lasts about a minute, just the same as you would skydiving out of a plane.

“I wouldn’t say it’s a strenuous exercise, but if you do more than two or three minutes in the wind tunnel then you’re really feeling it,” he said.

Architectural designs are under way for the Perth project and the request for development approval is expected to be submitted by the end of the year.

The facility will include retail, food and beverage services.

The project follows the opening of the Perth Wake Park in Baldivis earlier in the month, which is the only cable wakeboard park in the state.

In 2006, Business News reported that West Coast Snowpark was planning to build a $70 million indoor ski park south of Byford, however director Steve Pretzel said the project was in a “resting phase”.

“The stumbling block was the energy consumption,” he said.

The company has since been looking into alternative options to lower the predicted energy costs, such as renewable energy and solar power, but for now there are no plans to progress the project further.

However, Mr Pretzel said within the next couple of years, the push to develop more iconic attractions in Perth would hopefully make the indoor ski park a more financially viable project.