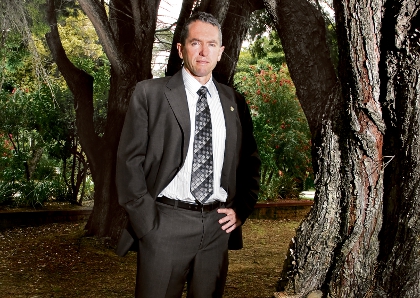 Indonesian agricultural minister Suswono told the ABC that Indonesia was moving towards having a completely self-sufficient beef industry, meaning Australian exports to Indonesia will be phased out.

The previous permit for 500,000 live cattle imported from Australia per annum has been reduced to 283,000, according to the Western Australian Farmers Federation.

The country has also allocated permits for 34,000 tonnes of boxed beef for all importers, which is less than the 48,500 tonnes of beef product Australia alone exported to Indonesia in 2010.

WA agricultural minister Terry Redman said today that the numbers being touted will certainly not be good for WA beef producers who supply a large part of the trade to Indonesia.

He told ABC Radio it follows on from a big hit the industry took earlier this year when the federal government suspended live cattle exports to Indonesia over concerns about inhumane treatment of animals in abattoirs there.

Mr Redman said it was probably accurate that the Indonesian decision was made largely because of its push for self-sufficiency.

But he said he had little doubt that Indonesian decision makers would have been influenced somewhat by Canberra's export ban decision made on short notice.

"That is something that is going to weigh on their minds in decisions about import permits."

Mr Redman said WA had a good relationship with Indonesia and hoped to maintain it.

"Over time Indonesia will make its judgments about how self-sufficient it can be and we're hoping that if they do need beef, if they do need protein, then of course Western Australia is a good source of that product."

He said other market opportunities needed to be explored and he hoped to travel to the Middle East next year to do just that.

The state opposition has called on the state and federal government to support the beef industry by promoting chilled meat exports.

“The State and Federal Governments must work together to support the state’s beef industry and promote chilled meat exports as an alternative to live exports,” Mr Ripper said.

“The Government needs to step up to the plate by endorsing the chilled meat export industry and offering incentives to establish a private sector abattoir.

“It is in the State and Federal Government’s best interests to offer incentives to support the private sector to build an abattoir and look at alternatives to ensure the long-term prosperity of the beef industry.”

Western Australian Farmers Federation president Mike Norton said he was deeply concerned the reduction would have a severe impact on northern and southern cattle producers.

"It appears that the Labor Government’s decision to suspend the live cattle trade earlier this year is continuing to have a significant effect," Mr Norton said.

“Only last week, the Minister for Agriculture, Joe Ludwig, was announcing that the value of farm exports would increase by around 6% in 2011–12.

“WAFarmers calls on the Federal Government to explain whether they had any indication of the Indonesian Ministry for Trade’s decision and if so for how long.

“This decision will be a devastating Christmas present for northern cattle producers."

WAFarmers has called upon the Federal Government to advise how they are going to support producers and associated industries that will be impacted by Indonesia’s permit reductions.