Australia’s only state-based not-for-profit indigenous tourism association is rolling out its new strategy and calling for support from local WA business. 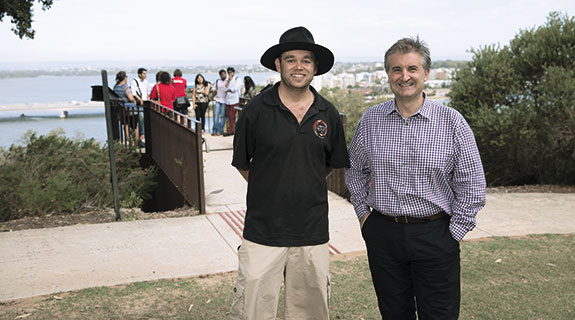 Australia’s only state-based not-for-profit indigenous tourism association is rolling out its new strategy and calling for support from local WA business.

Western Australia’s peak association for indigenous tourism will reach out to local corporates in the coming months as it moves to its reduce reliance on state funding.

Established as a legal entity in 2002, the Western Australian Indigenous Tourism Operators Council has mostly relied on Tourism WA funding to provide services to its membership-base of Aboriginal tourism operators.

In the recent budget, the state government allocated $4.6 million over four years for Aboriginal tourism product development, which will be rolled out by WAITOC with the approval of Tourism WA.

With its next period of funding secured, WAITOC will shift its focus to the corporate sector as it implements a new business strategy from July.

“We’re not reinventing the wheel, this is being done overseas, it’s just Australia is catching up in the space,” he said.

WAITOC is the only state not-for-profit association of its kind in Australia.

The current round of state funding will be used to develop export ready businesses for WAITOC to market internationally.

The state government funding will be rolled-out in the coming months, after cabinet’s final sign-off of the plan, which will in part allow the continuation of an existing pilot development project that began last March funded by the federal government.

The project is focused on developing 15 indigenous tourism operations in Perth and the South West into market-ready products, and Mr Haigh said he hoped to use the new state funding to continue those businesses’ development.

The $4.6 million from the state government will provide funding to around 35 per cent of WAITOC’s 119 members, and Mr Haigh said deciding which businesses qualified for assistance would be a challenge.

Mr Haigh said a greater level of corporate funding would ensure all members benefited from the organisation’s resources.

“I’ve made it clear to Tourism WA … to reduce WAITOC’s reliance on government funding we should now start talking to corporates, hence this strategy,” he said.

The aim for the current financial year is for this WA government portion to decrease a modest 3 per cent to 76 per cent.

While Mr Haigh acknowledges this target is still a long way short of what’s required to be self-sustainable, he has set a goal of 50 per cent funding from the corporate sector through a range of initiatives by 2018.

“We’re not talking millions of dollars, we’re talking hundreds of thousands of dollars … a lot more money than that has gone into indigenous mining companies, so I think its very achievable,” Mr Haigh said.

WAITOC has planning under way for one such initiative – an Aboriginal tourism showcase event this year at Kings Park, which would be the first such event in WA.

As part of the event, 21 export-ready indigenous tourism businesses will host a stand at the event, which has been scoped, but funding has yet to be secured.

Mr Haigh said as part of the strategy, he would be meeting with more than 600 companies in Perth.

As part of its goal to double the tourism value from $6 billion to $12 billion by 2020, the state government identified indigenous tourism as a key industry in achieving this goal.

It outlined the need to provide every visitor to WA with the opportunity to have an authentic Aboriginal tourism experience.

The most recent figures from Tourism Research Australia show the state appears to be on track to meet the target, with the total contribution to the industry reaching $8.76 billion in the 2013 financial year.