Three indigenous groups across Western Australia have found different ways to pursue training, employment and financial goals for their people. 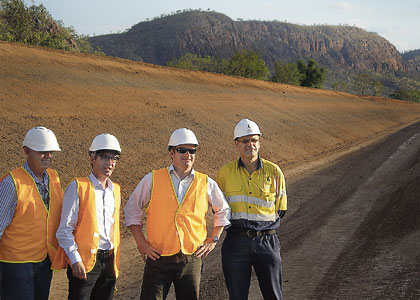 Three indigenous groups across Western Australia have found different ways to pursue training, employment and financial goals for their people.

Evan Maloney has been burnt in the past and is determined it won’t happen again.

As chief executive of the Ngarluma and Yindjibarndi Foundation Ltd (NYFL) in Roebourne, he has partnered with a range of businesses in pursuit of jobs for his 1,500 members and a secure financial future for the foundation.

Mr Maloney has particularly bad memories of one Perth-based building contractor that typified an old approach.

“The white-fella mob signed up the black-fella mob and then pissed them off,” he says.

That disappointing experience sits in the past; the future lies with a series of business partnerships that are delivering skills and experience to NYFL’s members.

The foundation’s first partnership was with catering and maintenance company Compass Group. It was followed a year ago by a joint venture with civil contractor NRW.

“It’s exceeded all my expectations,” Mr Maloney says of the NRW joint venture.

He is keen to build on that success, signing a joint venture last month with contractor Brierty that will pursue urban infrastructure works in the Pilbara.

The next step will be a joint venture with a building construction company, which he expects to finalise in the next month.

Mr Maloney says a measure of success for the joint ventures is the wide range of opportunities, with indigenous people doing everything from gardening and cooking to being machinery operators and administrators and sitting on the governing boards.

He says the foundation also manages some of the procurement functions for its joint ventures and has bought equipment that it leases to them.

Mr Maloney sees the joint ventures as a stepping stone to NYFL becoming a contractor in its own right. “We can’t go on hanging on to other people’s shirt tails, we need to be able to do it ourselves,” he says.

Brierty chief executive Peter McBain says 11 per cent of the company’s staff are indigenous and the NYFL joint venture is an opportunity to do more.

“It’s the right thing to do, but it also provides a labour source,” Mr McBain says. “It’s good business.”

MG Corporation chief executive Franklin Gaffney shares some of the goals being pursued by Mr Maloney.

He is seeking to build the capacity of the Miriuwung and Gajerrong people, the traditional owners of the east Kimberley.

The development of the Ord River irrigation area has provided MG Corp with an opportunity to build skills and secure employment opportunities.

During the phase 1 expansion, which was awarded to the Moonamang joint venture, comprising Leighton Contractors and Indigenous Business Australia, MG Corp achieved some progress.

MG is aiming to achieve a lot more during the phase 2 expansion, which was awarded late last year to Leighton Contractors in its own right.

To that end, it has established MG Services to provide pre-employment training and support, as well as on-the-job training and mentoring.

“MG Services will, in a sustained and tailored way, address the obstacles faced by indigenous people who wish to enter the workforce,” Mr Gaffney says.

“All employment-support services will operate together, under one leadership team.”

That leadership team will be made up of representatives from MG Corp, the state government and Leighton Contractors. It has been touted as the first of its kind in WA.

While there are many similarities in the strategies pursued by NYFL and MG Corp, one area of difference is the value they ascribe to goals.

• 70 indigenous jobs on the phase 2 construction project, which will employ 250 people at its peak.

• A further 35 indigenous people in full-time employment in Kununurra.

• Contracts to the value of at least $4 million awarded to indigenous businesses.

• The creation of new MG Corp businesses that secure contracts to the value of at least $2 million.

• 30 indigenous traineeships in the Kununurra public sector by 2015.

Mr Maloney is also keen to maximise indigenous employment on NYFL’s joint ventures, but says that is not the only objective.

“The more (jobs) we can create the better, but it has to be real jobs,” he says. “I’d rather have 5 per cent if they are good, contented and willing workers.”

Following the establishment of MG Services, the next step for MG Corp will be an alliance with Charles Hull Contracting, which is being finalised.

Waroona-based Charles Hull has been active in the Kimberley for some years and is one of several contractors to have provided employment to indigenous people in the region.

The alliance is designed to be a win, win – MG Corp will use its position to help secure contracts, and Charles Hull will aim to employ and train 40 indigenous workers.

Mr Gaffney says that, with a pool of skilled and experienced labour, MG will be in a position to establish its own civil contracting business that can be a joint venture partner.

The Njamal People in the north Pilbara have taken a different tack to other indigenous groups.

Its latest deal, announced just before Christmas, proposes the joint venture development of a new iron ore mine with Fortescue Metals Group.

Fortescue says that in exchange for certainty of tenure for the land covered by its North Star and nearby Glacier Valley magnetite projects, the Njamal People will become co-owners and joint operators of a separate magnetite mine adjacent to North Star.

In a statement, the Njamal People say the agreement provides “a base for economic self-determination as well as putting in place exclusion zones to protect sites of cultural significance”. The agreement comes after four years of negotiation, though details like the precise location of the mine and the ownership structure have still not been finalised.

The impact of this agreement will be tied to the North Star project actually proceeding, and there is no guarantee that will happen.

It follows an agreement the Njamal struck with Atlas Iron in 2008.

The original agreement related to the Abydos iron ore project, which was pushed back in Atlas’ development queue but is slated for development this year.

Since 2008, Atlas has discovered two additional iron ore deposits, at Mt Webber and McPhees Creek, which will also be covered by the agreement.

Mr Brinsden says Atlas’ main focus has been on helping to build the capability of the Njamal people, particularly through its work with Port Hedland business Indigenous Training Australia.

Atlas is doing the same with the Ngarla, whose land covers the Pardoo mine, further north.

While the Atlas and FMG agreements hold great opportunity, a third agreement struck with Moly Mines in 2007 has come to nought.

Moly announced just before Christmas its Spinifex Ridge project was being shelved because of the slump in molybdenum prices.