Indigenous art back from the US 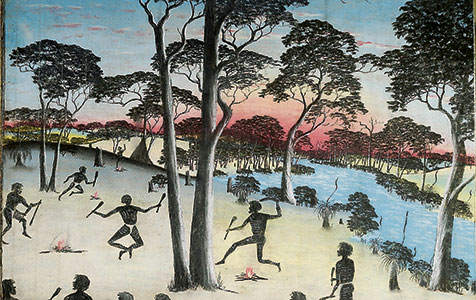 COMING HOME: Barry Loo's On the Alert is one of the artworks returning to WA

MORE than 100 pieces of indigenous art will return to Western Australia after Curtin University and New York's Colgate University signed a memorandum of agreement to return the works from the US.

Noongar children from the state's Great Southern region, who were part of Australia's stolen generations, created the 119 pieces, which include drawings and paintings produced between 1945 and 1951 at the Carrolup Native School and Settlement.

The entire collection will return to WA from Colgate, a liberal arts college where it has resided since 1966.

The full collection is expected to arrive at Curtin by the end of June, where it will be displayed at the university's John Curtin Gallery in Bentley.

"A repatriation of this significance is a rare occurrence and we want to make the work as accessible as possible to both the indigenous and wider WA community," he said.

"We will be looking towards a live exhibition in August of all the works."

The agreement comes after more than a year of dialogue between Colgate and Curtin, alongside representatives from the Mungart Boodja organisation.

Ellen Percy Kraly of Colgate University initiated talks with Curtin and Noongar leaders and was pleased the work was returning to its formative place.

"The relocation of the art will allow both the conservation and exhibition of the work for future generations of Noongar people and others in Western Australia," Professor Kraly said.

The universities have been collaborating on study of the artwork and joint programs will continue once the work arrives in WA.