THE Indian Ocean was the great 'silk sea route' Australia's great new frontier and, in many respects, its future, a report launched last week has concluded. 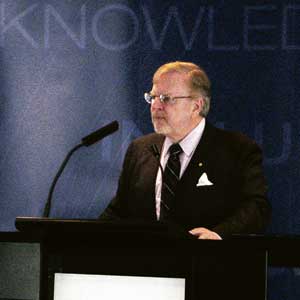 NOT TO BE IGNORED: Greg Copley says the Indian Ocean region is important for Australia’s future security and economic viability.

THE Indian Ocean was the "great silk sea route", Australia's great new frontier and, in many respects, its future, a report launched last week has concluded.

He said Australia had never embraced the reality that it was a society dependent on the oceans, but now, perhaps for the first time, it was pivotally placed in a region of change, growth, opportunity and unmistakable challenges.

Former WA governor and FDI chairman Major-General Michael Jeffery described Mr Copley as one of the greatest strategic intellects he had ever met.

Mr Copley said Perth was one of the global capitals of the resources industry and a vital component in the Indian Ocean economic community.

"The strategic significance of the region is that it is home to 2.2 billion people, is a major transit region for global trade, traversed by major sea-trading routes to global markets and has a combined gross domestic product worth trillions of dollars," he said.

"The Indian Ocean region is also the world's third largest ocean, covering one-fifth of the earth's surface, and is the source of 40 per cent of the world's offshore oil production."

Mr Copley said the region would be of particular interest to the future security and economic viability of Australia.

It provided Australia with the single largest area for resources exports, a growing proportion of its food production, frontage to the most significant and challenged of its maritime trading routes and the potential to gain a greater foothold in the resources of the oceans, he said.

"It is also an avenue to its access to, and control of, the Southern Ocean and Australian Antarctica, regions of great geopolitical and resource importance to Australia's future," he said.

"Australia's economic well-being and its regional interaction are now overwhelmingly dependent on the Indian Ocean theatre and on the world which Australia must access, mainly via that ocean."

Mr Copley said for the first time in about 500 years, the keys to the Indian Ocean were held by the regional states, despite the fact that the ocean had become the most concentrated complex of trade routes critical to the survival of all major world economies.

There were now more out-of-region powers with combatant forces in the Indian Ocean than possibly at any time in its history, but despite this, local states had begun to assert themselves.

The study reached a number of conclusions not raised in the past.

Its five principal conclusions were that Australia must:

- take the lead in creating an Indian Ocean forum based in Perth;

- engage more decisively in the region;

- take charge of the future of Antarctica;

- focus on "pre-emptive peacekeeping; and

Mr Copley said the time had come for Australia to focus on the Indian Ocean as its great new frontier and to take advantage of it.

"What will soon be seen as a global scramble for the Indian Ocean is now under way, and Australia is at the heart of it," he said.

Major-General Jeffery said as the world faced a deepening recessionary cycle, Australia had a unique opportunity to take a leadership role in encouraging trade in the region while securing its important strategic long-term national interests.