Advances in technology are providing choice for people living with disability. 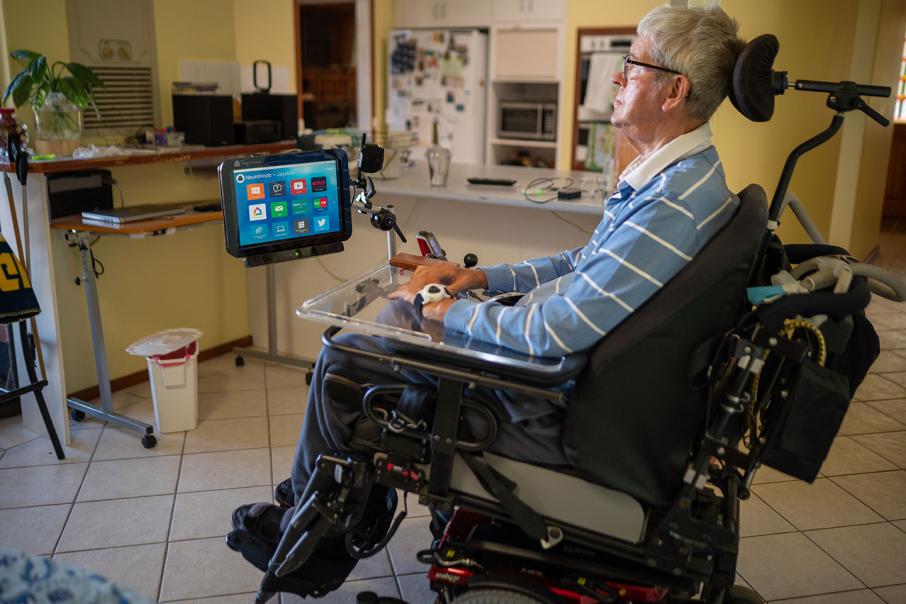 PETER Hopps is excited to be testing a ‘new toy’ from his wheelchair in the dining room of his Wembley home.

The 69-year-old chartered accountant recently acquired a custom-made tablet he can operate by moving his eyes, thanks to its NeuroNode Trilogy system by Control Bionics.

The US-based company listed on the ASX in December 2020 and has an estimated market value of more than $50 million.

It’s a progressive condition. Mr Hopps now uses a wheelchair for mobility, has 24-hour care and needs a respirator to help breathe. However, he still has enough movement in his hands to use a small panel mounted on the side of the chair, which has been modified to operate not just his wheelchair but his tablet via a small joystick and a Bluetooth connection.

As his condition progresses, he’ll no longer have the use of his fingers to operate his computer.

That’s where NeuroNode Trilogy comes in. It has three components: the eye control, touch control, and a NeuroNode sensor worn on the wrist like a watch.

When Mr Hopps rolls his wrist, the sensor uses minute muscle-signal de- tection to click on the tablet’s screen the way a mouse would.

Other clients can simply squeeze their wrist or move their eyebrow if wearing it on their head and the muscle movement will trigger the device in the same way.

“Often there is no visible movement of the muscle where the NeuroNode is placed, but it’s enough to be detected,” Mr Wong told Business News.

Mr Hopps has had the new system about two months and is one of just two Western Australians using it through Rocky Bay’s assistive technology team. He’s familiarising himself with the technology’s functions in preparation for the next phase of his disability: when his muscles deteriorate to the level where he can no longer move his fingers to control a joystick or speak, and will ultimately depend on eye-gaze technology for his independence.

Apart from the usual tablet functions like playing movies and browsing the internet, Mr Hopps can use it for everyday tasks such as answering his phone, sending an email, and turning on the lights and television.

He said he had always been interested in exploring technologies that improved the quality of life for people in wheelchairs.

“Because of the condition I have, I have little movement and it will get worse, so I am preparing for the future,” Mr Hopps said.

“I won’t have to ask someone else to turn the TV on or answer the phone or turn the lights on.

“Disability leaves you very limited in what you can do; I can’t play sport or even go anywhere on my own, so this is one of few things I can do on my own: use technology.

“The eye gaze really excites me. At first, I didn’t want it because I didn’t know what it was. But to be able to look at that screen and whatever I look at comes up, that’s amazing.”

To use the eye-gaze function, the user only has to hold their eyes on an icon – Netflix, for example – for a few seconds and it opens as if responding to a mouse click.

Mr Wong explains the tablet’s infrared dual lights shine on the eyeballs and triangulate the data to predict where the user is looking, to move the cursor that way.

“By using the two methods of NeuroNode to select and either eye gaze or the wheelchair drive switch to move the cursor, we can achieve much higher selection speeds, less fatigue and more system flexibility than traditional eye- gaze dwell systems,” Mr Wong said.

Rocky Bay speech pathologist Kayla Douthie, who works with Mr Hopps, said he was referred to her as his respiratory function and ability to speak declined.

Mr Hopps was a keen public speaker and wanted to explore speech-to-text options that would enable him to continue to write and deliver public addresses.

She said one of the best features of the NeuroNode Trilogy system was the access options it provided users.

“For people with progressive conditions it’s really nice, because there are so many ways to access it depending on how they’re feeling on the day,” Ms Douthie told Business News.

“If Peter’s eyes are tired the eye gaze may not be good, so let’s use the joystick on the control panel on his wheelchair “Or if you’re driving around and don’t want to swap out of that mode, he can use the NeuroNode on his wrist.

“It really highlights the importance of working with skilled and trained therapists who are aware of the different technology available and how we can adapt it to suit an individual’s needs as best as possible.

“Having a piece of equipment is great but, if you don’t have the therapy support to learn how to use it, it becomes useless pretty quickly.”

Control Bionics has one of its two major global research hubs in Sydney and partners with Royal North Shore Hospital and Macquarie University in NSW.

It is registered in Australia as an NDIS provider and offers users like Mr Hopps 24-hour support where technicians can take over remote control of his system to solve any issues.

In addition to those two units currently in use, Rocky Bay has a trial unit for clients to test.