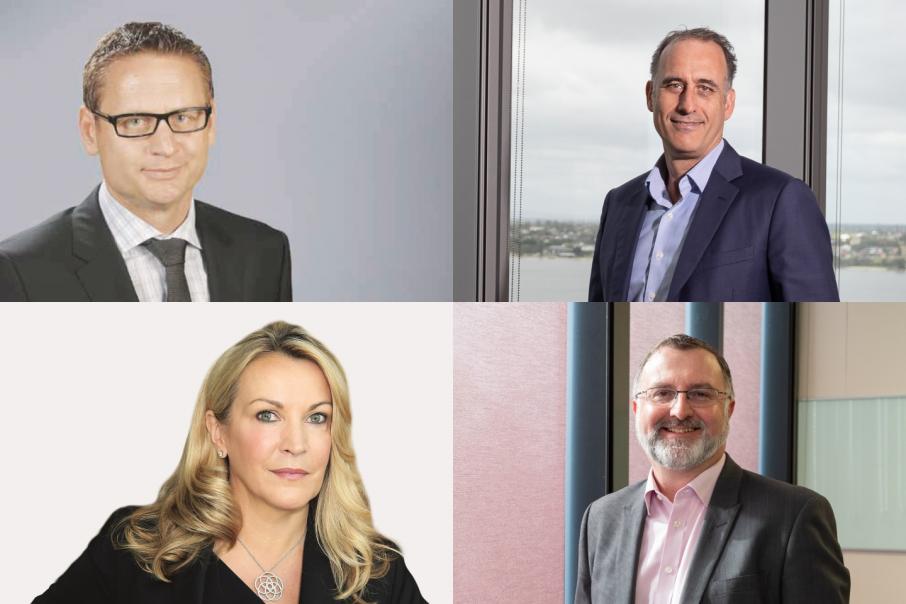 The ravages of COVID-19 have done little to dent the incomes of chief executives in Western Australia.

That’s up from 80 last year and one of the highest totals since the survey started 10 years ago.

This group included 27 people with a base salary of more than $1 million.

More than a dozen people had annual bonuses in excess of $500,000, and many executives got a big boost from long-term incentives, such as share options and performance shares.

In practice, the actual value of these incentives can be very different from their estimated up-front value, as discussed on.

Mr Testrow’s total remuneration was even higher in FY19, when he benefitted from both a higher annual bonus and larger equity incentives.

His remuneration largely reflects the value of equity incentives awarded when Emeco was undertaking a major restructure and completing two acquisitions.

Emeco’s current remuneration policy specifies that incentives awarded to Mr Testrow can be no more than 200 per cent of his annual fixed remuneration.

With a base salary of $1.1 million, that means his incentives are capped at about $2.1 million.

However, the company also noted that the ultimate value of long-term incentive awards was determined by the Emeco share price once the rights had vested and were converted into shares. 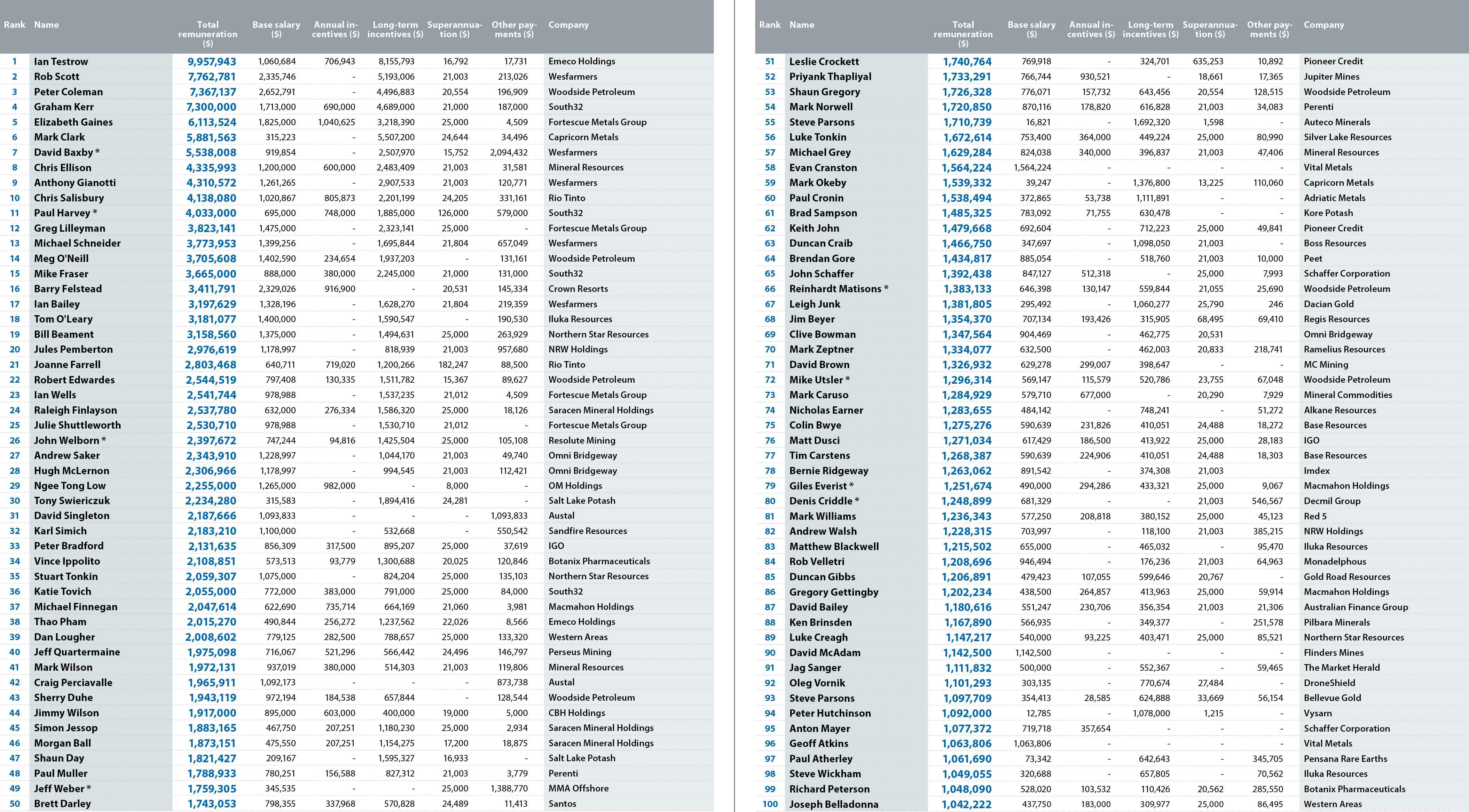 The top end of the list is dominated by the state’s largest companies.

Wesfarmers managing director Rob Scott increased his total income to $7.7 million, helped by a jump in the value of his long-term equity incentives.

He was one of five Wesfarmers executives to have annual remuneration above $3 million, according to disclosures in its annual report.

It was a similar story at other big companies such as Woodside Petroleum, South32 and Fortescue Metals Group, all of which had several executives earning $2 million or more.

Woodside boss Peter Coleman had total income of $7.4 million (he is invariably one of WA’s highest paid executives).

South32 chief executive Graham Kerr was not far behind with total income of $7.3 million.

Those four chief executives are almost assured of being listed among the state’s highest earners, because they start with high fixed remuneration.

Mr Coleman’s base salary last financial year was $2.6 million, the highest in the state.

The incentives awarded to chief executives – both annual and long-term – are typically set as a multiple of fixed remuneration.

That means executives with a high fixed remuneration have a head start when it comes to getting big bonuses.

However, that pattern does not always hold.

Mineral Resources managing director Chris Ellison increased his total remuneration to $4.3 million despite a cut in his base pay from $1.5 million to $1.2 million.

This was offset by a big increase in the value of his long-term equity incentives, topped up by a $600,000 cash bonus.

Northern Star Resources executive chairman Bill Beament, who has overseen profitable growth in the goldminer’s operations, moved in the opposite direction.

His base salary nearly doubled last financial year to $1.4 million

Mr Beament also lifted his annual performance bonus from zero to $490,000, but saw a big decline in his long-term incentives, meaning his total remuneration barely changed. 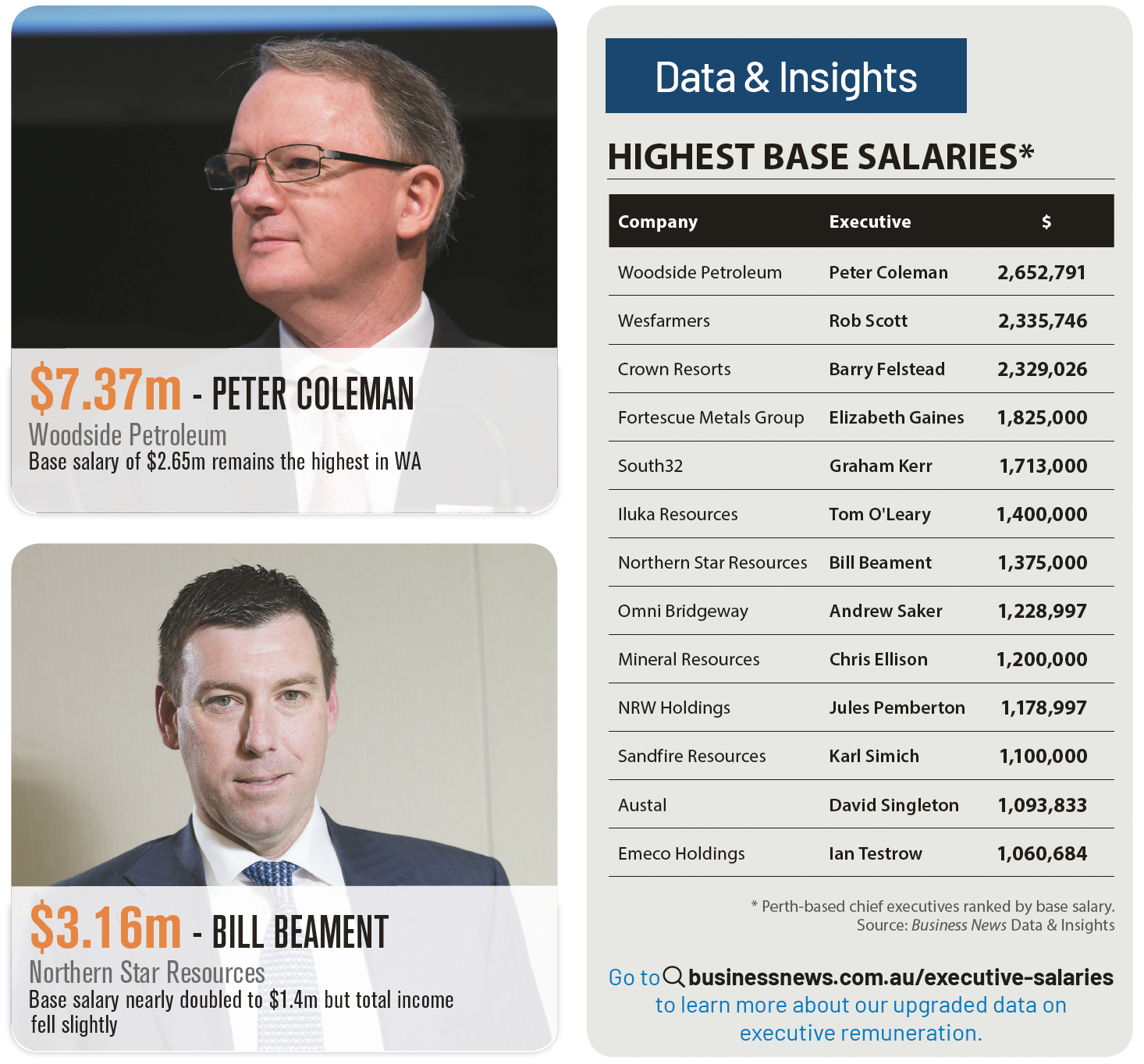 While WA is home to plenty of well-paid executives, some of their counterparts in the eastern states have done much better.

He has a modest base salary of about $320,000, but the value of his equity incentives lifted his total remuneration to an extraordinary $31.6 million.

The country’s highest-paid chief executive was Paul Perreault, who divides his time between Australia and the US while running global biotech company CSL.

His total remuneration was $16.2 million.

This salary survey is composed primarily of executives at WA-based listed companies.

It also includes a handful of Perth-based executives employed by companies based elsewhere, including Rio Tinto, Crown Resorts and Santos.

Chris Salisbury and Joanne Farrell were Rio Tinto’s top Perth executives during the year to December 2019, the company’s most recent reporting period.

They were also among the state’s highest earners.

Mr Salisbury, who ran Rio’s iron ore division before leaving earlier this year in the wake of the Juukan Gorge controversy, was paid $US2.9 million ($A4.1 million).

Rio’s biggest competitor, BHP, did not disclose the remuneration of its top Perth-based executive, Edgar Basto.

Mr Basto is likely to be included in that list next year, since he has been promoted from head of the WA-focused iron ore division to a position running Australian minerals.

Its top Perth-based executive is vice-president offshore Brett Darley, whose total remuneration was $US1.2 million ($A1.7 million).

Another interstate company with a strong Perth connection is Crown Resorts.

Its chief executive Australian Resorts, Barry Felstead, who is based in Perth, was paid $2.87 million for the year to June 2020.

The most notable aspect of his remuneration package was the high base salary.

Despite that, he was paid an unusually high base salary of $2.2 million.

Only two other Perth executives, Woodside’s Mr Coleman and Wesfarmers’ Mr Scott, had a higher base salary (see table).

To provide further context, Michael Schneider, who runs Wesfarmers’ highly profitable Bunnings division, has a much lower base salary at $1.4 million.

Mr Felstead will be retiring from Crown at the end of 2020 after becoming mired in the NSW inquiry into the company’s suitability to hold a gaming licence.

CBH Group chief executive Jimmy Wilson is the only executive included in the survey whose employer is not an ASX-listed company.

That’s because the farmer-owned cooperative is one of the few unlisted businesses that details the remuneration of its chief executive.

Like many other senior executives, Mr Wilson’s package includes potential for an annual bonus that is equal to his fixed remuneration.

The survey shines a light on chief executives who are assured of getting a high income each year.

These include the chief executives at several mid-cap companies, such as litigation funder Omni Bridgeway, contractor NRW Holdings, and miner Sandfire Resources.

Omni’s Perth-based chief, Andrew Saker, had a base salary of $1.2 million last year.

Add in share performance rights and his total income jumped to $2.3 million.

His fellow director, Hugh McLernon, had essentially the same remuneration.

NRW boss Jules Pemberton had a base salary of $1.2 million.

By comparison, his counterpart at contractor Monadelphous Group, Rob Vellettri, had a lower base salary at $946,000 and a much lower total at $1.2 million.

With a high base salary ($1.1 million), a large annual bonus and a long-term equity incentive, his total remuneration was $2.1 million.

The most notable example this year was Capricorn Metals executive chairman Mark Clark, whose total remuneration was $5.8 million.

Nearly all of this ($5.5 million) was the value attributed to share options issued to Mr Clark, who joined the company in July last year.

To put this in context, it’s instructive to break down the package.

Mr Clark, who previously led successful miners Equigold and Regis Resources, was hired by Capricorn to lead the development of its Karlawinda goldmine.

He is paid a base salary of $375,000, which is fairly common for small to mid-cap companies.

When he joined the company, he made a large personal investment, subscribing for $4.5 million worth of shares.

That was at 6.5 cents each, a 25 per cent discount to the prevailing share price.

Mr Clark was also issued 40 million options with an exercise price of 12 cents, meaning the share price had to rise substantially before they were ‘in the money’.

After a five-for-one share consolidation, he ended up with 8 million options with an exercise price of 60 cents each.

With the shares currently trading around $1.70, they are well and truly ‘in the money’, hence the large valuation in the June 2020 annual report.

His base salary was similar to that of Mr Clark ($315,000) while he also received share-based payments, valued at $1.9 million, lifting his total remuneration to $2.2 million.

Botanix Pharmaceuticals showed that it’s not just junior miners that can deliver big returns to their top executives.

Its US-based executive chairman, Vince Ippolito, had a base salary of $573,000, relatively high for a company with a market value of only about $120 million. 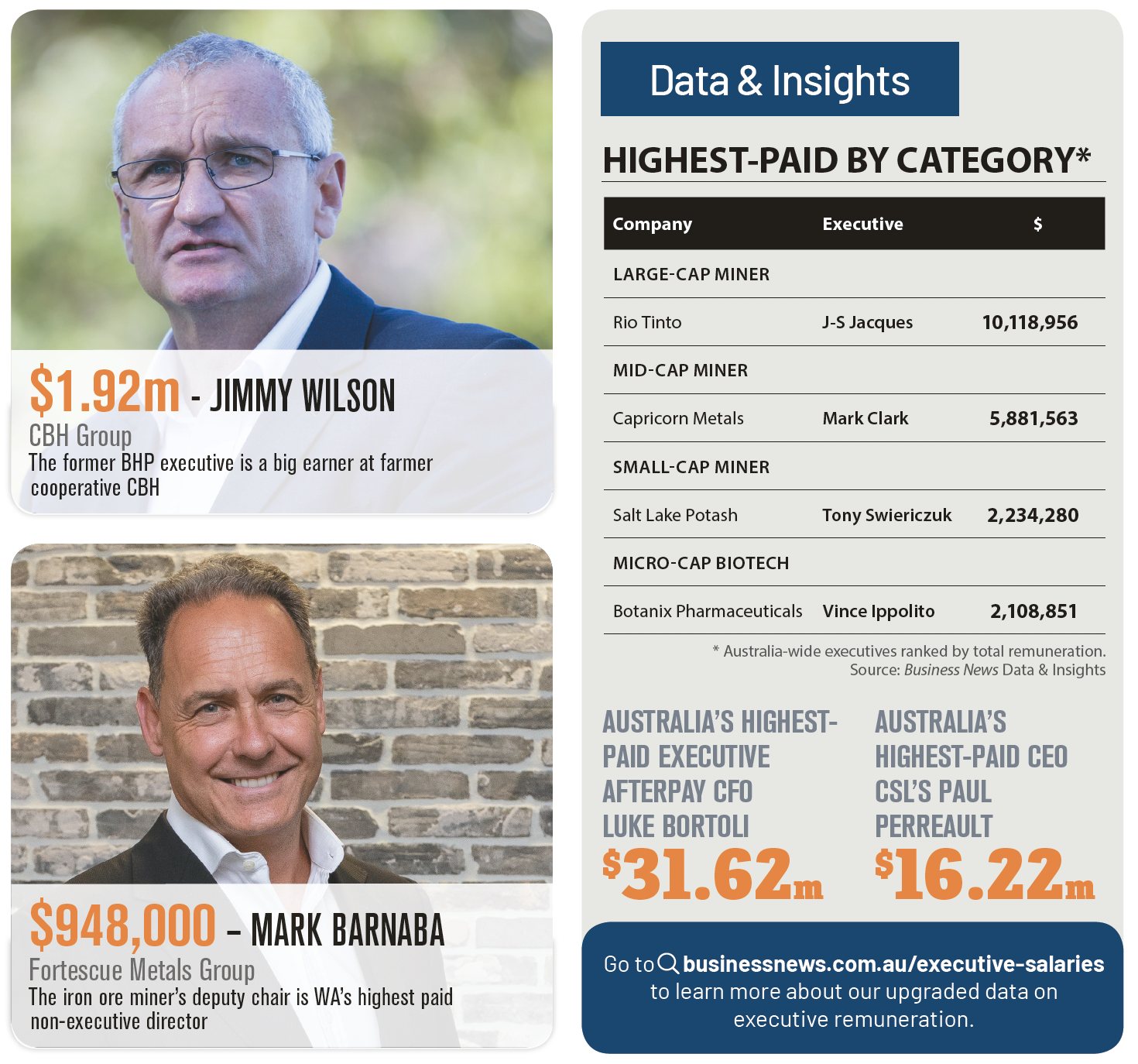 The directors of WA’s big listed companies earned more last year than most people earn from their full-time job.

His income will be higher again in the current financial year after the board agreed to increase his fees to $1.1 million.

Fortescue noted that Mr Forrest does not get paid a fee for his role as chairman.