During 2016 many high profile enterprises (including the ATO and the ASX) suffered significant outages of critical IT services. These have been widely reported in the media, with some causing extended and severe disruption to businesses, the public and entire industry sectors.

The ATO suffered a disk storage failure on the 12th December 2016 bringing down several online systems used by the wider taxation industry. Four days later, with services still not fully restored, the Commissioner of Taxation made the following media statement: “Earlier this week, the ATO suffered its worst unplanned system outage in recent memory … What compounded the problem … was the subsequent failure of our back-up arrangements to work as planned”. (ATO, 1). During the ensuing weeks, services operated sporadically with reduced functionality and performance as the ATO attempted to fully recover services. These outages frustrated and disrupted the entire taxation industry over an extended 8-week period.

Similarly, the ASX experienced a hardware failure on the 19th September 2016 that delayed the opening of the market to 11:30am and caused an early closure at 2:05pm. The Disaster Recovery (DR) strategy failed to successfully recover services and a report into the outage stated: “On Monday an unprecedented hardware malfunction triggered a complete database failover to DRS (Disaster Recovery Site) and not all parts of ASX Trade successfully connected to the DRS database.” (ASX, 2).

Failure to quickly and effectively recover critical IT services isn’t unique to the ATO and ASX. In a global survey covering 243 organisations, 40% admitted that their DR plan did not work in an actual disaster. (The Disaster Recovery Preparedness Council, 1). Even more concerning is that industry observers estimate that 50% of organisations have inadequate DR and may not survive a significant outage of critical IT services. (IDC, 3).

Enterprises such as the ATO and ASX invest heavily in building IT resiliency and DR capability, yet these investments seemingly fail to cope with relatively mundane and expected outages such as hardware failures. If large enterprises are having difficulty, what hope is there for SMBs that can only afford considerably lower levels of investment?

Today’s dynamic business environments increasingly depend on IT services that are expected to be “always on” and available. This together with the insatiable desire for new or improved services, is driving an increase in IT complexity and an increase in the rate of change that IT needs to cope with.  Organisations that rely on a traditional approach to DR (using backup datacentres and mirrored hardware) are finding it increasingly costly and challenging to develop effective recovery strategies, maintain configuration consistency between datacentres (a requirement for effective recovery of services), and to perform comprehensive testing of DR strategies.

How can Disaster Recovery as a Service address these issues?

Cloud DRaaS is gaining popularity because it offers a convenient and cost-effective alternative to traditional DR while better coping with the complexities of today’s IT environments.  Market and Markets predicts DRaaS is estimated to grow to US$11B by 2021. (Market and Markets, 4).

It addresses many of the cost and complexity issues that have always existed with traditional DR approaches but that are more prevalent with today’s dynamic business environments. 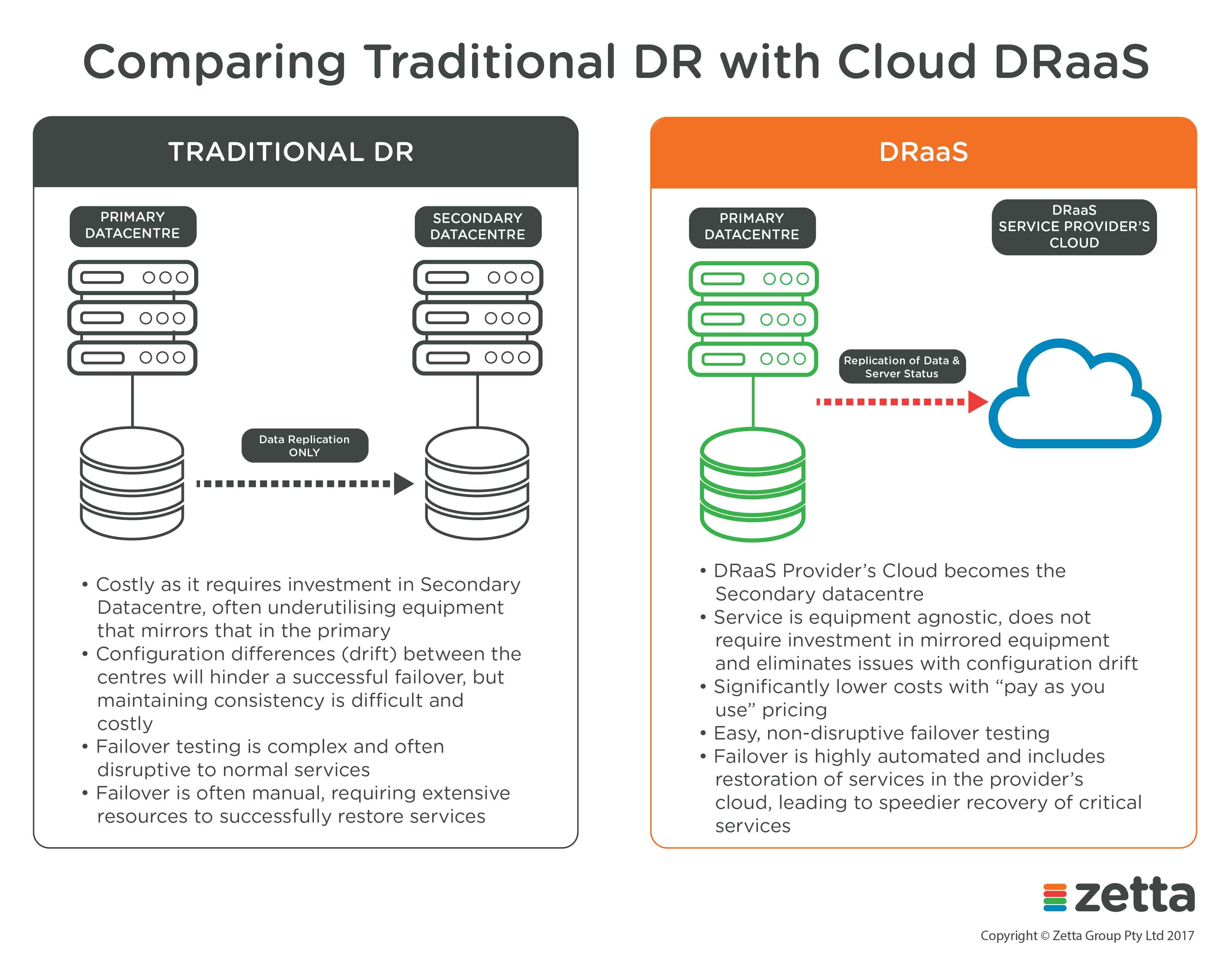 DRaaS removes the requirement for a second datacentre and mirrored equipment because the DRaaS provider’s cloud service is leveraged. In the event of an outage of IT services in the primary centre, is its relatively easy to failover and utilise the providers cloud to maintain critical IT services.

Key features of DRaaS include lower cost and “pay as you use” pricing models thus avoiding capital outlays, quick and easy implementation, easy and non-disruptive failover testing, an ability to configure low Recovery Time Objectives (RTO) and Recovery Point Objectives (RPO), and the ability to quickly failback to a primary centre once the initial fault is rectified.

DRaaS allows organisations to spend less time and dollars dealing with configuration and other technical issues while providing greater flexibility and agility in securing critical IT services. The ability to test often and without disruption to normal IT services boosts overall confidence in recovery strategies.

While not a panacea for all requirements, DRaaS may be all that SMBs require to protect critical IT services, and form all or part of a solution for larger enterprises.

If you would like more information about how DRaaS can protect your business, please see Zetta Disaster Recovery as a Service

4. Markets and Markets. “Disaster Recovery as a Service Market”, 2015, http://www.marketsandmarkets.com/PressReleases/recovery-as-a-service.asp.