Immersed in mine simulation 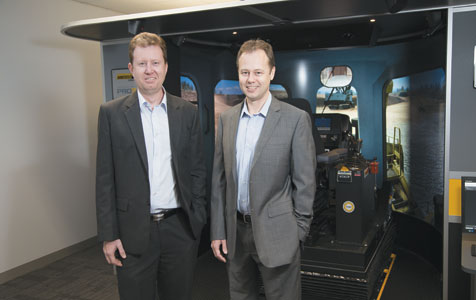 How do you teach people to drive a driverless truck? That is a question the team at Immersive Technologies has been grappling with, and the answer has provided a new business opportunity for the Osborne Park company.

Immersive is a global leader in the development of training simulators for the mining industry.

Its products are used by operators in underground coal mines and gold mines, and open pit iron ore mines, among others.

But its newest products take the concept of simulator-based training to a new level.

Its IM360 simulator, launched in March, allows trainees to freely walk around their ‘mine site’, identify risks in a 360-degree environment, and practice responding to emergency evacuations.

And when they are seated, the trainees feel the movement they would experience in a real machine, such as rapid jolts, acceleration and vibration.

Immersive’s newest product, launched this month, is a training package designed to suit autonomous equipment, of the kind that Rio Tinto has pioneered with its ‘mine of the future’.

Rio has been joined by many of its peers, including BHP Billiton and Fortescue Metals Group, in what the industry regards as a potential game changer that could substantially boost efficiency.

Chile’s state-owned copper miner, Codelco, has also gone down this path, ordering a fleet of Komatsu driverless trucks in 2008.

It has worked with Immersive to develop a training package suited to the new technology, and avoids problems that have occurred elsewhere.

He has heard of trainees retaining as little as 15 per cent of what they are taught.

The package Immersive developed for Codelco combines computer-based training, virtual classroom and simulator training to prepare staff to operate the heavy equipment from a remote location.

Immersive chief executive and co-founder Peter Salfinger believes this is a world first.

“Our passion to innovate with projects like the autonomous mining training centre in Chile is fundamental to our company’s success and ability to remain viable in a technology driven industry,” he said.

“We’ve spent more than 20 years solidifying our reputation as the recognised global leader in mining simulation and are proud that our technology is becoming known as a best practice industry wide.”

With 255 customers in 36 countries – Kazakhstan became number 36 when a new client signed up last week – Immersive has a good feel for industry trends.

Mr Salfinger said some regions were becoming more cost conscious and focused on productivity and profitability, while others were concentrating on ‘green’ operator training and workforce development.

“We are fortunate our solutions are developed to address all ends of the spectrum,” he said.

Immersive’s strong market presence is reflected in the alliances it holds with manufacturers Caterpillar Global Mining, Hitachi Construction Machinery, Komatsu and Liebherr, all of which supply proprietary information critical to Immersive’s product development.

A milestone last year was the placing of the largest training simulator order in mining history.

Another milestone last year was the company’s first sale to Norilsk Nickel in Russia.

The means Immersive now counts nine of the 10 top global mining companies (as ranked by Forbes) among its customer ranks.

Not bad for a privately owned company in Osborne Park.