Iluka plans to commence mining and production activities by the firs quarter of 2010, with the project expected to produce 6 million tonnes of Heavy Mineral Concentrate, incorporating around 2.9 million tonnes of zircon.

This news comes as the mineral sands producer announced it has maintained its earnings forecast for the 2007/08 fiscal year of between $10 million and $20 million.

Shareholders will vote at the annual general meeting today on the re-election of two directors, Jenny Seabrook and Donald Morley, while the company's chairman Ian Mackenzie and non executive directors Valerie Davies and Grahame Campbell, will retire.

Iluka plans to ultimately shave its board of ten directors down to five.

Iluka Resources Limited ("Iluka") yesterday approved development of the Jacinth-Ambrosia mineral sands project, located in the Eucla Basin of South Australia, approximately 200 kilometres North West of Ceduna.
The Board of Iluka has approved project capital expenditure of up to $420 million, which includes funding previously approved and announced in March 2008 for early initial engineering and procurement of certain long lead items.
When developed, Jacinth-Ambrosia will represent a globally significant, long life source of zircon. It is expected to produce an estimated 6 million tonnes of Heavy Mineral Concentrate ("HMC"), incorporating approximately 2.9 million tonnes of zircon, plus associated rutile and ilmenite production streams.
Subject to the necessary regulatory approvals, Iluka plans to commence mining and production activities and ship HMC from South Australia by the first quarter in 2010. The HMC is planned to be processed at Iluka's Narngulu minerals separation facilities at Geraldton, Western Australia, with first product expected to be available for sale in the second half of 2010.
David Robb, Iluka's Managing Director stated: "The commitment to the Jacinth-Ambrosia project, in combination with the Murray Basin Stage 2 development, represents the major part of rebuilding Iluka's production platform to capitalise on increasingly favourable industry dynamics. I believe we are on the threshold of a new era for our industry, driven by the forces of growth and urbanisation in emerging economies - most particularly China. Demand for the products Iluka produces is strengthening at a time when we are preparing to bring on high quality, long life new zircon and rutile production sources. When added to our advantageous geographical position, a tremendous opportunity lies ahead."
"Jacinth-Ambrosia and Murray Basin Stage 2 are expected to consolidate Iluka's market leadership position in zircon and rutile and to be the major contributors, along with Iluka's continuing interest in the Mining Area C iron ore royalty stream, to improved earnings and cash flow."
"While both are large projects, we believe delivery risk is manageable, subject to timely regulatory and other external approvals, given we are using conventional mineral sands mining and processing approaches and we are leveraging existing assets - reusing a concentrator from our US operations and expanding existing Iluka separation plants at Hamilton and Narngulu," Mr Robb said.
The Jacinth-Ambrosia deposits are expected to produce an estimated 2.9 million tonnes of recoverable zircon over their estimated life from first production in 2010 until expected depletion at the end of 2020. Annual production of approximately 300,000 tonnes of zircon from the Jacinth deposit is expected to be sustained from the first full year of operation in 2011 until 2015 based on current mine plans.

Iluka is confident that further discoveries within its as yet lightly explored tenement holding of over 52,000 square kilometres, have the potential to supplement current zircon production plans and extend mineral sands production from the Eucla Basin well beyond 2020.
Murray Basin Stage 2 is planned to commission and commence initial production in the first quarter of 2009, subject to timely regulatory approvals. Planned production from Stage 2 is expected to increase total Murray Basin production to an average level of 330,000 tonnes per annum of rutile and zircon over the period 2009 to 2012 inclusive, compared with the 2007 production level of approximately 185,000 tonnes. On the basis of current mine plans, the Murray Basin is expected to have an economic life to at least 2023.
"Apart from effective project execution, the major focus will be on bringing new production into the market in a manner which optimises margin capture across Iluka's total production base and therefore maximises financial outcomes for the benefit of Iluka shareholders. I believe there are a number of new approaches and initiatives we can bring to bear to further penetrate growth markets and secure new customers while growing with, and enhancing our offer to, our existing customers. For example, Iluka is the largest single supplier of zircon into China, but we are actually under weight in China relative to our market shares in more mature markets. While our sales growth plans are important, they are backed by a clear assessment of the pricing and volume tradeoffs which we need to make to achieve the return outcomes we seek", Mr. Robb said.
"When commissioned, Jacinth-Ambrosia will have been developed, in a remote region of South Australia, and a major expansion of the Narngulu separation facility will have been completed in Western Australia, in a period of less than six years from first discovery of the resource. In looking forward to this achievement, Iluka acknowledges the strong level of support provided by the Governments of South Australia and Western Australia and their agencies, by the Ceduna Shire Council and, crucially, by the people of the Far West Coast Aboriginal community," Mr Robb said. 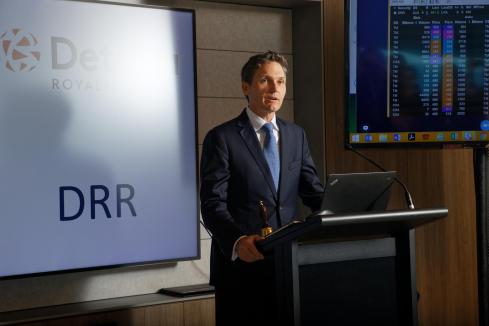