Choosing healthier food choices and finding the time to exercise can have significant effects on workplace productivity, as two Perth business executives discovered. 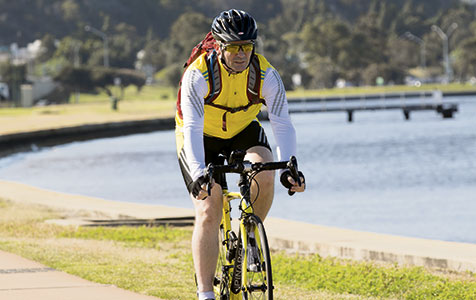 Long work hours, high stress levels and minimal physical activity are part of the deal for those choosing a career in corporate finance, and it’s a contract Clinton Bradbury signed up for with minimal thought as to the long-term health impacts.

Just a year ago, the founder of the West Australian Corporate Acquisition Register (WACAR) tipped the scales at more than 115 kilograms.

Not only was Mr Bradbury overweight, he also had a long list of health issues that had arisen after leading a lifestyle in which food served just one purpose – convenience.

“My eating regime, I would simply say, was devoid of control; I simply thought that I could eat whatever I felt like eating and that was fine. I did not appreciate the health consequences of such a high-fat diet.”

The crunch came when Mr Bradbury was diagnosed with fatty liver disease – forcing him to reassess his lifestyle.

“How could I actually be performing at my peak performance with a body that was carrying far too much weight and with a diet that certainly didn’t speak of good nutrition,” Mr Bradbury says.

The doctor’s diagnosis shocked Mr Bradbury into action, and after just four months of switching his high-fat vices to healthier alternatives the extra weight dropped off – 31kg of it – which resulted in significant improvements at work.

“As my weight dropped I absolutely experienced improved sharpness; I felt quicker … I had a lot clearer perspective and clearer judgement and a greater ability to work better and carry and deliver a better workload,” he says.

“Certainly when you are at your peak fitness you are going to deliver better results for the client as opposed to having 31 kilos hanging off the midriff; (with that) you cannot deliver peak performance for the client.”

While Mr Bradbury openly describes himself as a food addict, he says the high-pressure corporate environment does nothing to facilitate a healthy lifestyle.

“There is high pressure there and there is expectation. I wanted to deliver the best possible outcome for a client,” he says.

“People equate time at the desk as delivering peak performance, but really it’s about the efficiency.”

Mr Bradbury says employers can make a difference by giving workers the time needed to get exercise in during the day and instilling a culture that incorporates enthusiasm for health and fitness.

From Geoff Rasmussen’s perspective, employers can make the biggest impact by educating workers about healthy food and lifestyle choices.

Mr Rasmussen, who is managing director at Azure Capital, has had a long struggle with obesity; yet it wasn’t until he tipped the scales at 156kg that he decided to take action, entering the 2012 Youth Focus Ride for Youth.

Since then he’s lost 45kg and is now training for the Busselton Iron Man in December.

Mr Rasmussen says his obesity wasn’t a direct result of his corporate career, but the job’s sedentary aspect didn’t help.

“I used food to take a break at work; I’d be powering away and then get up and go to the kitchen when I wasn’t even hungry – it was just a form of a break, so I’ve had to break a lot of habits.”

Mr Rasmussen says he’s also addicted to food, and even after more than two years on a diet is still struggling to curb the urge to overindulge.

The iron man event is his motivation for staying focused, as the fear of failure is not something Mr Rasmussen cares to contemplate.

After the December 8 race, however, he knows he’ll have to find another way to remain on track.

“The big risk for me is that this phase finishes and I get back to bad habits, and I can get back to them instantly, it’s easy,” Mr Rasmussen says.

“Once you’re a food addict you’ll always be a food addict; it’s like being a boozer or a druggie – whatever that character flaw is, it’s there permanently. So the challenge for me is, when I’m done with this iron man stuff, how do I manage it?”

Mr Rasmussen says the education he’s gained through the dieting process has been invaluable, because his knowledge of nutrition was so poor previously.

“We are all victims of not being educated properly through our childhood on dietary and exercise issues,” he says.

“I, as a 42 year old, never really understood how many calories I should eat – it just wasn’t part of my basic education.”

And that’s where Mr Rasmussen says employers can play a vital role.

“Employers, for their own selfish reasons – because (healthy employees) does speak to productivity – should be making sure that that education is available,” he says.

“But (employers) can use it as part of retention as well. I think if you demonstrate to your employees that you care about them and you’re worried about your wellbeing it’s a subtle retention tool.”