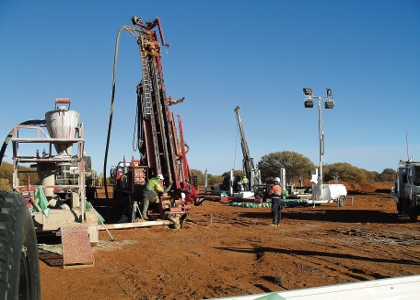 There has been a small burst of activity in the flagging new floats sector, with three Western Australian firms completing initial public offers this week, raising more than $25 million collectively.

Enterprise Uranium was admitted to the ASX official list today, after its IPO raised $5.1 million at an issue price of 20 cents.

The company will use the funds to explore a suite of uranium deposits across the state.

Meanwhile, Paringa Resources was admitted to the official ASX list today, after raising $10 million at an offer price of 30 cents.

The company’s flagship asset is the Minacu gold project in central Brazil.

Paringa is planning a two-phase, two-year exploration program to define a significant gold resource at the project.

Finally, Cott Oil and Gas raised $6 million though its initial public offering, and plans to list on the Australian Securities Exchange early next year.

The Perth-based exploration firm said the proceeds from the IPO, which was priced at 20 cents per share, would be used to fund a two-year exploration program at is Carnarvon Basin and Papua New Guinea oil and gas permits.

Following completion of the IPO, Cott said it would have a market capitalisation of around $13.3 million.

“With the proceeds from our successful IPO, we are now able to advance in our dual Carnarvon Basin and Papua New Guinea areas of focus, while being well positioned to benefit from other opportunities that may arise,” chairman Stephen Dennis said.

Cott holds a suite of oil and gas opportunities across the Westralian Superbasin, off the north west coast of the state, as well as portfolio of under-explored onshore targets in Papua New Guinea in partnership with PNG parter Kina Petroleum.

At close of trade today, Enterprise Uranium shares lost 1 cent, to finish at 19 cents, while Paringa’s stock was down 3 cents, at 27 cents.

This year has been a challenging environment for new floats, with just 36 IPOs launched in Australia to the end of November. In western Australia, there were 17 new floats this financial year, bringing the number of WA-based ASX-listed firms to 897.

The firms raised a total of $821 million, down 29 per cent compared to calendar 2011, Ernst & Young research said.

Globally, IPOs were down 30 per cent in value compared to 2011, the research said.