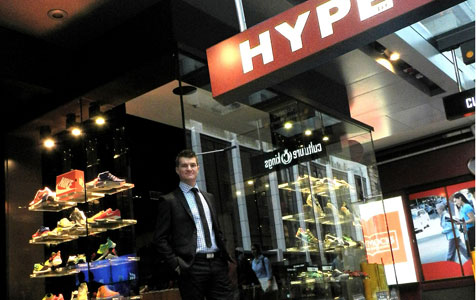 Sneaker retailer Hype DC will open a new flagship store at the entrance to Carillon City, which is emerging as a location of choice for national and international fashion retailers.

Mr Olde said interest in Perth CBD retail properties was on the increase, following a challenging year in 2013.

“We’ve got a lot of interest at the moment, it’s not difficult to find initial leads,” Mr Olde told Business News.

“Finalising a deal is always tough, as it always is, but generating interest seems to be a lot easier than it was in 2013.

“Retailers seem to have genuine intent to find sites.”

The store will be the retailer’s third flagship shop in Australia, following outlets in Melbourne and Sydney which opened recently.

Mr Olde said the Hype deal was indicative of a slew of Australian retailers opening new stores in the Perth CBD, at the same time that international retailers such as Top Shop and Zara were attracting headlines.

The transaction follows Politix signing up for space across the mall at enex100 and Cotton On signing a new lease agreement at 140 William Street, while Mr Olde said Lorna Jane was also actively seeking a new CBD outlet.

“These are all Australian retailers and they’re all really good at their game,” he said.

“Retailers that have been doing the same thing for the past 10-15 years, that’s the sort of retailers that are struggling.

"They can’t afford the rents on the malls and they are just dropping by the wayside.”

Mr Olde said Hype’s basement store in the Murray Street mall was a good example of a retailer creating a destination for shoppers, rather than simply a transactional experience.

“Hype DC is not just a shoe shop, it’s something else,” he said.

“When people go into Hype DC they are not just buying a practical pair of shoes to go running in.

“They are looking for something else, and that’s experiential retail, and that’s why people come to the CBD to go shopping.

“People come to the CBD for a shopping experience that has some wow to it, and when retailers go to great effort to create experiential stores, it’s a pleasure to work with them.

“Describing a concept like this to a landlord is more than just adding up the financials and negotiating a result that is equitable for all parties.”