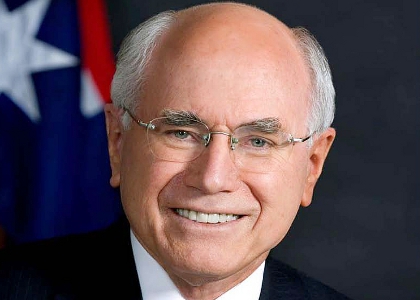 Never-ending resource demand from China and permanent public support for action on climate change are two of the things former prime minister John Howard warned should not be assumed when he addressed a resources industry crowd in Perth today.

Preserving perspective was the most important lesson Mr Howard said he learnt during his 12 years as the top dog in politics, and he applied it to the current state of politics and mining for the Chamber of Minerals and Energy business lunch.

While he claimed to be agnostic when it came to whether or not climate change is genuine, he said a tax rate of $23 a tonne on carbon was ‘absurd’ and placed a damaging burden on the resources industry.

He warned that game-changing policies on climate change should be taken to with caution.

“Now of course, people are starting to raise serious questions.”

The biggest threats to the resources industry, according to Mr Howard, were bad domestic policy and industrial relations tilted too heavily towards collective bargaining.

“I accept that aspects of Work Choices – in particular the removal of the no disadvantage test – were politically foolish, but the other changes that have been made have gone far beyond reversing that, such as abolishing individual contracts, getting increased rights of entry and tilting the balance in favour of almost the exclusive reliance on collective bargaining has been very damaging,” he said.

And while he highlighted what the crowd already knew – that WA’s resources industry is experiencing strong and impressive growth – he said in order to maintain perspective on that growth, WA should not rely on indefinite trade with China and Japan.

“The world has a fascination with China at present, and once again I think it is important to keep a sense of perspective,” he said.

“When you look at the Australian economy over the last 40 to 50 years, it is fair to say that we owe more to Japan than we do to China.

“In more recent years China has overtaken Japan and in many ways it has become the best market Australia has. There is no reason that shouldn’t continue, there is a reasonable expectation that it should, but we shouldn’t lose reality when it comes to China.

“In Australia we can’t afford to assume that no matter what happens China is going to be there forever, wanting to buy our resources.”