The construction industry in Western Australia is booming. 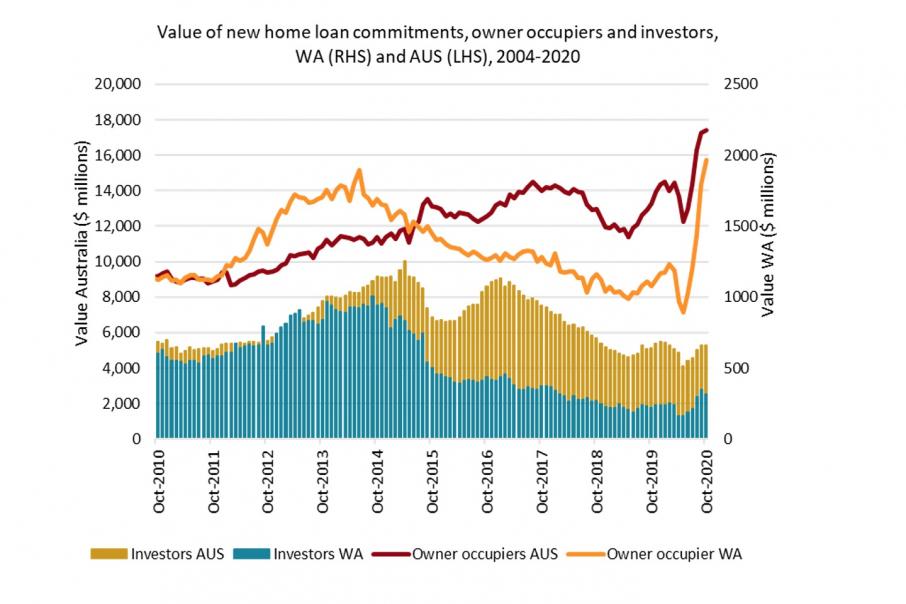 The construction industry in Western Australia is booming.

Since the announcement of the federal and state government stimulus measures, the housing sector is not looking grey anymore. Buyers have rushed into new building constructions in order to take maximum advantage of both stimulus packages.

Approvals for new dwellings have soared to levels only seen at the peak of the mining boom. In the month of October, 2,400 new dwellings were approved, more than double the June figures.

This follows back-to-back growth on monthly approvals since August, with heights of 42 per cent in September. WA’s growth rates over the past three months have been the highest of any state by far.

Investors and owner occupiers are cashing in. The value of housing finance commitments by owner occupiers has risen abruptly, with a 120 per cent increase in October relative to the 10-year low seen in May. The trajectory is also quite spectacular for investors’ loans, which have grown by 94 per cent during the same period.

This is even more remarkable if we compare to pre-COVID-19 averages. Relative to February, the value of housing loans to WA investors increased by 25 per cent in October, whereas nationally this only grew by 0.4 per cent.

Nevertheless, activity seems to be waning as, in October, the value of investors’ loans declined by 9 per cent relative to the three-year record high seen in September.

Overall, investors and owner-occupier housing loans accounted for a total of $2.3 billion in October, a record high since 2015.

The $20,000 grants to construct new homes have awoken WA investors’ appetites, as they turn their attention to new opportunities. In the four months following the announcement of the grant, loans to investors to buy residential land have increased 145 per cent relative to the previous period (3.3 times the growth rate of existing dwelling purchases).

As Perth rental vacancy rates fall below 1 per cent, investors are looking back to the housing sector again.

The best estimate on price increases in this sector is provided by the CPI of new dwelling purchases by owner occupiers. In the quarter to September, this index increased by almost 4 per cent in WA. This is the first time in five years that it has grown by more than 1 per cent in a quarter.

But is this really good news for investors?

While some of this increase is due to rising demand from the stimulus packages, a significant part comes from builders passing on increasing input cost for new project homes.

Declining trade flows as a result of the pandemic have increased base prices for building materials. Land prices have also risen, as supply cannot keep pace with demand. The skills shortages in the construction sector, amplified by border closures, have also contributed to rising prices on the supply side.

Will investors be able to take advantage of the stimulus measures without losing at the exchange in construction prices? The easing of the border to other states should help slightly, as workers from over east will be more reactive. The recent extension of the stimulus deadlines is also likely to bring price relief in the sector.