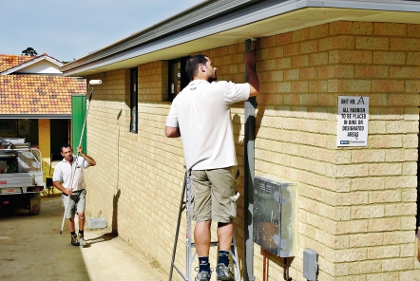 The outlook for the state's housing construction market has improved, but the expected pick-up is coming off a very low base and affordability remains a problem for households on modest incomes.

The Housing Industry Forecasting Group (HIFG) is predicting 21,000 dwelling starts this financial year, up 20 per cent on the previous period.

"We expect a healthier level of activity in the sector to continue into the following three years with residential building starts in the 20,500 to 22,500 range," HIFG chairman Stewart Darby told a breakfast briefing today.

"We've seen new house sales rising, we've seen building approvals rising, we've seen FHOG (first home owner grant) applications rising and also (higher) financial approvals, so it's all very positive signs to suggest, certainly in the second half of 2012, the market is on the way up."

The forecast pick-up in construction activity followed a slump in dwelling starts to just 17,548 in 2011-12, the lowest level in the past decade.

Mr Darby said the past year had seen the strongest non-stimulatory rise in First Home Owners Grant applications on record.

First home buyers had increased their share of total new loan approvals to 34 per cent in the three months to August, compared to the long-term average of 27 per cent since July 2000.

He said this recovery allowed existing home owners to trade up to a new home.

However, there was an undersupply of properties for first home buyers and the rental market remained tight.

Broadly, the downward trend in interest rates was not stimulating households to spend or invest but confidence was beginning to return, Mr Darby said.

"Conditions are improving, but confidence remains low," he said.

Mr Darby commented that building approvals took a 12 per cent dive in the year to June as issues with the new Building Act came into play but they are now trending strongly upwards for the first time since early 2010.

“The pipeline has been unplugged in terms of building approvals and we will see a solid upturn,” Mr Darby said.

Mr Darby also said there was overall weakness in WA's regional market, with most regions other than the Pilbara and Kimberley in a state of over-supply.

Geraldton in the state's mid-west, for example, had a year's worth of land supply, he said.

Mr Darby said previous projections of underlying housing demand may have been overstated due to changing trends in the number of occupants in the average home.

The HIFG has forecasted underlying dwelling requirement in WA to be at just under 22,000 per annum, compared with earlier estimates by other industry groups it was closer to 27,000.

The steady decline in the number of home occupants over the past century has come to a halt in recent years, according to census data.

Mr Darby said this could be attributed to Gen Y children departing the family home later than previously in the face of a tight rental market and housing affordability pressures.

Meanwhile, official data released this morning showed a rise of 7.8 per cent in residential building approvals in September.

In the year to September, building approvals were up 12.4 per cent, the Australian Bureau of Statistics said.

Economists' forecasts had centred on a 1.0 per cent rise in approvals for September.

JP Morgan economist Ben Jarman said data showed a trend of improvement in the multi-dwelling space, rather than overall growth.

"Typically when you do get a rise in building approvals it's in that category, and it's not necessarily sustainable," he said.

He added that official interest rate cuts by the Reserve Bank of Australia (RBA) did not appear to be fuelling growth in the sector.

"If you look at what's been driving building work lower over the past 18 months or so, it's not been the tightness of monetary policy, but the structural impediments to new building work," he said.

CommSec economist Savanth Sebastian said there are healthy signs for the housing sector after a lacklustre 18 months.

"There are signs of a turnaround in housing activity," he said.

"It is good news for an economy where the mining sector is driving activity in the west but on the eastern seaboard it really comes down to the housing sector being a big driver for growth over the next couple of years."

Mr Sebastian said there are sign that the May and June interest rate cuts by the central bank are finally starting to kick in.

"We've always known that rate cuts take some time to filter through the economy, there's been a lot of anecdotal evidence that potential home buyers are doing the calculations and looking at purchasing property," he said.

Mr Sebastian is expecting the Reserve Bank of Australian to cut the cash rate one more time this year, after most recently cutting it in October, by a quarter of a percentage point to 3.25 per cent.

"It's clear that confidence is starting to pick up off a low base," he said.

"The likelihood of a November rate cut can't be ruled out. We don't expect them to be cutting over the next (calendar) year, there is just one rate cut left before the rate is left on hold for an extended period of time."