Solid gains in building approvals in 2013 are expected to flow through to the housing construction numbers in coming quarters. 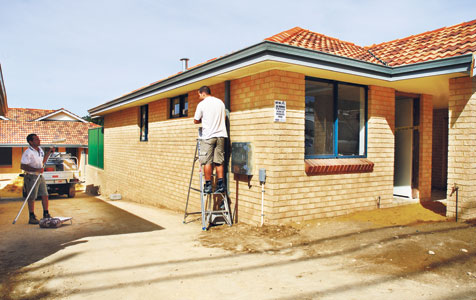 The recovery in the residential construction sector has been highlighted by three sets of data released this month, though the data also show that Western Australia is lagging some other states.

CommSec economist Savanth Sebastian said the housing sector had become the ‘shining light’ of the Australian economy in recent months.

Mr Sebastian’s comment followed the released of data showing the number of new owner-occupier housing loans rose by 1.1 per cent in November, the 10th increase in the past 11 months.

As a result, housing finance commitments were up 15.3 per cent on a year ago.

“While the rise in overall housing finance is positive, the key is the new home building market and the increase in construction loans is the jewel in the crown,” Mr Sebastian said.

“Loans to build new homes have risen for 10 out of the past 12 months and are up almost 17 per cent on a year ago.”

The pattern varied considerably across states, with the number of new owner-occupier housing loans rising by a more modest 12.2 per cent in WA but a high 22.7 per cent in NSW (see chart).

Mr Sebastian noted that the proportion of first home buyers in the market fell to a record low of 12.3 per cent in November, and remains well below the long-term average of 20 per cent.

“There is anecdotal evidence that some first home buyers are being squeezed out by investors, given tight housing supply,” he said.

“But the lower numbers of first home buyers also reflects the preference for young people to rent, rather than buy.”

The monthly jump meant new home sales were up 29.2 per cent on a year ago.

Within this total, detached house sales rose by just 3.6 per cent while multi-unit sales surged by 30.5 per cent.

Building approvals data highlighted the strength of the apartment market, despite a dip in the most recent monthly figures.

Total building approvals fell by 1.5 per cent in November but were 22.2 per cent higher over the year.

House approvals also lifted in 2013, but not by as much as apartments. The strong rise in house approvals in November indicates the momentum building in the sector.

The major contributors to approvals growth in 2013 were in NSW and WA, the states with the largest amount of residential underbuilding during recent years.

HSBC chief economist Paul Bloxham said the rise in building approvals over the year was expected to start to flow through to the housing construction numbers and support GDP growth in coming quarters.

“The longer lag than usual between the rise in approvals and a pick-up in construction may reflect that much of the growth in approvals over the past year has been in medium-density dwellings (including apartments) which generally take longer to complete than detached houses,” he said.