Housing bubble or not, negative gearing should stay

Standfirst: The IMF and Reserve Bank have urged reform of housing taxes but we should tackle this in a broader context of tax reform. 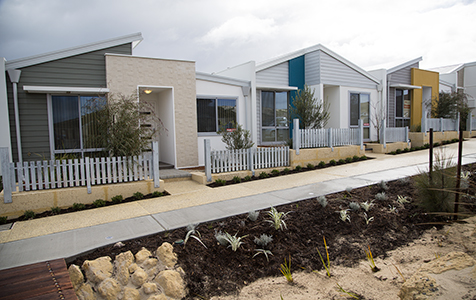 AT THE DOOR: Investors at both middle and higher-income levels benefit from negative gearing.

The perennial debate about negative gearing of residential property investments has been reignited yet again, by two reports in the past month.

The International Monetary Fund has nominated taxes on housing as ripe for reform in order to improve the efficiency of the tax system.

And the Reserve Bank of Australia has argued that housing credit to investors has become excessive and is driving up house prices.

Although neither report specifically recommends changes to negative gearing rules, the mere suggestion that we look at housing taxation or lending for housing investment is enough to awaken the anti-negative gearing lobby.

Before we go on, a definition: negative gearing arises where the interest on money

borrowed for investment in an income-earning asset is greater than the income earned from that asset. The asset is said to be negatively geared.

Investors are prepared to bear this income loss if they think the price of the asset will rise sufficiently to more than offset the income loss. What upsets some people is that the excess of interest over income is allowed to be deducted against income from other sources, such as wages or business income, for the purpose of calculating taxable income. Critics see negative gearing as the source of all kinds of evils: it inflates house prices making housing unaffordable for first home buyers and inflates a house price bubble that will eventually burst, causing wider economic problems.

They say it is an unfair tax handout to the rich and it bleeds the government's budget, which

is all the worse in these times of stubborn budget deficits. And, according to some critics, there is no upside – negative gearing serves no useful purpose.

Let's take a look at these claims. House prices have risen by an average of about 10 per cent per year in Sydney and somewhat less in Melbourne in the five years since the global financial crisis.

But in the rest of Australia house price growth has not even kept pace with inflation at 2 to 3 per cent annually.

Part of the growth in Sydney and Melbourne is due to investor demand since, as the RBA notes, housing credit growth is running at twice the rate for investors (about 10 per cent) than for owner-occupiers.

investment demand, negative gearing is not the prime culprit.

The rules around negative gearing have not changed significantly in Australia for at least 25 years, so it can't explain house price growth over the past five years.

Persistent record low interest rates over the past few years is the main driver, which the RBA acknowledges has meant that loans remain affordable. In fact, the ratio of interest payments to household income has actually fallen since 2009.

Sure, if we restricted the tax advantages of negative gearing we would dampen investor demand for housing, which would slow house price growth in Sydney and everywhere else. But at what cost? It would be tougher to rent a property, hurting low-income households.

Rental vacancy rates are already low in and in fact have fallen in the past couple of years. Critics refute this argument. They say that the

vast majority of investment demand is for existing properties rather than investments in new housing stock, which simply drives up house prices.

True, but higher house prices make new housing construction profitable, which boosts the rental housing stock. So restricting negative gearing is a very inefficient way of tackling a perceived house price bubble, which in any case is restricted to Sydney and, as I have argued before, is not about to burst.

What about the fairness argument? The RBA report shows that negative gearing is by no means restricted to the rich. About half of all housing property investors have household incomes under $100,000.

Also, if we want to be fair we have to be consistent. This would mean tackling negative

gearing on other income-earning assets, such as company shares and business ownership. And we would have to explain why we would want to tax the interest income received by the lender but not allow the borrower to deduct the interest paid, which would amount to double taxation.

If we want to tackle fairness in the tax system, there are lower-hanging fruit. For example, we could bring the family home into the pension assets test, address tax avoidance through artificial structures such as discretionary trusts, and tax superannuation contributions at marginal tax rates (as long as we keep withdrawals tax free).

The budget saving argument is also overstated. According to the Australian Taxation Office, the total losses on rental property in 2011-12 were $6.8 billion. Applying an average marginal tax rate of, say, 35 per cent, this amounts to $2.4 billion in tax

However, we would save much less than this if we were to abolish entirely negative gearing for rental property because investors would switch to other investments and other ways of minimising tax.

We need to be clear about what problem we are trying to fix and consider whether there are better ways of doing it.

• This article was first published in The Conversation: www.the conversation.com.au