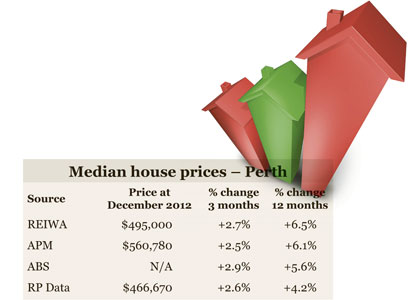 GETTING a precise handle on house-price trends can be problematic but there is one thing on which all four groups that track the Perth market agree - there has been a solid rise in house values in the past year.

Research by Real Estate Institute of WA, Australian Property Monitors, the Australian Bureau of Statistics and RP Data showed strong gains over three months and one year - with prices approaching the record levels of March 2010.

ABS and REIWA quoted the highest percentages of growth in median house prices, with a spike of 2.9 per cent over the past three months and 6.5 per cent for the year to December 2012 respectively.

While all four groups’ growth estimates for the past three months were closely correlated, their calls on December 2012 house price valuations varied significantly.

And house prices have continued to track higher in 2013, according to RP Data.

CommSec economist Savanth Sebastian said: “The lift in house prices in January is certainly exciting - across Australia house prices rose by 1.2 per cent and while that may not sound like much, it is the second biggest monthly increase in property prices in almost three years, and only surpassed by the 1.4 per cent rise last September.”

REIWA president David Airey said a surge in sales of more expensive properties in Perth, in addition to strong first-buyer activity, was behind the rise in prices.

“This scenario is reflected in the fact that the top two suburbs for price growth in the December quarter were outer-suburban, affordable, Calista and gentrified, upper-market Mount Lawley.”

As well as getting more for their investment, figures indicated sellers could expect to find a buyer in less time than before.

“The more interesting news to come from our December analysis is that the number of selling days has dropped from 71 to 62 and the number of sellers dropping their asking price has fallen from almost 60 per cent to around 55 per cent,” Mr Airey said.

The recovery of the housing market was also factored into the Reserve Bank of Australia’s decision on Tuesday to leave interest rates unchanged.

Reserve Bank governor Glenn Stevens said there were multiple indicators that last year’s rate cuts were having an impact on economic activity.

“Housing prices have moved higher, there are early indications of a pick-up in dwelling construction and savers are starting to shift portfolios towards assets offering higher expected returns,” Mr Stevens said.

But Greens senator for Western Australia Scott Ludlam said growing investor returns were masking a more serious issue, which had not been addressed by the two major parties.

“The dream of owning your own home has become a distant mirage for many Australians, and last year the median weekly rent for a house in Perth jumped by $70 to a staggering $470,” Mr Ludlam said.

“We need to see dynamic policies that go to the heart of the problem - neither Labor nor the coalition have put forward a plan to tackle the housing crisis.”