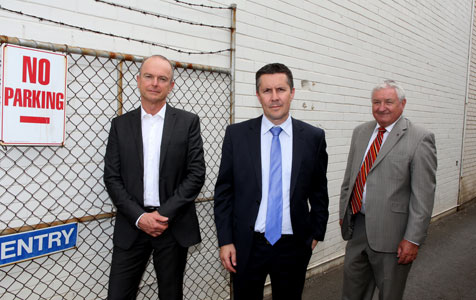 One of Western Australia’s most prolific residential builders, Dale Alcock, is the latest high-profile CEO to help tackle the issue of homelessness by committing to the St Vincent de Paul Society’s CEO Sleepout.

Speaking at the launch of the fourth Vinnies CEO Sleepout to be held in WA, Mr Alcock challenged local business and community leaders to join him on June 20 and make this year the best yet.

He also encouraged those sleeping comfortably at home on the night to give generously, reflecting the fact that the one-night sleepover, at a relatively safe venue such as the WA Cricket Association ground, is a symbolic gesture by people in leadership positions to raise funds as much as awareness of the growing issue.

“Being best known for providing homes for thousands of West Australians, I see the Vinnies CEO Sleepout as a terrific way for me to assist those less fortunate in our community,” Mr Alcock said.

Mr Alcock would not normally be associated with homelessness. Last year his ABN Group was the state’s second most active residential builder behind the Buckeridge Group of Companies (BGC).

Last year, the third Vinnies CEO Sleepout held at the WACA had 106 participants who raised $822,704, as part of a national event in which more than 1,000 people raised $5.3 million.

So far 42 participants have signed up for 2013 and there are more than $8,000 in funds committed to support them. Sign up or support the cause at http://www.ceosleepout.org.au/events/wa-sleepout/

Burswood Entertainment Complex CEO Barry Felstead took out the top fundraiser award in WA last year with a total that climbed past $57,000.

That was third year running that Mr Felstead has won the WA prize – a plump and comfortable pillow.

Nationally, his efforts to raise money for the 2012 program were bested only by three CEOs from NSW, including the chiefs of Commonwealth Bank, Ian Narev, and Westpac, Gail Kelly, who raised more than $100,000 each, and one from Queensland.

The second highest tally in WA was Equatorial Resources CEO John Welborn with more than $40,000, leading a pack of mining and mining services company leaders.

Outgoing BC Iron CEO Mike Young was the last of the CEOs to reach $20,000 on the night of the 2012 event, although this reporter, standing in for Business News CEO Elton Swarts, managed to reach that benchmark early in the morning after the event.

Benz Industries managing director Bob Bollen rounded out the top 10 with $16,575, a higher tally than the biggest fundraisers in several other states and territories.