Hotel operators are sprucing up their digs to attract business as the influx of luxury hotels in Perth ramps up competition. 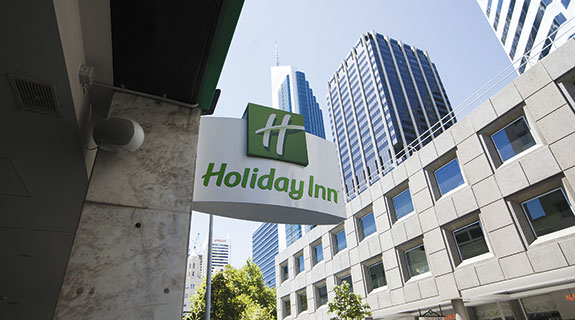 Hotel operators are sprucing up their digs to attract business as the influx of luxury hotels in Perth ramps up competition.

Holiday Inn Perth City Centre will undergo a $12 million refurbishment that will include updates to its guest rooms, public areas and food and beverage outlets, due to be completed by late 2015.

The hotel is the latest to announce renovations, with neighbouring Rydges Perth to undergo a complete refurbishment and become InterContinental Perth in 2017.

“It’s a good time for us to be refurbishing; it’s been seven years since the last upgrade,” he said.

“There’s new product coming into the market and it was coincidental that Rydges was going to be closing for refurbishment. So we might get some benefit from that in the short term.”

InterContinental Perth will be the city’s third IHG-operated property, joining Holiday Inn Perth and Crowne Plaza, and will mark the return of the InterContinental brand after it left Perth in 2012 when its joint venture ended at Burswood.

“I think the old hotels have realised that there’s quite a bit of supply coming up and that supply is obviously going to be better presented, modern and four-and-a-half star plus,” Mr Lawrence said.

Australian Hotels Association chief executive Bradley Woods said the life cycles of all hotels mean that they had to continue to invest substantially in renovations.

He said the growing market capacity and new inventory meant there was a need for further state government investment in destination marketing to bring people to the state and fill the rooms.

“Given that the state has stimulated new supply of accommodation it’s also on it (government) to stimulate demand and tourism visitation and business visitation to fill those additional rooms in the market,” Mr Woods said.

“Otherwise we’ll end up with a very dangerous situation that the government has overstimulated business supply with a view to having this new investment, but done little to encourage more visitations to the state.”

According to the latest Colliers International Research and Forecast Report, occupancy rates in Perth were about 82.4 per cent for the second half of 2014, below Sydney, Melbourne and Adelaide.

The government previously identified a need for 1,900 new hotel rooms to be constructed by 2020.

According to the latest Tourism WA ‘Perth hotel performance and development trend update’, 1,737 new rooms are either recently added, under construction or committed.

Eight projects and 1,461 rooms are committed to enter the Perth CBD market between 2015 and 2018, including the Crown Towers in Burswood.