Hot under the collar over climate language 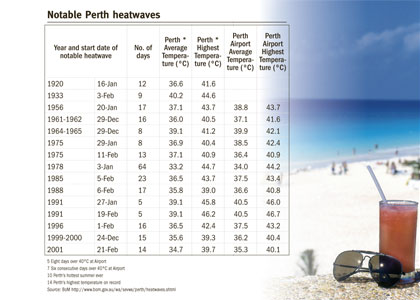 THE debate around climate change has made us all weather watchers.

Even though weather doesn’t equal climate, we’ve all become attuned to how various events are latched onto by those in either camp. When temperatures soared in the late 1990s, those pushing to stop rampant CO2 production did not hesitate to point to the peaks in summer heat to advance their cause.

More recently, a freezing Northern Hemisphere winter and flooding on Australia’s east coast have given cold comfort to those who believe climate variability is less about human energy production and more to do with the unpredictability of nature.

In between, weather watchers like to highlight the extremes whenever they can – even when they don’t exist.

The media of all descriptions was full of the fact that Perth had had a record of eight heatwaves this summer.

Forgive me for being sceptical but I don’t reckon this summer has been particularly hot at all. If there was anything that resembled a heatwave, it was the few days around Australia Day when the humidity, rather than the temperature, made life a little stickier than normal.

I actually thought summer had somewhat eluded us until Christmas.

For the record, I have lived in Perth almost all my life (except for a few years in sun-free London). I’ve been in the city for almost every day of this summer and, like Premier Colin Barnett, I don’t have air-conditioning at home. I also reckon that the older I get, the more I notice heat.

I wish I had air-conditioning in my house only about five days a year. Of course I wouldn’t be without it in the office, which is an entirely different matter because it involves productivity and the inability to escape to the cinema or local pool when it all gets too much.

With that in mind, I went scrambling to find out what suddenly defined a heatwave, such that we could have eight of them in what I reckon is a mild summer. In my view someone is lowering the bar somewhat.

According to everything I’ve read, including the Bureau of Meteorology, a heatwave is three consecutive days over 35 degrees Celsius. That seems a bit weak to me. In London such a temperature spike would be a heatwave, but in Perth?

I did note that, according to BoM literature, Adelaide doesn’t declare a heatwave until it has three days over 40ºC or five days over 35ºC; they must be tougher than we are.

So, of course, once the bar is lowered (or perhaps defined at all), the hype starts. We are told we have had a record eight heatwaves in this summer, so our anxiety about the climate is officially vindicated by the weather.

But go looking for some detail on heatwaves at the BoM and some curious detail emerges. See the accompanying table for what the BoM calls “notable heatwaves”. When I look at those periods, I genuinely think the word heatwave is applicable. The adjective “notable” simply isn’t needed because these are heatwaves and that’s it. What we have experienced this year aren’t heatwaves, in my view, they are just eight ordinary patches of hot weather.

It is a bit like having notable earthquakes. We don’t use that language because anything that isn’t an earthquake is a tremor. Perhaps we need a Richter scale for heat, to help refine the difference between heatwaves.

Intriguingly, the summer of 2004 doesn’t get a listing among BoM’s “notable heatwaves”, even though a hot period in February resulted in Perth’s power system failing (we had 24 hours without air-conditioning in our office, which was, admittedly, fairly nasty), an event that caused enormous political damage to the then state Labor government.

BoM records for the Perth airport show that “heatwave” lasted just four days and only once went over 40ºC; not enough to rate a historical mention even though most of us remember that more than anything that took place before it.

Take 1975, for instance. I remember we had some relatives from Canada who came for a couple of months with the intention of migrating here (including starting the kids at school). The heat that year was all too much and our guests left; the records show why, with two massive heatwaves, one of eight days duration and the second at 13 days.

While the BoM records I have viewed don’t seem to indicate plus 35ºC heat for every day in that period, there were six days above 40ºC and numerous close to it during those two heatwaves. Perhaps, according to the modern-day interpretation of three consecutive days over 35ºC, there were a lot more “heatwaves” in these past years – it’s just they blended into each other to form fewer heatwaves of longer duration.

Which would you rather live through – eight three-day “heatwaves” or one shockingly long one like 1978? That was the hottest summer on record, when the temperature averaged 34ºC over 64 days from January to March although, again, the BoM data for Perth airport I examined didn’t seem to show such a phenomena, with several days below 30C).

When you look at just the sequences of plus-35ºC days in that summer there were four consecutive days in December, then periods of seven days, eight days, three days, three days and six days, through January, February and March.

BoM says that was seven heatwaves, the former record that has just been broken. But just breaking up the sequences into periods of a minimum of three days would create nine “heatwaves” by the modern definition.

Again, I’d prefer three days broken up with a cool change than eight days in a row – but modern terminology would suggest that the worst of these – eight punishing days – is just one heatwave, something that sounds more bearable than two.

It is also worth mentioning that in the recent summer the actual impact of the heat, despite the record eight “heatwaves”, has been negligible in terms of related hospital admissions and heat-associated social unrest.

I might add there was another little point to make about the so-called heatwave we experienced earlier this month. Apart from being a “record-breaking” eighth heatwave for the summer, it also had the biggest gap between the peak at 40.6ºC and the minimum 15.8ºC. To me, that only shows that the overnight temperatures were cooler (I can attest to that) and therefore more bearable. A true heatwave needs to be hot at night to truly lock itself into to my memory bank.