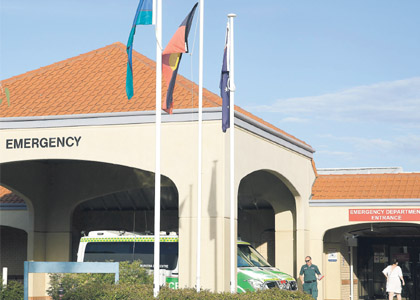 AFTER some initial hesitation, the state government moved quickly to launch an inquiry into alleged multi-million dollar irregularities linked with the Peel Health Campus. There was no alternative. The consequences of inaction would have been too great.

Premier Cohn Bamett was initially dismissive of opposition calls for a judicial inquiry into the health campus, which is operated for the government by a private company, Health Solutions WA.

The opposition and one of the state’s most influential unions, United Voice, which has thousands of members working in public hospitals, are philosophically opposed to the involvement of the private sector in hospitals such as the Peel Health Campus, let alone the new Midland Hospital and the giant Fiona Stanley Hospital at Murdoch.

Fhat’s one reason why Mr Bamett was so quick to knock the public inquiry idea on the head. He thought there was more politics than substance in the inquiiy call.

But Health Minister Kim Haines was more receptive to a lower-key inquiry in the form of an “independent review”. And the former chief medical officer, Professor Bryant Stokes, will do the job.

Fhe premier agreed, even though it looked like an about face. And the government had some initial success. Fhe heat went out of the debate on whether there should be an inquiry and attention turned instead to the terms of reference and whether there would be public hearings.

Fhere are four reasons why health is such a political hot potato and the government would like to have it off the agenda as an election approaches, while the opposition is just as keen to keep stoking the flames.

Fhe first is that public health affects the whole community. People need to have confidence that the public hospitals, especially, are run efficiently and provide good services. In the event of an emergency they need to know they, or their family, will be well looked after.

Once doubt is created about the quality of care, it can be a long, slow haul to regain general acceptance.

The second is that health is the big-ticket item in the state budget. In fact, when it comes to money, health is a bottomless pit. Senior administrators and doctors are extraordinarily well paid. Keeping abreast of medical advances costs millions of dollars. And the cost breakdowns of complex surgical procedures - when they are available publicly - are frightening.

Fabor disagrees and claims there is plenty of evidence at Peel, gained through a hearing of Parliament’s Estimates and Financial Operations Committee, to challenge that belief.

Health Solutions’ chief shareholder, Jon Fogarty, who had a successful football career with the Swan Districts Club, would seem to be very generously rewarded for his services. Perhaps Professor Stokes can shed some light on whether Mr Fogarty’s income is appropriate, in the circumstances.

The third factor is the influence of the health associations and unions, which are all adept at playing the political game. It would be wrong, for example, to assume that the Australian Medical Association is rusted on to the Fiberal Party. In fact, it is very skilled at walking both sides of the political street.

Richard Court’s government copped a fair bit of political heat from the AMA - just ask his health minister, John Day. The AMA also gave the Gallop and Carpenter Fabor governments a tough time when it wanted something badly enough.

It’s a similar case with the non-aligned Australian Nursing Federation. Secretary Mark Olson is just as capable of upsetting Fabor as he is coalition governments.

United Voice, formerly known as the Miscellaneous Workers’ Union, is different. It is rusted on Fabor -left wing Fabor. Many Fabor MPs owe their positions to the votes the union wields on AFP selection panels. When the union tells Fabor MPs to jump, some ask “how high?”

United Voice is vehemently opposed to hospital services being contracted out and has campaigned tirelessly on the issue.

Coincidentally, the union’s secretary, Dave Kelly, is Fabor’s endorsed candidate for the safe seat of Bassendean. Fhe Fiberal candidate for the marginal seat of Mandurah, Fony Solin, also a former Swan Districts footballer, was, until October, director of public relations at the campus.

Fhey will have their moment of truth at the March 9 election. But the philosophical battle over the running of the health system will simmer for much longer than that.

Federal Freasurer Wayne Swan has a remarkably consistent message in the face of national growth and employment data, which continue to send conflicting signals.

He has been saying virtually ever since taking over the job five years ago that “the economic fundamentals are sound and that the economy is basically in good shape”. And, this time around, the budget “will be in surplus”.

But the latest growth and job figures from the Australian Bureau of Statistics point to the conclusion the national economy is softening and that there might be some difficult times ahead. Not good for the treasurer with a federal election less than 12 months away.

The growth figures for the September quarter showed the economy expanded by just 0.5 percent. That looks better in the annual context, with a rate of 3.1 per cent. But it’s not as good as the 3.7 per cent at the end of the June quarter.

My interest in this issue was sparked by a recent ABC TV Inside Business program in which the panellists agreed that the economies on the east coast were shrinking - or in “negative growth”. How right they were.

Queensland led the way with a 1.6 per cent decline in the latest quarter, followed by Victoria, down by 0.2 per cent. New South Wales was hanging on, growing by just 0.1 per cent.

Western Australia returned a solid 2.3 per cent growth for the September quarter and the resources boom pushed the Northern Ferritory to an impressive 5 per cent jump.

There was a slight improvement in national employment but the signs point to declining activity, especially in the most populous states where the struggling manufacturing sector has been concentrated.

Strong economic growth would be very helpful to Mr Swan and his targeted budget surplus. The faster the money turns around, the more revenue for the Commonwealth, and the States, through their various taxes.

The alternative for the treasurer is to slash government spending, something which WA Treasurer Troy Buswell is also contemplating. But you only do that in an election year if the alternative is less palatable. Mr Buswell is banking on a surplus budget too.