How is it possible to remove an incumbent contractor (yet retain a good relationship) and save millions by negotiating with another organisation that agrees to take on greater risk? 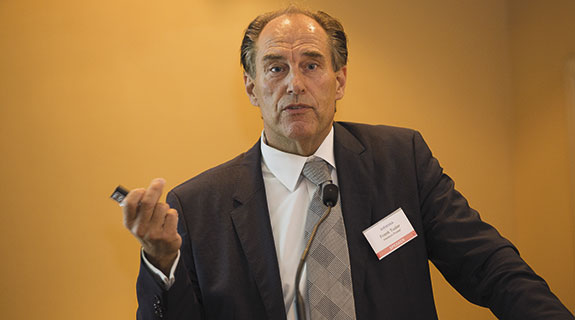 How is it possible to remove an incumbent contractor (yet retain a good relationship) and save millions by negotiating with another organisation that agrees to take on greater risk?

Since making a commitment to reduce taxpayer subsidies to the state-owned entity by $100 million per year by 2018, Horizon Power managing director Frank Tudor told Business News the business had become more astute in its outsourcing negotiations.

Earlier this year, Horizon Power welcomed the commissioning of six new power stations in the Mid West; built on time and within budget at a saving it says of more than $2 million after tax per year over the life of the 10-year contract.

Mr Tudor said the decision last year to relieve Energy Development of its duties in the Mid West, following the expiry of its contract, and sign Contract Power Australia to build six new power stations had proved the catalyst for what was a positive outcome for all parties.

He said Energy Development had ‘ring-fenced’ the transaction and continued to be a valued supplier in other regions across Horizon’s sprawling 2.3 million square kilometres service area. For its part, Contract Power Australia had agreed to a number of arrangements that gave Horizon more flexibility.

“What we’ve done, which I think is quite innovative for us ... is we have allocated risk in the contract in such a way that Contract Power can and will take the risk on the generators,” Mr Tudor said.

“If we choose to replace the diesel generators with renewables then we’ve got provisions in the contract that allow us to be able to do that.”

He said Contract Power, which agreed to wear the risk because it could deploy the generators elsewhere within its portfolio, also accepted a request to set up an off-balance sheet structure.

“That’s also made a significant difference and we’ve avoided in that case about $40 million of debt that would otherwise have been treated as a finance lease and liability on the balance sheet,” Mr Tudor said.

He said Horizon had started considering shorter time frames for some contracts due to the rapid changes under way in the electricity market.

“In some cases you may be better putting in something that’s going to get you through just the next five years, because you’re anticipating significant technology change within that period and you don’t want to lock yourself into something that becomes obsolete,” Mr Tudor said.

However where appropriate, large scale, long-term contract arrangements were also providing Horizon with savings. Instances of this included the major outsourcing of work to engineering firm GHD, which had saved Horizon $6.4 million, he said.

But it was critical Horizon maintained sufficient in-house expertise for both companies to get the best value out of the arrangement.

“You’ve got to remain knowledgeable, credible in the eyes of the counter party as well,” Mr Tudor said.

“And in fact it’s in their interest as well for us to retain that capacity and capability because the client needs to understand and value the service.”

He said despite past examples of some government departments getting caught out by ever-expanding project timeframes and budgets, Horizon had instilled a firmer approach.

“That may have been the case in the past but ... we’ve done a lot to be a lot firmer in our dealings with contracts,” Mr Tudor said.

“And in the case of the Mid West we felt we needed to test the market when that may not have been the obvious thing to do, given that we had an incumbent producer.

“I think that perception insofar as the dealings we have has been turned around. We are forensic and vigorous in protecting the state’s interests and our shareholders’ interests.”